A Mormon church in Utah is throwing a Halloween party for their community. Everyone is invited…unless you’re cross dressing.

I wonder if my favorite costume that I’ve seen so far would be welcome? 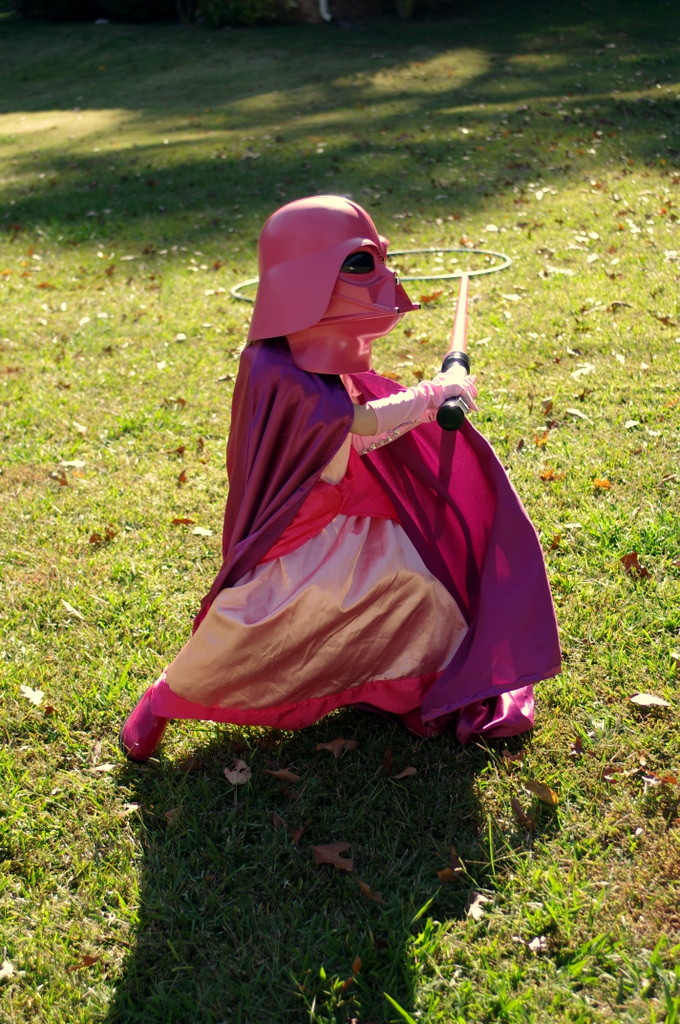 I mean, is Princess Darth Vader gender appropriate? Vader is male, maybe making him Princess-y conforms to gender norms enough for Mormons. I guess these are the tough answers theologians are trained to answer.

…when it’s ironic and blasphemous.* 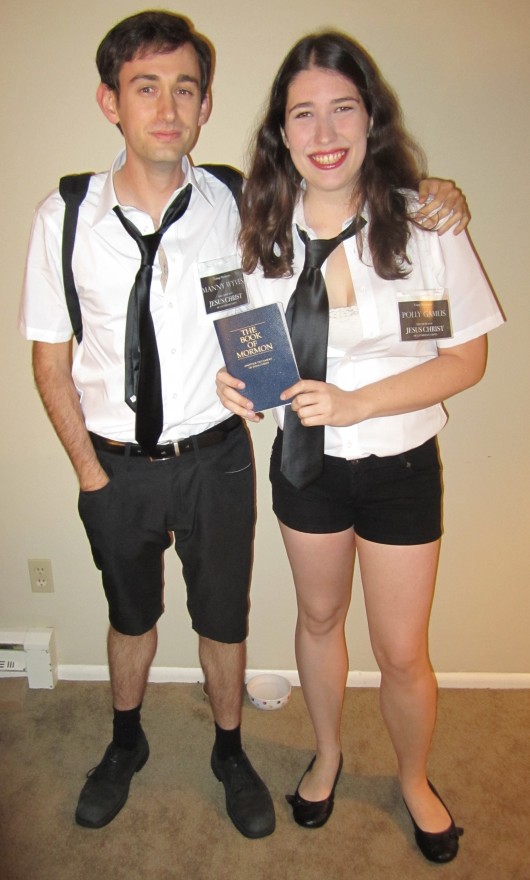 Aw yeah, Sexy Mormon Missionaries. You know this would be a much more effective way of converting people.

Me: I feel a little bad getting a Book of Mormon just to use as part of a blasphemous offensive Halloween costume.
Boyfriend: Think of Prop 8
Me: I don’t feel bad anymore.

And thus, the Book of Mormon spankings begun. 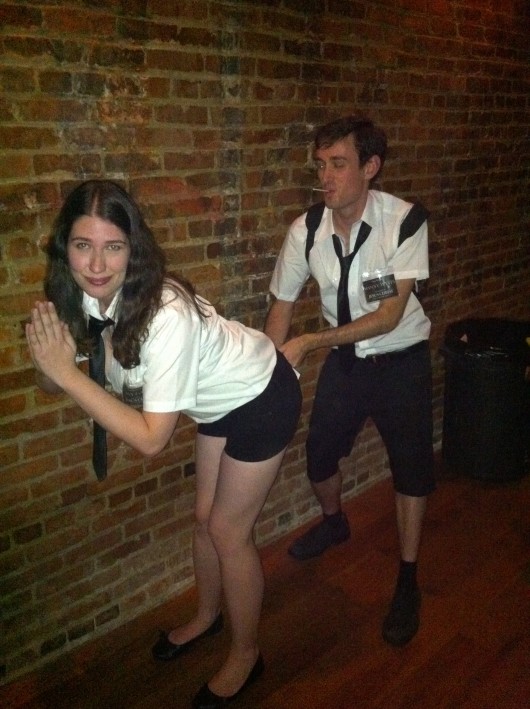 *Not because I’ m against sexy costumes, but because it was freaking cold getting to the party in those hot pants. I have to be pretty entertained to sacrifice warmth.

I went to a Weird Al concert (awesome) and returned home to find healthyaddict, Thunderf00t, and the hosts of Ask an Atheist in my apartment. I have an atheist videoblogger infestation. Send help.

…No, they did not break into my apartment. It is a long and not very interesting story. I rather perpetuate idea that atheist videobloggers come to be via spontaneous abiogenesis.

I feel like I should fight this, saying there’s only room for one internet meme to come out of Purdue…but it involves cute guys being stupid, so I can’t resist:

My thought of “And then they fell and snapped their necks” flitted away once I laughed at the guy hanging off the Amelia Earhart statue outside of the dorm I lived in for a year.

These videos crack me up. Not every dialect oddity applies to me since I grew up closer to Chicago, but it is pretty stereotypical for the rest of Indiana:

…I do this all the time. I always have to edit “anyways” down to “anyway” when I’m blogging. Mumble “prolly” instead of “probably.” And I learned from this video that it’s Meijer, not Meijer’s. Dammit.

Pop is the correct way, not soda. … and I have to try really, really hard not to pronounce “milk” as “melk.” I’ve given up pronouncing eggs correctly – they will forever be aygs for me.

A must watch for all of those straights who have been brainwashed into their heterosexual lifestyle:

I know I said that I didn’t want to talk about Boobquake anymore, but I can’t help myself when data crunching is involved. Well, it’s also hard to ignore when dozens and dozens of people are tweeting at me asking if I’m wearing anything revealing. For the rest of my life I’m going to know when every major earthquake occurs via a very strange alert system.

But when a huge blog like Gawker decides to comment, I feel compelled to reply. Especially when they throw out all knowledge of statistics for the sake of giggling at boobs:

Remember when an Iranian cleric said earthquakes were God’s punishment for scantily-clad women, and then a bunch of scantily-clad women organized a naked protest to disprove the cleric, but then an earthquake actually occurred at the moment they bared their breasts? Well, there is a chance that today’s East Coast earthquake was a boobquake, too, because it’s National Go Topless Day, and there are all kinds of naked boobs in Central Park right now.

I already established that the earthquakes on Boobquake were not statistically significant – that is, they occurred at the same frequency and magnitude that you would expect at random chance. But one of the main criticisms of my “study” was that there was only one data point. I never realized I had National Go Topless Day to add to my data!

So, does bearing some boobage actually cause earthquakes?

Being the giant nerd I am, I’ve spent the last couple of hours looking up earthquake data at USGS, writing simple Python scripts, and plotting things in R. I’m pretty sure this isn’t how my graduate program envisioned me using the skills I’ve learned, but oh well.

I found the dates for the 2008, 2009, 2010, and 2011 National Go Topless Day. Today actually wasn’t National Go Topless Day – that was the 21st. New York was doing their own thing today, so I counted both the 21st and 23rd of days of decreased modesty. I downloaded the worldwide earthquake data for those 5 days plus boobquake, for a total of 6 samples. Now, we want to compare those especially lascivious days to “regular” days to see if earthquakes actually increase. For controls, I got the data for the three days before and the three days after any event. I picked neighboring days to control for any temporal changes that have nothing to do with boobs, but may reflect overall trends.

(As an aside, apparently National Go Topless Day is run by the Raelian cult. WTF? Allah may not support boobs, but aliens apparently do.)

Do boobs increase the number of earthquakes? 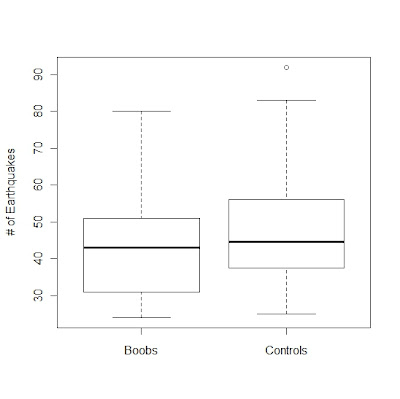 Do boobs increase the magnitude of earthquakes? 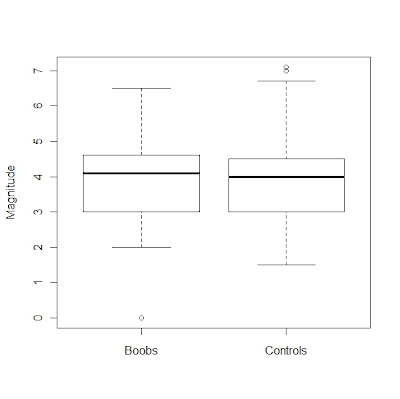 Sorry to disappoint all of you, but yet again, we have shown that boobs do not have the ability to manipulate plate tectonics. Alas, it seems this is another example confirmation bias – remembering the “hits” and ignoring the “misses.”

But if you’re still skeptical, I wasn’t bearing any cleavage when the earthquakes hit Colorado and Virginia today. Hmmm, though I was pantless. My butt isn’t anything to write home about, so many that’s why both of these earthquakes weren’t exactly devastating.


I have to keep reminding myself that I did this for the children. Hooray for Camp Quest! Take that, PZ! 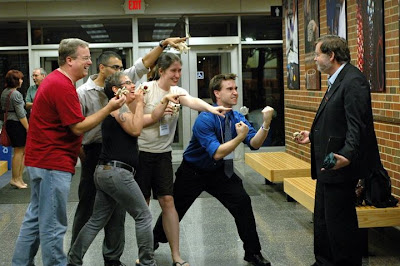 And no, I swear I’m not a chain smoker. I lost my voice from having too much fun at the Secular Student Alliance conference. And yes, that’s the farthest I rode the bike. As in typical Midwestern fashion, a thunderstorm popped up and started to produce a torrential downpour.

Thanks, Ashley, for making the video!

In case you ever wondered where I get it from.

Hemant and I have neighboring rooms in the hotel that are joined by a shared door. We were having trouble keeping the doors open until Hemant had a great idea: 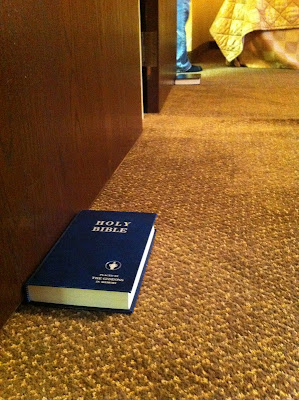 Finally, those hotel Bibles are useful!