No, it’s not to spend years blogging about atheism, giving talks about how fucked up religion is, or helping run atheist organizations. It’s to get retweeted by Dan Savage. I know not all of you follow me on twitter, so I thought I’d share the highlights.

I make a quip, which Dan also retweets:

And then came the flood of angry Christians:

Ironically, she cared enough about my atheism to waste five seconds tweeting at me. 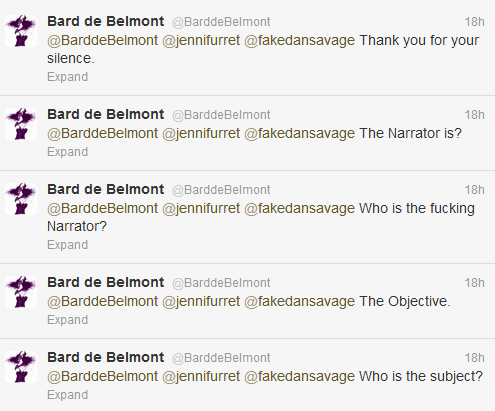 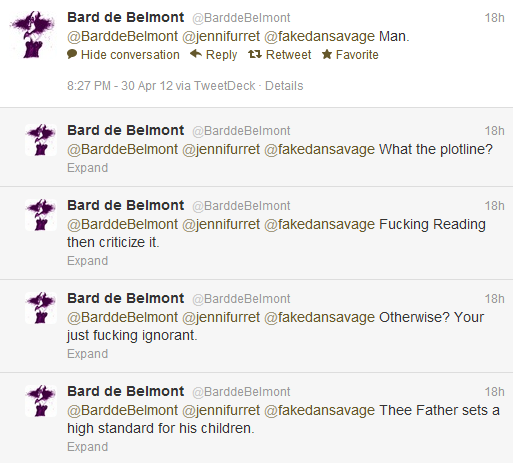 Hooooooo boy, not even touching that one.

But this one was perhaps my favorite:

He never responded. Turns out he couldn’t clarify.

Ted Cox sent me a friendly email this morning alerting me that I made the front page of reddit. It was a photo of me with my Reason Rally sign, and it was being upvoted in r/atheism. I was actually kind of surprised by the comments. While the photo had garnered a lot of upvotes, most of the comments were the tired old trope that I’m an evil New Atheist who’s just as bad as evangelicals because I’m trying to destroy people’s beliefs just because I disagree with them, and that I’ll never succeed anyway. I responded with this to clear it up.

But the comments that didn’t surprise me? The ones about my appearance, which always show up whenever r/atheism links to me:

“Best part of picture: Moderately attractive female in the back right side.”

Not only is my hideous body blocking the view of someone more easy on the eyes, but a glimpse of a possibly attractive woman is way more important than discussing the point of the photo, the sign. A sign about atheism. In r/atheism. Not r/gonewild.

And my favorite, from the lovely named “cuntcrust“:

“she looks like a fat roger waters. she’s annoying and an attention whore “lol look at me i’m an atheists” luckily for her you virgins will fall in love immediately, pathetic.”

Ah, he’s on to me. Yes, you see the atheism thing is all an crafty ploy I created when I realized I was just too egregiously ugly to ever get laid. I call the men I sleep with my “Virgin Sacrifices.” It plays well into the whole feminism thing, too. I hope my boyfriend isn’t too shocked by the realization that he was actually a virgin with a Roger Waters fetish.

EDIT: lol they keep on coming:

You see, he thinks he’s clever because he used the same word that was in my sign, except to insinuate that I’m ugly. Haaaaaa.

If she was better looking I would take this more serious

At least he’s honest about his misogyny.

Obama should tell you this isn’t the 70’s and to not part your hair in the middle. Am I the only one that thinks this chick’s bush is probably huge?

I got nothing, lol

I’m kind of loving this research published in the latest issue of Science, titled “Sexual Deprivation Increases Ethanol Intake in Drosophila.” Science NOW has a good general summary of the paper:

Offer a male fruit fly a choice between food soaked in alcohol and its nonalcoholic equivalent, and his decision will depend on whether he’s mated recently or been rejected by a female. Flies that have been given the cold shoulder are more likely to go for the booze, researchers have found. It’s the first discovery, in fruit flies, of a social interaction that influences future behavior.

I have a new, horrible obsession – the History Channel’s show Ancient Aliens.

On Saturday I found myself drinking with a group of my boyfriend Sean’s friends, when one of them announced that we must play an Ancient Aliens drinking game. I had no idea what the show was, but became intrigued when they started discussing the rules of when to take a drink:

Me: Who’s Giorgio?
Them: Oh, you’ll know who Giorgio is soon enough.

This is Giorgio, by the way: They decided to reduce the list so we would wouldn’t get alcohol poisoning. But I found myself following my own rule of “drink whenever someone says something that blatantly defies logic or is a total non sequitur.” Which meant I was pretty much constantly drinking for an hour and a half. Especially when you’re jumping from pyramids, dragon drawings, Tesla coils, and the Bible all being proof of aliens (just to name a few).

For those of you who’ve never seen the show…I’m not quite sure how to summarize it. The footage looks professionally done since it’s on the History Channel, and some of the shots of the ancient artifacts are cool to see. But if I had to summarize the major theme, it would either be “Brown people never could have done <insert amazing feat here> because they were too lazy and/or stupid, therefore aliens had to help them.” I think my favorite mindblowing moment was when Giorgio explained that:

Something about the show hooked me in its terribleness. My emotional reaction was actually very similar to the time when I visited the Creation Museum. Yes, I was mad at how they were twisting science, using terrible logic, and spreading blatant lies. But the absurdity of it all was oddly amusing. By the end you find yourself playing along, like you’re watching a fantasy novel… and not something people actually believe.

So Sean and I plowed forward to episode two, since the first two seasons are conveniently available on Netflix. Our “game” was to guess what sort of bizzaro conspiracy theory the show would provide to explain a phenomena they were hyping before the show made the reveal. Sean was a little too excited when he correctly guessed the “Humans and aliens had sex and interbred” plotline. To which I replied, “But they’re an alien. Humans can’t even breed with chimps. Humans would have to actually be aliens seeded here or something for interbreeding to be possible.”

And then that’s exactly what the show said, and I nearly peed my pants laughing.

But the real kicker came when the show brought up the human genome. Sean and I both study genomics and evolution, so we exchanged a wary look. I’ll let you see it for yourself. The clip begins at 7:34 in the first video, and continues until 3:03 in the next.

In case you can’t watch the video or had trouble following that pristine argument, let me summarize:

And now, for a quick debunking:

In poking around the internet about this show, I discovered that Giorgio had a twitter account, which included this gem:

Oh, History Channel. How the mighty have fallen. I remember when I was little and I’d watch you with my history-buff dad, and learn all sorts of cool things about Egypt and Rome and WWII. But now I watch you to point and laugh.

Remember how my car randomly flooded a couple of weeks ago? Well, now it’s my apartment’s turn! The apartment above mine had their bath tub’s plumbing leak, resulting in water draining down the wall into my apartment. My hallway carpet is grossly soaked, and is currently covered in towels and has a fan blowing on it. My landlord was very prompt about fixing the leak and says he’ll take care of any damage to the carpet, but it’s still a pain in the ass.

I guess this exposes my biases. I always thought that if I were going to get smited by an angry god, it would be the Christian one. Not because that one is more likely to exist than the rest, but because I make fun of it the most. Little did I know it would be a water god who finally took their wrath out against this atheist. I’m not sure which of the dozens of water gods that may be, but I’m going to guess Poseidon since I’m half Greek.

The title of the advertisement email I received from Amazon today:

The title of the advertisement email I received from Groupon today:

And an early happy Valentine’s Day: 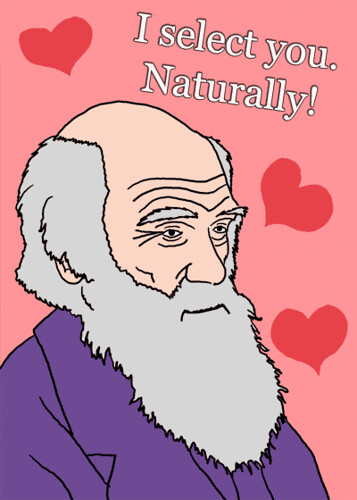 But during both holidays, remember to only participate in evolution if you’re ready: use contraception.

PZ: She was a witch and had a snake that popped out of her hoo-ha to bite people.
Me: Wait, doesn’t everyone?

My boyfriend had a cold last week, which of course means I have a cold this week. The perk of out-of-phase illnesses is that I could bring him burritos when he felt crappy, and now he can make me tea when I feel crappy. And that we get to have conversations like this:

Me: Well, it’s not surprising that you got me sick.
Him: You should have gotten your cootie shot.
Me: God, don’t you know cootie shots don’t do anything and are just a conspiracy by Big Pharma in order to steal all of your money?!
Him: Actually, I’ve heard they cause autism too.

Just wait until you see what silly things I say when I’m on Nyquil…which should kick in in about 30 minutes. Weeeee.

I’m not sure if the authors purposefully came up with a title reminiscent of a personal ad, or if it’s just my overactive imagination. Either way, it makes me giggle. I mean, “long, wide corridors”? What a size queen.

For anyone wondering what the paper is actually about, the authors are looking for particular types of environments in order to investigate if corridors effectively conserve biodiversity. Human urbanization (roads, housing developments, Walmarts) serves as barriers that plants and animals have a hard time crossing. This fragments large populations into a lot of smaller ones that can’t interbreed as much. Small populations are more susceptible to events that reduce genetic diversity, like inbreeding and genetic drift. Decreasing genetic diversity is generally considered Bad, because…well, I’m lazy and Wikipedia does a good job at explaining:

Corridors are often used to attempt to make up for this fragmentation, and the authors want to see if the corridors are actually successful in promoting gene flow between populations. Thus their personal ad that made me giggle.