I spent this weekend exploring Victoria, BC thanks to being invited to speak for the Victoria Secular Humanist Association. It was my first time in Victoria, and my first time driving a car onto a boat. Which I got to do four times! I know, how crazy is that?!?!

…I am from Indiana. Ferries are novel, shush.

The drive to Victoria was fairly uneventful, other than the torrential downpour I drove through. Apparently I was in a part of the Pacific Northwest that’s a temperate rain forest. Not only is that neat, but it washed off the thick layer of pollen that had coated my car, alleviating my worries that I would be stopped at the border for smuggling plant biomaterial or yellowcake uranium or something.

We spent Friday night pub hopping (Canoe, Swan, Bard and Banker). Saturday was for the indoor tourist-y stuff, since it was pouring rain. After stuffing ourselves with delicious breakfast at the Blue Fox Cafe, we checked out the Royal BC Museum. We’re two dorky biology grad students, so needless to say we had a good time. I think I was most amused by the fact that the Museum’s IMAX theater had multiple daily showings for a documentary about beavers. 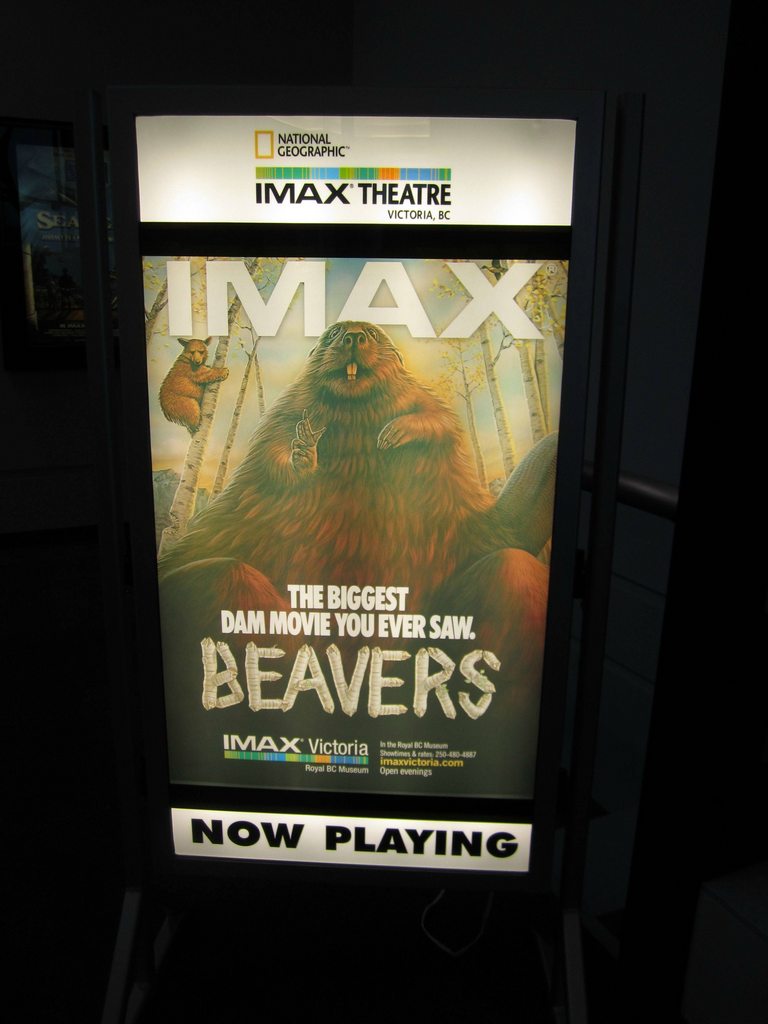 2. Heh heh heh, beavers. I have the sense of humor of a five-year old.

I did learn things, though. For example, the main way Canadians used to finance their Navy was through beer, beer, and more beer: 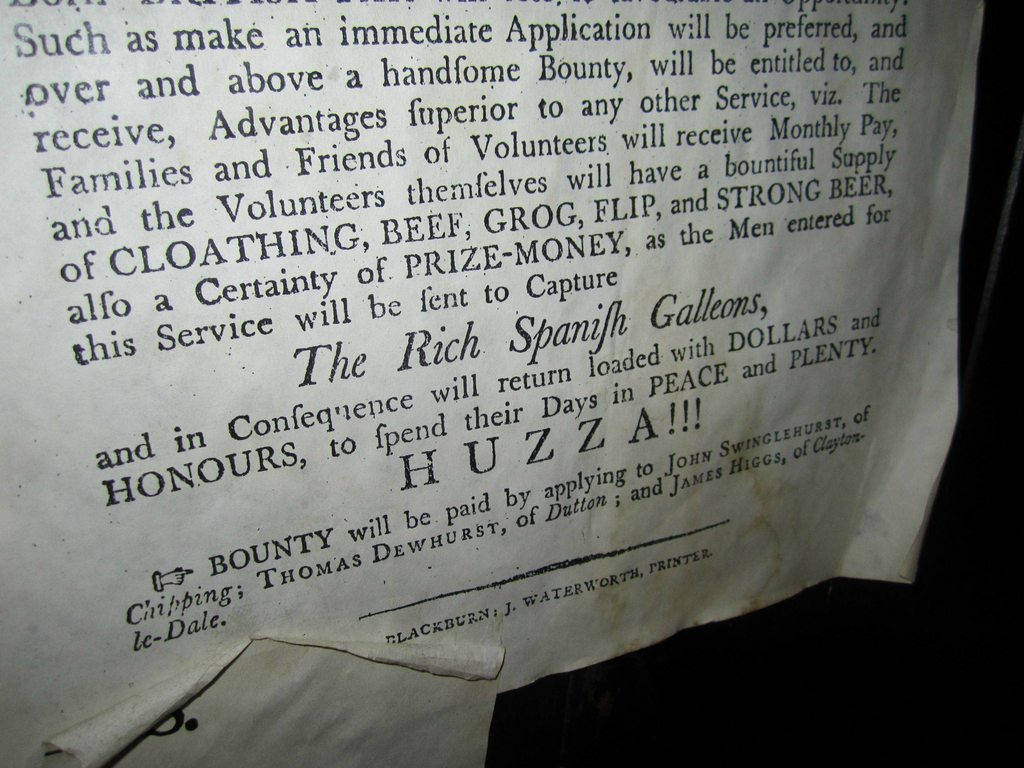 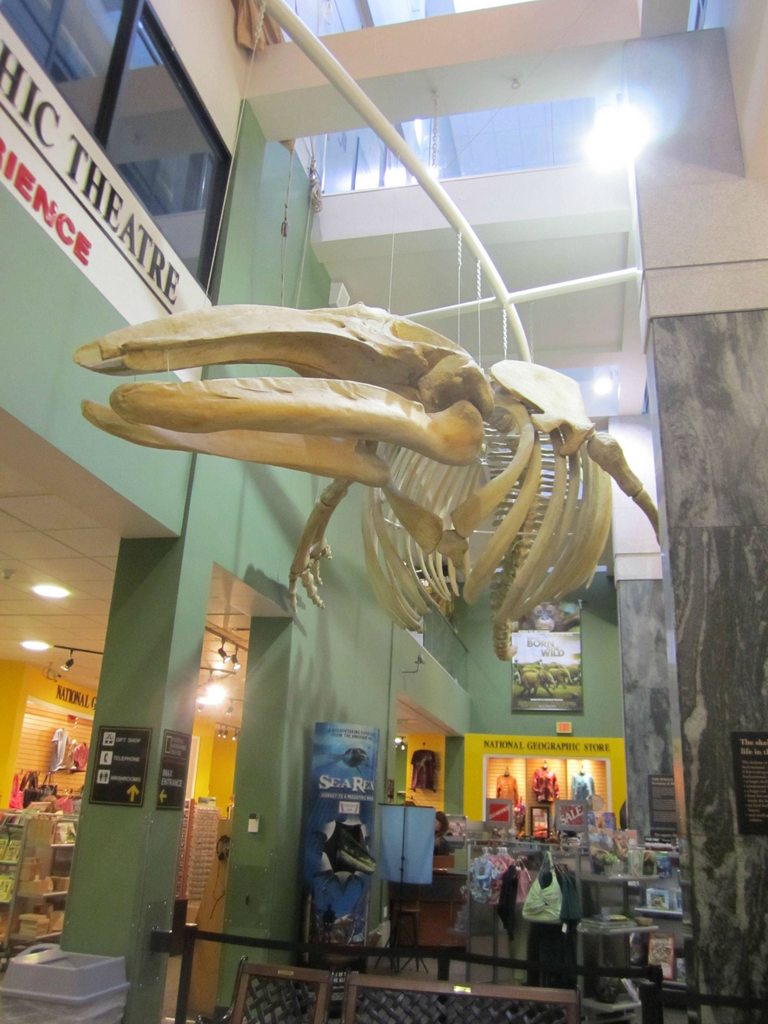 And this needs no explanation: 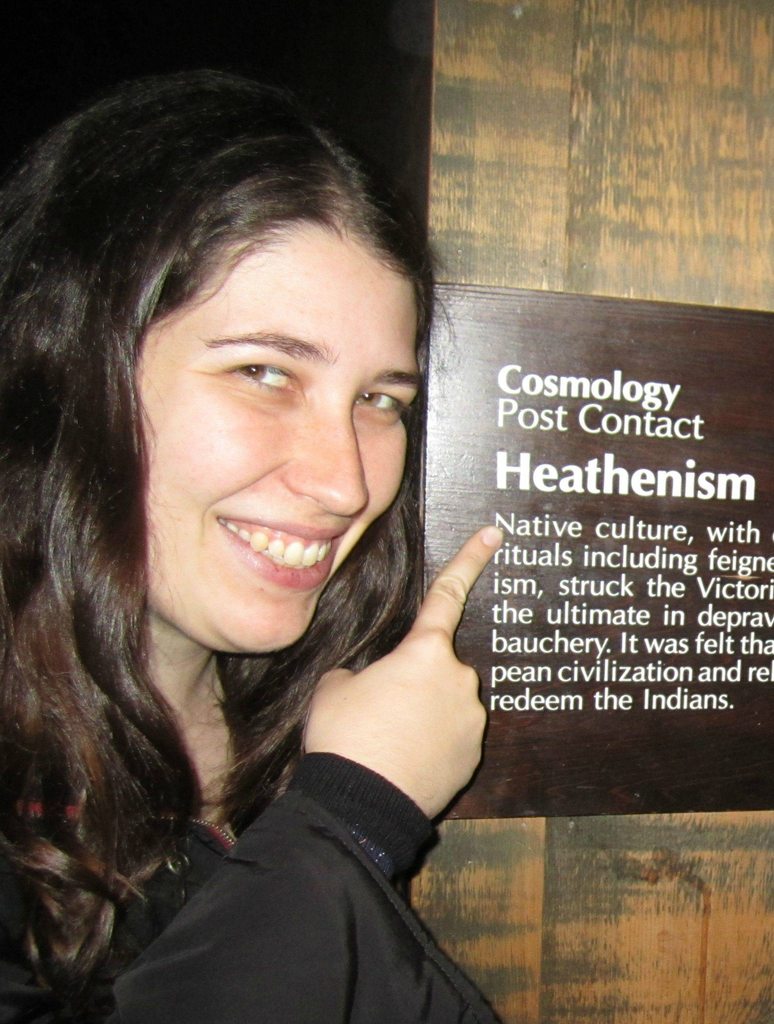 After that we hopped over to the Victoria Bug Zoo, which was freaking amazing. The place was packed with different types of stick insects, leaf insects, praying mantises, Hercules beetles, diving beetles, and more. My favorite was the huge leafcutter ant colony they had living in clear plastic pipes on the walls. You could see the ants hauling chunks of leaves through their tunnels to farm the fungus they eat.

My least favorite section was the corner devoted to spiders. You should have seen my facial expression as I was taking this photo of Sean holding a Mexican redknee tarantula. 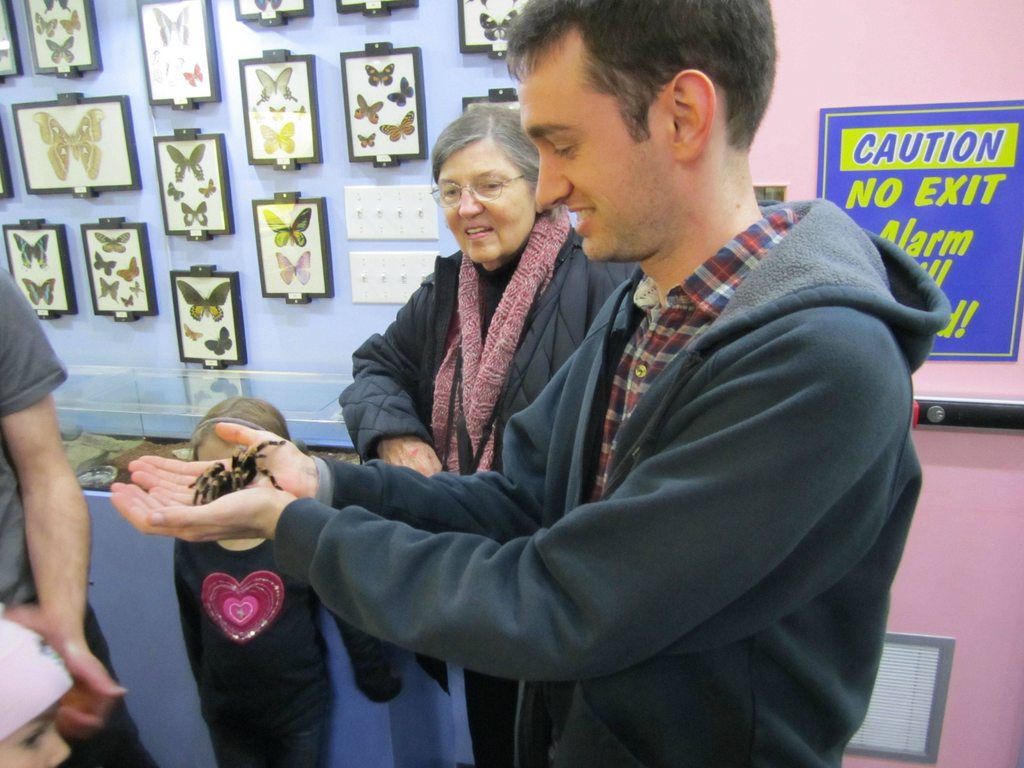 On Sunday I gave my talk about the Creation Museum, which went great. It was awesome meeting some of my blog readers. Hello, guys! I want to give a particular shout out to Sarah, who not only hooked me up with free tickets to Butchart Gardens, but bribed me with stereotypically Canadian chocolate: 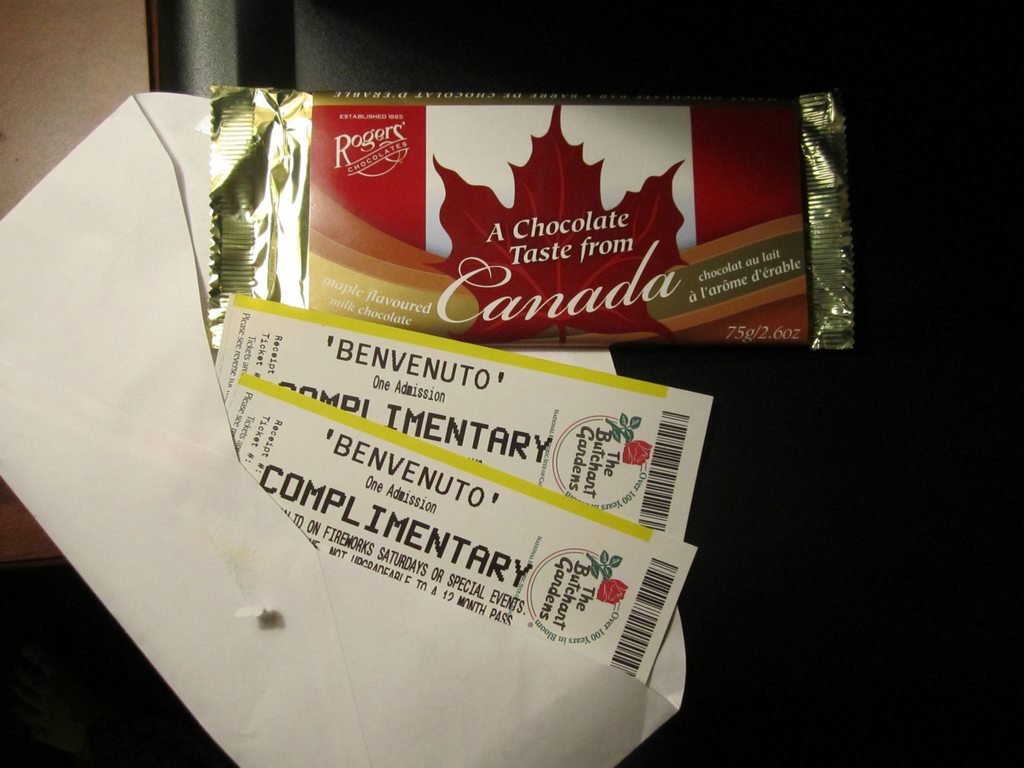 Om nom nom. I am such a chocolate fiend. Can we start a trend where people start bringing me local chocolates, like people bring PZ squid things? I would totally be down with that.

Speaking of chocolates, I’m always surprised how many types of candy bars Canada has that the US doesn’t. I’m seriously jealous. My new tradition is hitting up a convenience store and loading up on all the weird chocolate bars I’ve never seen before: 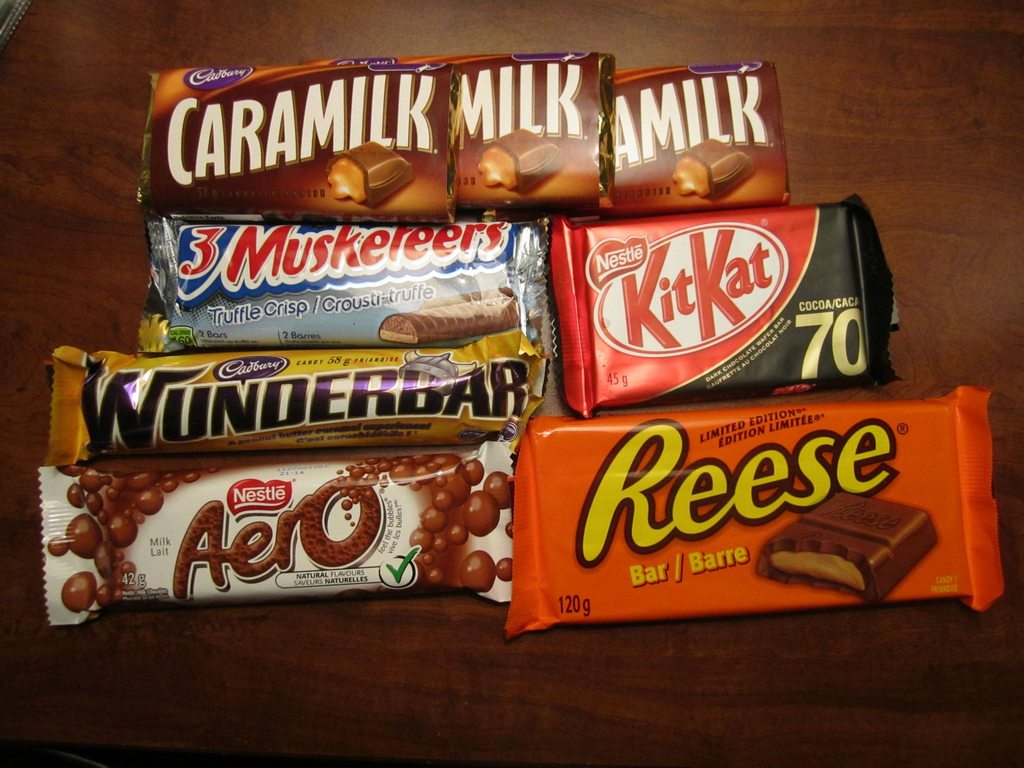 Why can’t I find Caramilk bars in the US? What the hell is Wunderbar and Aero? Your Kit Kat come in dark chocolate? Your Reese’s lack apostrophes and come in bar form?! You get fancy 3 Musketeers?!? WHAT IS THIS MADNESS?

The strange candy bar differences are just one of the many things that makes Canada feel like Bizarro America to me. We’re so similar, so the slight differences are jarring. Canadians pronounce “sorry” really funny, which becomes apparent quickly because you also say “sorry” so much more frequently than Americans. Things are spelled funny like “centre” and “theatre.” “Bathrooms” are universally called “washrooms,” which Sean found hysterical for some reason that I do not quite understand. Your walk signs on street signals are also particularly jaunty and brisk looking, which Sean and I both found hysterical for some reason no other person on the planet will ever understand. And then there are all the hints of Britain, like random pictures of the Queen, or English Candy Shops, or this that I stumbled upon: 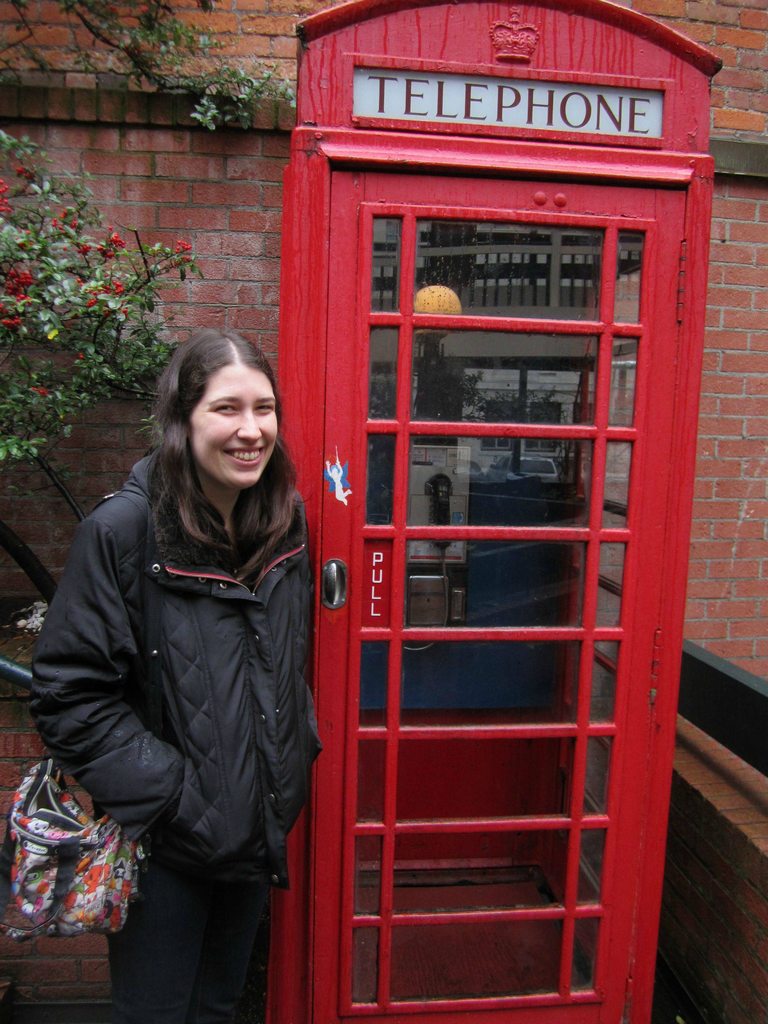 …Yeah, we were pretty much giggly obnoxious American tourists the whole time. It’s because we love you. Please accept me if Bachmann or Perry become president.

The way back was fairly uneventful. I nearly had a stroke when we drove past a store devoted to Twilight, since we were getting close to Forks, WA. And creepily, on every of the four ferries we took throughout the trip, we were behind a mini van from Texas with one of those “Jesus is _____” license plates. Obviously a sign from God, not patterns in peoples vacation behaviors and traffic bottlenecks.