It’s sad how predictable the reaction is when you dare say that women should speak out against sexism: 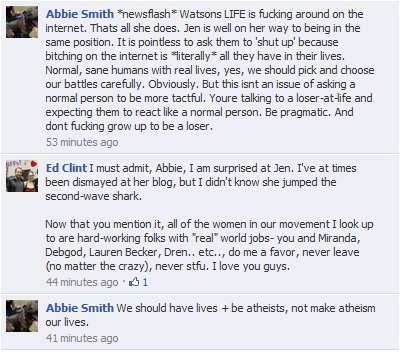 Now if you’ll excuse me, I’m going to go back to writing my NSF application. You know, since I’m a PhD student doing genetics research. And after that, I might just snuggle with my kitten, or play some video games with my boyfriend, or get a drink with friends. Or maybe talk about the vacation to Canada I just took.

Man, being a loser-at-life is hard.

Pro-tip: If you’re one of the concern trolls who was making accusations of ad hominems, it’s best not to make publically viewable Facebook comments that actually are ad hominems. Like saying I’m not hard working, don’t have a “real” job, and using “second-wave” as a dirty word.

Not to mention demonstrating you obviously don’t know what second-wave is, since I’m a third waver true and true. Seriously, if you think I’m the radical…hahaha.