Why am I such an ally to gay rights issues? Why do I care so much about issues that don’t directly affect me? People ask me this all the time, and my responses so far haven’t been lies. I care about my GLBT friends. I care about civil rights. I think the world could use some more fabulous drag shows.

But I’ve always omitted that I personally understand.

I’ve bottled this up so long, that it may take a while to explain. Let’s hop into a time machine and head back 10 years, when I was starting the 7th grade.

But the interesting thing about that conversation was that I didn’t make any judgment call between opposite and same sex attraction. No one had ever explicitly told me “Girls are supposed to like boys.” It must be different for kids being raised in conservative religious families, or really, kids raised in this time at all. Gay marriage is much more of a public issue now, and it’s hard to ignore someone spitting venom on TV about how homosexuality is wrong. Being told one way was the right way wouldn’t have stopped my biology, but it would have definitely drag me down with guilt.

Why? Because a year later I found myself with my first crush, and that crush was a girl.

Oh, it was awkward, and it was heartbreaking – but mostly because that’s how all crushes are to a 13 year old girl. I was just lucky that I never thought it was sinful or wrong. I wasn’t religious, and I was delightfully oblivious to the people who thought my feelings were disgusting.

But it still wasn’t easy. There was something overwhelmingly horrible knowing the odds are against you – that, if you’re rounding up, maybe 10% of people would also be interested in the same sex. I couldn’t get my friend out of my mind, but I knew the odds of her feeling the same way were slim to none. It’s terrible liking someone without them liking you back, but it seems just a tad more terrible when you know there’s literally nothing you can do about it. No amount of persuasion will change their biology.

Eventually after much agonizing, I told her. And because she’s a wonderful person, she didn’t freak out or blab my secret. I knew she was pro gay rights, but I didn’t know how she’d handle being the object of someone’s infatuation. So, it could have been worse. But she still wasn’t interested, so I forced myself to move on.

In high school I started dating guys. It wasn’t an act, or a way to hide away the gay – I was legitimately attracted to guys too. Eventually I discovered the term for this was “bisexual,” and I felt relieved. There was a label for me, and that was comforting at a time where you feel like you don’t fit in. But also in high school I discovered another thing – that there was a lot of hatred targeted toward homosexuals. I was happy I was at least attracted to guys as well. I wasn’t lying by omitting my attraction toward girls, I was just avoiding the constant harassment.

I made my mistake when I felt comfortable enough to tell my friends. My boyfriend at the time laughed at me, though he doesn’t remember his reaction now. I do.

“You’re not bisexual. This is just a phase. Girls just act bi because they want attention.”

I was hurt. I had mustered up the strength to tell him, and all he tried to do was convince me I was straight. I turned to my gay friends for support.

“Uh huh, you say you’re bisexual now. Give it time and you’ll realize you’re gay. You’re just too afraid to admit it.”

At the time I didn’t know it, but apparently this was common enough to have its own name – bi erasure. Thinking that bisexuality doesn’t really exist. And you know what I did?

I started calling myself straight. It was just easier, and I was sick of putting up with the constant debates about my personal preferences. And I was predominantly attracted to men, so it made it easier. I wasn’t shutting down such a huge part of myself like other closeted people do.

Now I’m nearly 23, and I still call myself straight. To be honest, I found the best definition when reading The God Delusion:

Very low probability, but short of zero. De facto atheist. ‘I cannot know for certain, but I think God is very improbable, and I live my life on the assumption that he is not there.’

Except for me, I read it as:

Very low probability of homosexuality, but short of zero. De facto straight. “I cannot know for certain, but I think me having a relationship with a woman is very improbable, and I live my life on the assumption that I won’t.”

I could have called myself a number of things. Bicurious. Heteroflexible. A Kinsey 1. Two beer queer. Eventually I gave up, because all the labels were just silly. I was me. I decided if you want to know who I’m attracted to, you can get to know me instead of judging me from a couple words. I stuck with “straight” because it was good enough and because I didn’t want to constantly defend myself. No one has to defend heterosexuality.

So why did I make this post? Because even though it’s comfortable, it’s a lie. And as a skeptic and a scientist who’s always in search of the truth, it just seemed wrong to keep on lying. Maybe 95% of the time I’m attracted to men, but the other 5% still matters.

But even more importantly, I think it’s necessary to say it to show that everyone doesn’t fit in neat little boxes. Not everyone is 100% gay or 100% straight. Bisexuals don’t always like each sex in equal amounts. Bisexuality doesn’t mean you’re not monogamous, or that you can’t make up your mind. Someone’s sexuality doesn’t necessarily stay exactly the same throughout their lifetime. And if you want to experiment or you have that one person you’d go gay for (or straight for), that doesn’t mean you have to have an identity crisis.

You don’t need a new label. You’re you.

So here I am, saying it. Sometimes I like the ladies. I’ve crushed harder on some of my female friends than on some of the guys I’ve actually dated. Those drunken makeouts weren’t really due to drunkenness that much – I just thought you were hot. I’m disappointed that I somehow made it through undergrad without doing more than those drunken makeouts. I blame my unfortunate tendency to fall for straight women.

I wanted to post this last year, but I chickened out. I almost psyched myself out of it again. The fact that I was so afraid to admit a smidgen of gayness to a welcoming, pro-gay, liberal community really speaks wonders of how hard this is. Bigots want to shame us all into the closet, and we can’t make progress for civil rights until we’re able to be honest about who we really are. So, my secret is out.

Of course, after flipping through photos from TAM, maybe it wasn’t a huge secret after all… 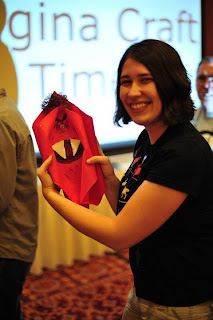 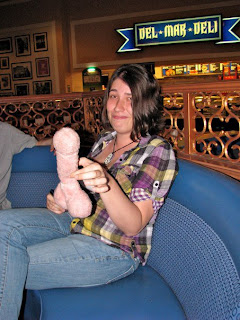 And all the bloggers wept » « Podcast is about to start!