Previously, I talked about the “direction” of the Higgs field, but what does that even mean? It doesn’t refer to a direction in space. There’s hardly any meaning to the direction at all. In fact, I could go ahead and change all the directions and it wouldn’t matter at all. 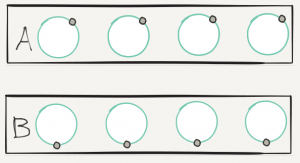 Here’s another issue: What does it mean for the direction of the Higgs field to be “constant” throughout space? On what basis can we compare the direction at two points in space? We use something called a “connection”.  This concept comes from differential geometry, where sometimes you need to move around a vector, while restricting the vector to be tangent to the surface. 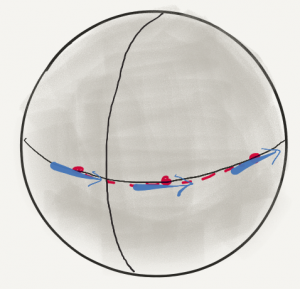 Above, I show a vector (in blue) pointing east transported across the dotted red line.  There is a sense in which the vector remains parallel to itself throughout the path.  This is called “parallel transport”, and the “connection” contains all the information needed to perform parallel transport.  On a sphere, the connection is determined by the shape of the surface, but when it comes to the Higgs field, any connection is possible.  Essentially, the connection defines what it means for the Higgs field to remain parallel to itself. 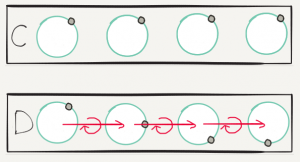 You might be wondering, what is the point of this connection? Why not just use the simplest connection, where up is parallel with up, left is parallel with left, and so on? The problem is, a connection may be path-dependent. As you travel along in space from point X to point Y, it’s possible that the definition of “parallel” depends on the path taken from X to Y. 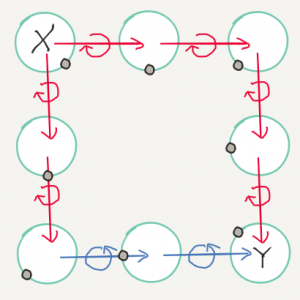 In Figure 9, the connection is arranged such that it is impossible for the Higgs field to be everywhere parallel. (In particular, the bottom row is not parallel.) There is no possible gauge transformation that would remove this issue. We can say that the connection itself contains energy, and the unit of energy is the gauge boson. 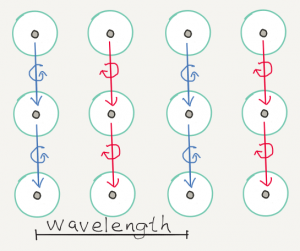 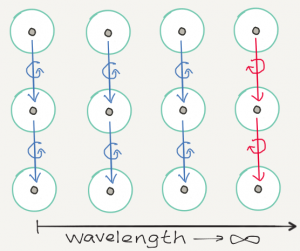 In Figure 11, I show a finite, but large wavelength. As the wavelength goes to infinity, the energy goes to zero, because it approaches a constant connection.

Finally, we add a Mexican Hat potential, which causes the Higgs field to have a nonzero value. 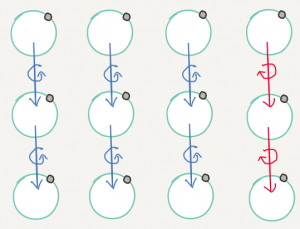 In Figure 12, I show the Higgs mechanism. Because the Higgs field is nonzero, we have to consider whether the Higgs field is parallel at adjacent sites. Indeed, within each column, the Higgs field is not parallel. There’s some energy associated with this non-parallel field, and this energy does not vanish as the wavelength goes to infinity. As a result, the gauge field has mass when combined with the goldstone bosons.

Identity of the gauge bosons

Every field with local gauge symmetry has gauge bosons associated with it, often more than one. The Higgs field actually has four-fold gauge symmetry–in fact, I should have drawn a Mexican Hat with many more dimensions, but for some reason I chose not to. So the Higgs field has 4 associated gauge bosons. Three of those bosons combine with the Goldstone modes to create the Weak bosons, W+, W–, and Z bosons. The fourth gauge boson doesn’t get any mass because of, um, extra dimensions are complicated. Anyway the fourth gauge boson is the photon, the carrier of the electromagnetic force.

The electromagnetic and Weak forces are separated from birth. That’s what we call Electroweak theory.

I hope readers have enjoyed these posts explaining the Higgs mechanism. It was my intention to go beyond standard metaphor. (Imagine a celebrity going through a cocktail party. A crowd gathers around her, causing her to have mass.) My approach maybe gives more insight, maybe less.  Questions and corrections welcome.