COVID-19 pandemic has been dragging on for months by now, with no end in sight. This means that having elections in the middle of a pandemic becomes a necessity. And yesterday we had elections where I live.

Well, we were supposed to have this election back in spring. However, with COVID-19 cases on the rise, nobody wanted to have an election back then. So it was postponed. This is the land of coalition governments, so everybody is already used to having no functioning government for a while every now and then. It’s not like a city cannot survive for four months without a major (we survived).

In my part of the world, COVID-19 cases dropped by the beginning of summer. Closing international borders, testing, contact tracing, practicing social distancing, mandatory quarantines for everybody who is either infected, has been abroad, or has been in contact with somebody infected—it all works, which by now is no surprise for anybody. Anyway, back in June social distancing rules were relaxed and international borders were opened. And no, it wasn’t the result of some politician wanting to pander to populism or worrying about stock markets. Here ministers of health are expected to have a degree in medicine and responses to emergencies are managed by people who have a clue what they are doing. Deciding how strict social distancing rules and travel restrictions you should have is a tradeoff between reducing the number of infections and not totally paralyzing the economy. When the rules got relaxed, the number of new infections increased a little, but so far it remains stable. Here’s the graph:

Anyway, the day for the postponed election finally arrived.

The main election day was Saturday, 29th August. But polling stations were open also for a few days in advance. Normally this is to make sure that people who cannot vote on Saturday are given a chance to do so in advance. This time the main purpose was to reduce crowding—more hours during which people can vote means fewer people inside the polling station at any given moment.

Citizens were also encouraged to take their own pens and face masks to the polling station. At the entrance, there were bottles of hand sanitizer, plastic gloves and also face masks for everybody who had forgotten to arrive with their own mask. People who didn’t have their own pen with them could take a pen, which had to be deposited in a large box after usage so that workers could sanitize these pens before letting the next voter touch them.

Here we have paper ballots. Unlike voting machines, they cannot malfunction or get hacked. Observers are allowed to watch while the votes are getting counted. Political parties usually send their members to polling stations as observers. When numerous people with different preferred election outcomes all sit in the same room while votes are being counted, it becomes impossible for a single person to manipulate the result. Anyway, this is how ballots look like. 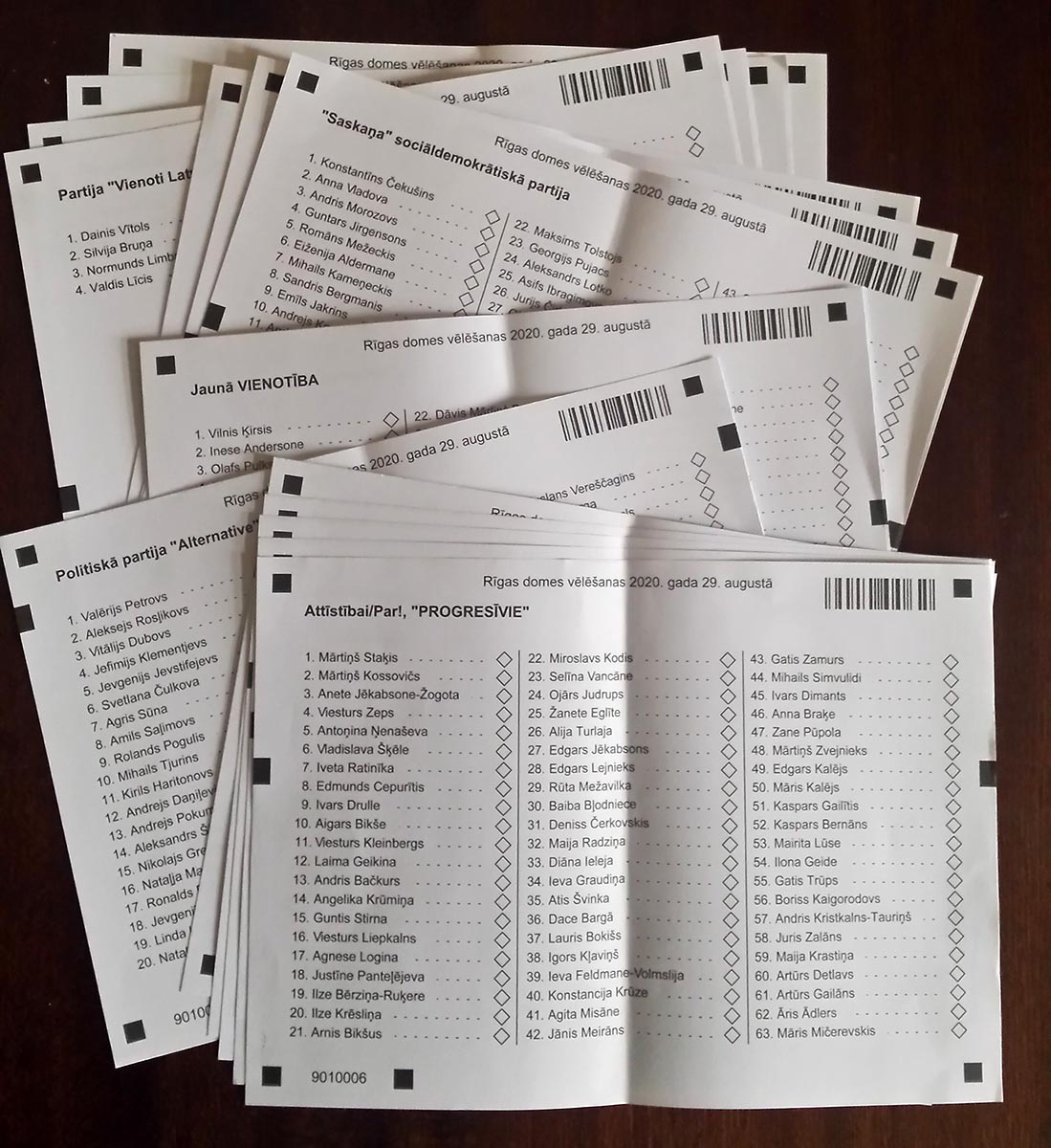 Each ballot is for one of the parties. Pick one party, add “+” to candidates you like and strike out candidates you dislike, put the ballot in an envelope, then put said envelope in the ballot box. Previous years there were individual cabins with fabric curtains so that each voter could pick and fill out their ballot in secrecy. Of course, this time fabric curtains were not an option—everybody would touch them and sanitizing those would be impossible. Instead we had cardboard walls and we filled out our ballots while facing the wall.

On the floor, there was tape indicating where people could stand while waiting in lines (not that there were any when I voted). Basically, you had to keep a two meter distance from other people.

Obviously, workers covered their faces and wore disposable gloves. They also regularly sanitized all the surfaces that voters touched. 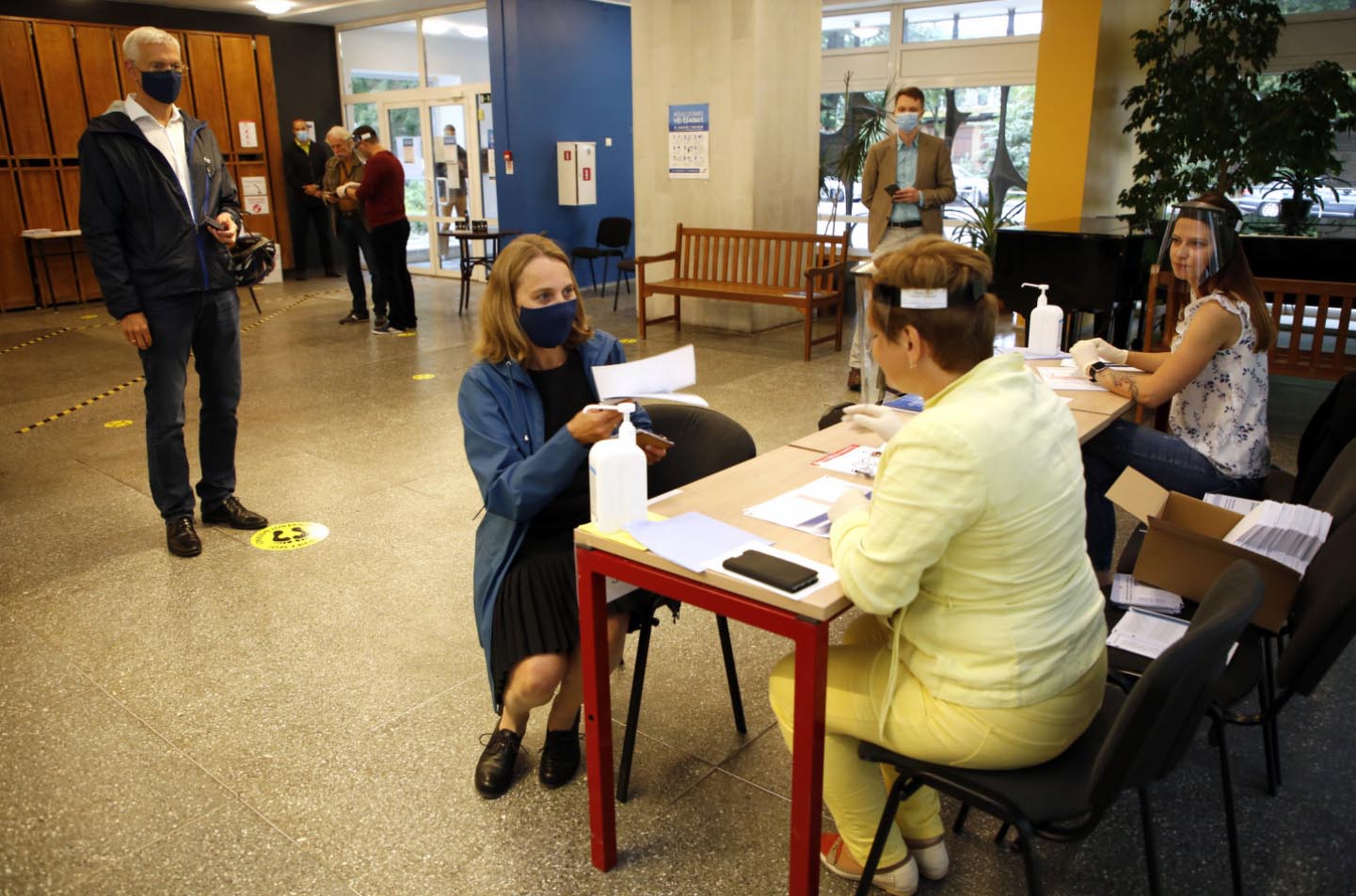 Inside a polling station. Image from here.

Whenever I read other Freethoughblogs bloggers writing about elections in the USA, I have to conclude that theirs is not a civilized country. Anything similar to gerrymandering cannot happen here—the party or candidate who gets the most votes wins regardless of where each voter lives.

Here a huge emphasis is placed on making sure that every citizen can vote. People who don’t have a passport are given special voter cards for free. Prison inmates can vote from inside the prisons. Sick people can vote from their homes. No politician would even think about proposing some law that makes it impossible for some group of citizens to cast their vote.

Voting from home means that a poll worker arrives to your chosen address with the ballots, an empty envelope, and the ballot box. This year, when visiting voters who were either confirmed to have COVID-19 or in home quarantine due to having been abroad or in contact with COVID-19 infected patients, poll workers arrived covered from head to toe in personal protective equipment, which they disinfected after every visited address.

Now that this election is over, I’m looking forwards to seeing how it will impact the number of COVID-19 cases. I really hope that safety measures were adequate and sufficient.

By the way, here postponing an election was no big deal. I mean, it was very unusual, but nobody worried that having an election a few months later once COVID-19 cases have dropped could result in a coup d’état or anything else that was terrible and unconstitutional. Back in spring, everybody agreed that waiting for a while was the reasonable thing to do. I must admit that I was surprised when I saw Americans getting worried about the mere suggestion that an election could be postponed. Then again, many Americans seem adamant to refuse to even wear face masks, never mind any harsher social distancing measures. If the number of COVID-19 cases fails to noticeably drop, there is no point postponing an election anyway.

The Art of Fake Apology » « Size is Relative: When Oversized American Kitchens Are Called “Tiny”