Mitt Romney may have accepted the role humans are playing in global warming — before he was against it. But Tricky Rick Santorum has been priming the misinformation and character assassination industries consistently from the get go. Santorum, speaking at CPAC, demonstrates that, unlike Mittens, he may be sincerely clueless:

President Obama, you may remember, tried to pass cap-and-trade and tried to get control not only of the health care system but of the energy industry, the manufacturing industry, another two big sectors of this economy, and using this facade of man-made global warming. I stood up and fought against those things. Why? because they will destroy the very foundation of prosperity in our country.

So not only are NASA, NOAA, and the National Science Foundation leading a world-wide scientific conspiracy on climate change, these devious scientists managed to infiltrate right-wing think-tanks, covertly develop the Cap-n-Trade concept, and persuade Republicans to embrace it! Right up until Obama suggested it might work, at which point the facade suddenly became an attack on the very foundation of prosperity in our country.

Maybe I’m not being fair. Let’s put that NASA surface station graph in perspective. Aterall, the NASA graph only shows the last century or so: 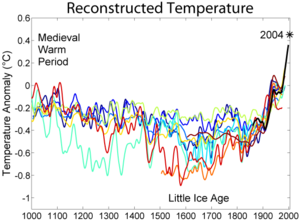 If you want to hear from an actual premier climate scientist, check out this site or Daily Kos on Sunday. I’ll be featuring Dr. Michael Mann, yes, that Michael Mann, the guy who helped discover the paleo-climate record for the last thousand years known as the Hockey Stick above, and who was rewarded for that landmark work with death threats and intimidation orchestrated at the highest levels of government and industry.