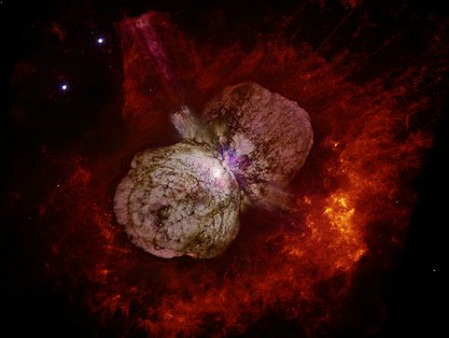 Eta Carinae, 7th sun in its constellation, is not your ordinary star, or even a familiar crusty old red-giant. At the heart of the gorgeous double lobed cloud are at least two massive stars, and one of them is one the most unusual kinds of stellar objects in the universe: an unstable, misshapen blue-white colossus that could burst open and shower this section of the galaxy with deadly gamma rays any day. It almost happened once before, in 1843, when the object suddenly became the second brightest star in the sky for a few weeks. What’;s neat is astronomers have now found a way to study that original light, once thought long gone at the speed of 300,000 KM/sec:

(TimeMag)– To understand how they did that, start with the basic fact that light from the outburst sped away from Eta Carinae in all directions. Some of it headed straight toward Earth to wow 19th-century astronomers. But some of it took a detour, reflecting off of dust clouds in interstellar space in what astronomers call a “light echo.” At least a bit of that echo was redirected toward Earth. The dust clouds were so far from the star that the long-delayed light is only now reaching us, and unlike in 1843, we now have the instruments to study it.

That light is important, because the primary monster lurking deep inside the nebula could deliver a real wallop to the cosmos, one that could theoretically have potent effects even 8000 light-years away here on earth. Stars the size of this one are the best candidates for gamma ray bursts. The best explanation is spectacular event called a hypernova: massive stars that blow their skin and mantle off, where the huge core collapses into a black-hole. Magnetic effects create two poles of super energized particles that go blazing off in opposite directions. The rapidly rotating system may even wobble, spraying the gamma rays over a wide region like a fire hose on a tipping merry-go-round. Even that far away, if earth happens to lay in the path of one of those polar jets, it could substantially change the composition of our upper atmosphere … or worse.

Eta Carina is predicted to go super-nova basically, now. But don’t kiss your ass goodbye just yet. In astronomical terms, that means anytime over the next several million years!