We live in an era when people have the opportunity to broadcast the minutiae of their lives far and wide via social media. It is surprising to me that so many people do not seem to realize that along with the attention they receive, there are also serious pitfalls. In the rush to be in the spotlight and impress their circle of friends and relatives, they seem to lose all sense of judgment. Nowhere was this more evidence on a large scale than in how so many of the people who invaded the Capitol building on January were eager to tell everyone of their exploits.

First of all, they gave the authorities information about their identities that allowed them to be arrested. Secondly, their online posts were effectively confessions of guilt. The best they could hope for was leniency on the grounds that they were too stupid to know that they were breaking the law. But judges are taking their posts into account in determining how harshly to sentence them and they are not amused.

Earlier this month, U.S. District JudgeAmy Jackson read aloud some of Russell Peterson’s posts about the riot before she sentenced the Pennsylvania man to 30 days imprisonment. “Overall I had fun lol,” Peterson posted on Facebook.

The judge told Peterson that his posts made it “extraordinarily difficult” for her to show him leniency.

“The ‘lol’ particularly stuck in my craw because, as I hope you’ve come to understand, nothing about January 6th was funny,” Jackson added. “No one locked in a room, cowering under a table for hours, was laughing.”

Among the biggest takeaways so far from the Justice Department’s prosecution of the insurrection is how large a role social media has played, with much of the most damning evidence coming from rioters’ own words and videos.

FBI agents have identified scores of rioters from public posts and records subpoenaed from social media platforms. Prosecutors use the posts to build cases. Judge now are citing defendants’ words and images as factors weighing in favor of tougher sentences.
…

Prosecutors recommended probation for Indiana hair salon owner Dona Sue Bissey, but Judge Tanya Chutkan sentenced her to two weeks in jail for her participation in the riot. The judge noted that Bisssey posted a screenshot of a Twitter post that read, “This is the First time the U.S. Capitol had been breached since it was attacked by the British in 1814.”
…

FBI agents obtained a search warrant for Andrew Ryan Bennett’s Facebook account after getting a tip that the Maryland man livestreamed video from inside the Capitol. Two days before the riot, Bennett posted a Facebook message that said, “You better be ready chaos is coming and I will be in DC on 1/6/2021 fighting for my freedom!.”

Judge James Boasberg singled out that post as an “aggravating” factor weighing in favor of house arrest instead of a fully probationary sentence.

“The cornerstone of our democratic republic is the peaceful transfer of power after elections,” the judge told Bennett. “What you and others did on January 6th was nothing less than an attempt to undermine that system of government.”

Will this cause people to be more circumspect in what they post online? I doubt it. The lure of instant gratification, the desire to feel validated by racking up ‘likes’ and ‘thumbs ups’ from people they don’t even know, is likely to continue to be sufficient to make them ignore the pitfalls.

It is becoming more and more clear that for many people, the negatives of social media outweigh the positives, but they appear to be trapped by it, unable to escape. 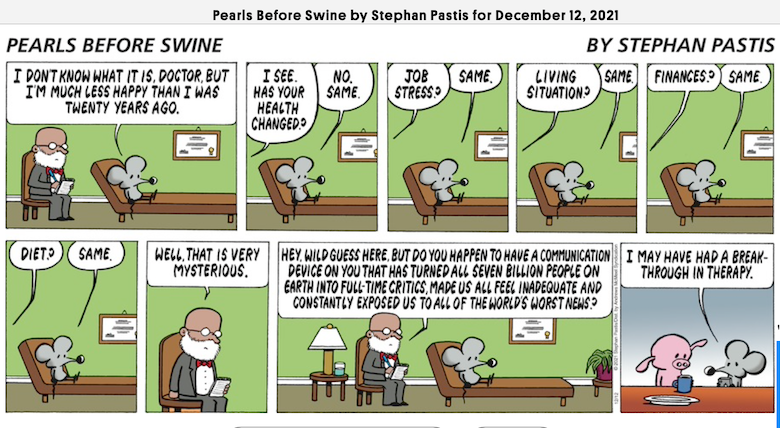 (Pearls Before Swine)
Part of the problem is FOMO, the Fear Of Missing Out. If all the people you know are on Facebook, won’t you be missing out on things, that they are organizing things to do and sharing information that you are unaware of? The real question is how important those things are to you and how important you are to them.

I left Facebook years ago. Currently I am active in some skeptics groups that use Facebook to exchange information and publicize activities. I have told them that I am not on Facebook and they are kind enough to send me emails about major events. So I get the best of all worlds. I hear about major things and never hear all the other stuff that makes up the social media world. If sending me an email were too much of a bother and they chose not to do that, I would be unaware of those events but would not care enough about missing them to join Facebook again. I have other things that occupy my life. FOMO does not move me.