Yesterday saw the tally of global deaths from covid-19 pass the five million mark. This is a staggering number. The number of people who have been infected is close to 250 million, which is over 3% of the world’s population.

These are likely to be undercounts since they depend upon accurate diagnosis and reporting. We may have to wait for a more accurate count of deaths when they calculate the excess mortality. By comparing the number of deaths during the period of the pandemic and subtracting from it the number of people who died during a similar period before the pandemic, that will give us a different, and hopefully more accurate, estimate.

I am someone who does not drink alcohol and never have, except for the very, very rare wine or beer or champagne on some special occasion. The taste just does not appeal to me and it has been very easy to rebuff the attempts of many people who have tried to persuade me that I should drink because they think I am missing something pleasurable or because it is the socially acceptable thing to do.

While I do not miss drinking, I am well aware that there is a whole world out there that I am not a part of and that is bar life. I experience that only vicariously because it is a staple of films. Going by films, it seems to be common for people to spend a lot of time in bars and clubs where drinking throughout the evening is the norm. For people for whom that is a major part of their world, quitting drinking can be difficult because it is not just the alcoholic buzz that they miss but the particular form of social life that goes with it.
END_OF_DOCUMENT_TOKEN_TO_BE_REPLACED

The US Supreme Court yesterday refused to grant an injunction to stop the implementation of Maine’s requirement that nearly all health workers be vaccinated or lose their jobs.

END_OF_DOCUMENT_TOKEN_TO_BE_REPLACED

The US government is outraged, just outraged, that the Myanmar military government has engaged in torture and is demanding that those responsible be prosecuted.

The U.S. State Department expressed outrage and demanded an investigation on Friday after The Associated Press reported that Myanmar’s military has been torturing detainees in a systemic way across the country.

The United Nations’ top expert on human rights in Myanmar also called for strong international pressure on the military. And lawmakers in Washington urged Congress to act in the wake of AP’s investigation, which was based on interviews with 28 people, including women and children, imprisoned and released since the military took control of the government in February.

“We are outraged and disturbed by ongoing reports of the Burmese military regime’s use of ‘systematic torture’ across the country,” the State Department said, using Myanmar’s other name, Burma. “Reports of torture in Burma must be credibly investigated and those responsible for such abuses must be held accountable.”

AP’s report, which included photographic evidence, sketches and letters from prisoners, along with testimony from three recently defected military officials, provides the most comprehensive look since the takeover into a highly secretive detention system that has held more than 9,000 people. The AP identified a dozen interrogation centers in use across Myanmar, in addition to prisons and police lockups, based on interviews and satellite imagery.

END_OF_DOCUMENT_TOKEN_TO_BE_REPLACED

Samantha Bee examines how the funeral industry persuades people to pay far more for funeral costs than is necessary, by not revealing prices up front, by making survivors feel guilty if they don’t pay for premium services, and by falsely telling people that certain things such as embalming are required when they are not.

END_OF_DOCUMENT_TOKEN_TO_BE_REPLACED

When I saw a story on NPR about ‘cricket fights’, I initially thought that it was referring to the attacks by Hindu students on Kashmiri Muslim students who had been celebrating after Pakistan defeated India in the T20 World cup currently under way. There has been a long-standing geopolitical antagonism between these two neighboring countries that has has spilled over into cricket, and Indian cricket fans are notorious for taking losses badly and venting their anger in violent ways. This loss particularly hurt because it is the first time that India lost to Pakistan in any World Cup format. People on social media even attacked a Muslim Indian cricketer for being a traitor. People take sports far too seriously. But the news item was nothing about that.
END_OF_DOCUMENT_TOKEN_TO_BE_REPLACED

One of the biggest lies perpetuated by the oligarchy is that everyone benefits when the wealthy get even wealthier, even obscenely so. This Matt Wuerker cartoon rightly pricks that bubble. 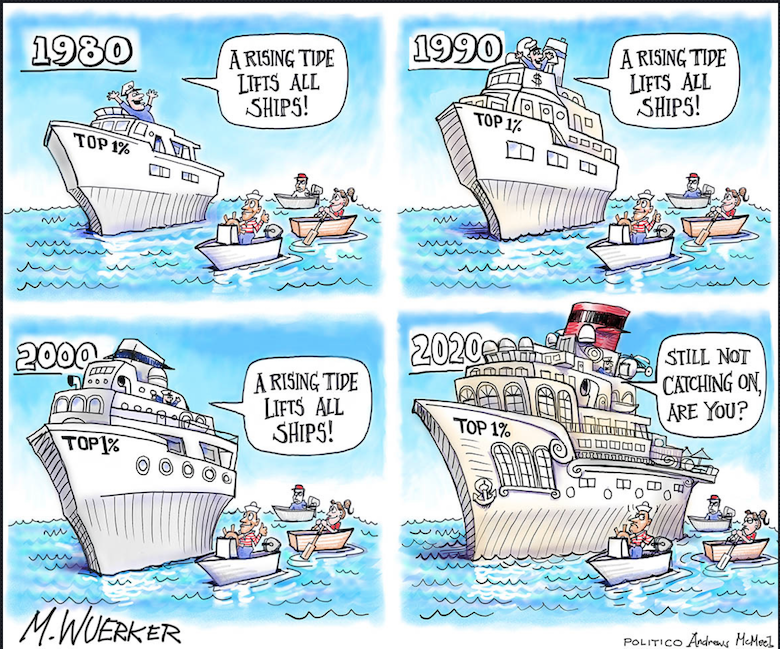 There is increasing awareness these days of the importance of calling people by their preferred names and using their preferred pronouns, if they have stated them. This is a particularly sensitive issue in the case of members of the transgender community where ‘dead naming’ someone, i.e., using the name they have abandoned along with their former gender identity, is seen as wrong, especially if done deliberately.

But being sensitive to how people wish to be referred to and accommodating their preferences is a good thing to do under all conditions and at all times. This seems to me to be the minimal act of respect that we pay to others and why it has become controversial in some quarters is unfortunate. In some societies, people tend to be formal in addressing someone. The rules for how to address others are fairly explicitly laid out unless they are members of their family or close friends when the rules are relaxed. Ats a result, he chances of one committing a faux pas or an insult are small.
END_OF_DOCUMENT_TOKEN_TO_BE_REPLACED

Being an old person myself, I am somewhat attuned to news items about how the pandemic is affecting that age cohort. It is well-documented that the virus has far more serious effects on older people and that the vaccine is their best bet to avoid serious illness and death. It is infuriating that so many older people have succumbed to the misinformation about the vaccines and not taken them.

David Leonhardt of the New York Times reviews the statistics. He says that while the number of cases and deaths are declining nationwide, it could have been much better among the older population.
END_OF_DOCUMENT_TOKEN_TO_BE_REPLACED

One of the lesser-publicized objections to taking the covid-19 vaccines is the fear that side effects may appear after many years. This is, on the surface, a more plausible cause of concern since the vaccines have been around for less than a year and we do not have any data on what effects it might have after periods longer than that. So it is not surprising that some people feel that the verdict is not yet in on long term safety.

But scientists say that this fear can be allayed by explaining how vaccines work. The fact that the vaccines provide immunity for long times, sometimes for life, is not because they stay in the body that long. After triggering the immune response and creating antibodies to the virus, they quickly degrade and go away.
END_OF_DOCUMENT_TOKEN_TO_BE_REPLACED