One sure-fire way to see if something is a cult is what happens within their families and friends. If they are so devoted to a group that they cut themselves off from everyone who does not share their beliefs, then they very likely belong to a cult. The responses to a survey of people who used to have relationships with those they knew who became QAnon devotees shows all the signs that it is a cult. One of them said that the best way to sum up the situation is as a “surreal goddamn nightmare.”

QAnon has ruined lifelong friendships and alienated family members. Those who still speak to one another say their relationships have changed, often beyond repair.

Nobody said any of their loved ones had returned to reality.

“My mom has fallen into the conspiracy beliefs of QAnon,” Samantha, 30, who lives in Texas, told BuzzFeed News. “For months I’ve been trying to bring her back to reality, and I’ve really tried it all.”

Samantha wrote that after her level-headed and college-educated mother became a believer, she could not save her.
…

The author said their friend’s partner is a QAnon believer who makes his own YouTube videos, which is how she was introduced to it. Now her friend has cut herself off from the outside world. “She doesn’t even know what day it is more than half the time.”
…

Marriages and romantic relationships have been tested. QAnon has driven some couples apart, and those who have stuck around describe having to stay on their toes constantly.

“I lost my partner of eight years to Q,” one person wrote. Their partner stumbled onto QAnon through actor Roseanne Barr, who was following a prominent QAnon account.

“I looked up [the account] and began researching Q and became emotionally upset over what my partner was reading and believing,” the person said. Their relationship ended, but they recently discovered that their former partner was telling people the coronavirus is a hoax.

The stories are heart-breaking.

One has to wonder what kind of sick person enjoys spreading false stories and destroying people’s lives. And then you begin to also wonder how sick a society must be for it to have people who find such utterly absurd claims not only plausible but believe in them so strongly that they are willing to cut themselves off from those who have for so long loved and cared for them. 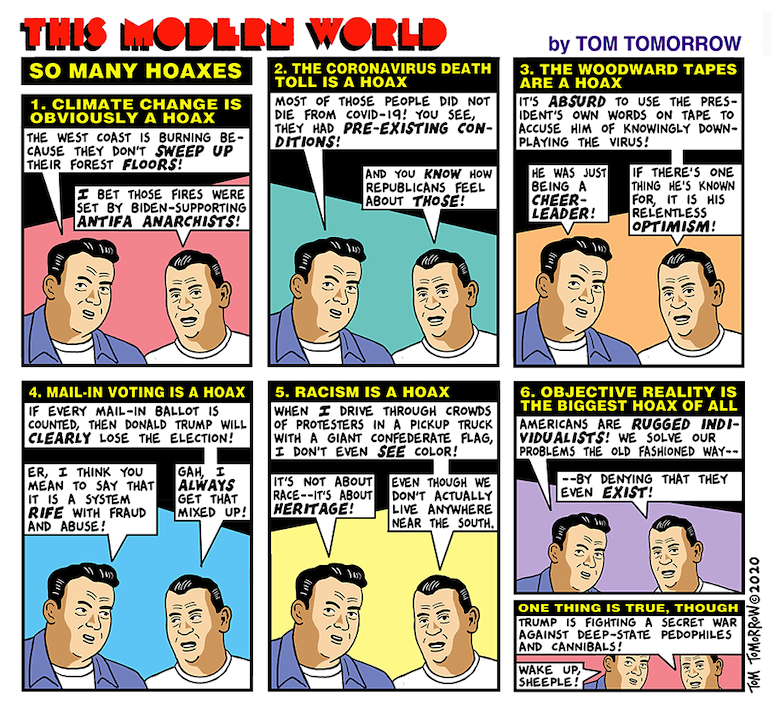 The rise, fall, and rise again of the Brontosaurus » « The importance of down-ballot races