Whenever some bad news comes out that might harm him, Trump says something outrageous to distract people. He has done this so often that the cause-effect relationship is easy to spot.

Take yesterday. There was devastating news that the GDP had shrunk at a whopping annualized rate of 32.9% in the second quarter of the year. That is a devastating number and was the worst loss since the second world war. This means that Trump’s hope that the economy will recover soon despite his incompetence, and that he can ride the wave of a recovery to win re-election, is now is serious doubt. The third-quarter report will be released just a week or so before the election on November 3rd but that will be too late to change the country’s mood.

So what does he do? He throws out the idea that he might postpone the election. This is just nonsense. He does not have the power to set the election date. Only Congress can do that but Trump knows that many reporters and analysts will chase after that squirrel and the terrible GDP news will lose some of the spotlight.

But no amount of smoke and mirrors can hide the reality that many people are hurting and there is no sign of things getting better any time soon.

Meanwhile, despite this bad news and the large numbers of people who have lost their jobs, health insurance, and their homes, the stock market keeps chugging along as if everything is just fine in the economy.

Louie Gohmert is a congressperson from Texas who, in the face of stiff competition from his colleagues in the Republican party, is clearly one of the most stupid and obnoxious people in Congress. I will not bother to list all the stupid things he has said and done because they are easily looked up. Someone should create a Stupidity Index and name it after him. In fact, we should start calling someone whom we think is incorrigibly stupid a ‘Gohmert’. It could also be used as a descriptive term, such as saying, “That was a real Gohmert thing to do”.

He is, of course, anti-mask and since the halls of Congress do not require people to wear them at all times, has been going around without them. Well, he has now tested positive for the coronavirus.
END_OF_DOCUMENT_TOKEN_TO_BE_REPLACED 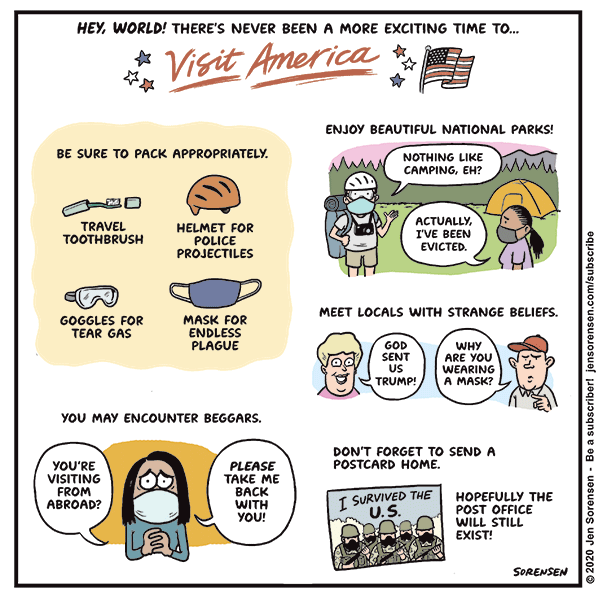 END_OF_DOCUMENT_TOKEN_TO_BE_REPLACED

The US is awash with conspiracy theories. That itself is not surprising since conspiracy theories have long had an appeal for those who think that big events must have big causes and seek to find them by creating elaborate narratives that purportedly tie together many seemingly unrelated facts into a single narrative structure.

What is surprising and disturbing is that so many people seem to be willing to believe them and hucksters are willing to exploit that gullibility to enrich themselves. The PBS investigative news program Frontline has just released the above gripping 55-minute documentary that looks at this question, focusing mainly on one of the biggest creators and propagators of conspiracy theories, Alex Jones. He is so cruel that he unleashed his mobs on the parents of the children who were murdered at Sandy Hook Elementary School by claiming that it was all a hoax, staged by the government. He and his followers made life hell for them. Jones not only feeds the dark fantasies of many people, he also has the ear of Donald Trump who often says in public the things that Jones said a few days earlier.

These are the people now in control of the Republican party and the US government.

These two writers and columnists have both left their positions, decrying what they claim is an atmosphere of intolerance for their views in their respective workplaces. Sullivan has quit New York magazine while Weiss has left the New York Times. Weiss was also one of the signatories to the ‘cancel culture’ letter. It should be noted that they both resigned and were not fired, but in leaving both wrote the kind of self-pitying ‘people are being mean to me’ screeds that prominent people say when they are criticized.

This article describes what led to their respective departures.
END_OF_DOCUMENT_TOKEN_TO_BE_REPLACED

Trevor Noah points out that while some other countries are experiencing a disturbing second wave of coronavirus cases, their numbers are still way smaller than what is happening in the US where the first wave never ended because Trump never put in place the measures necessary because of his beliefs in crackpot theories and not in science.

Apparently back in June, a section of Trump’s border wall in New Mexico fell over, though this only came to light a couple of days ago.

END_OF_DOCUMENT_TOKEN_TO_BE_REPLACED

When Trump announced that he was going to restart the daily coronavirus press conferences, I assumed that it would include the scientific and medical members such as Anthony Fauci, Deborah Birx, and the head of the CDC Robert Redfield. But no. Trump has decided to do them solo. Trump does not even include lackeys like the secretary of health and human services Alex Azar or Mike Pence, the head of the Task Force.

So basically these press conferences are a waste of time because Trump is ignorant and never has anything useful to say but will just ramble and issue statements that are useless at best and dangerously misleading at worst. Trump is just starved for attention and is no doubt hoping that he can reverse the beating he is taking in the polls on his handling of the pandemic and can be seen as more authoritative than Fauci behind whom he lags woefully in the polls in terms of being trustworthy about the issue. Trump is clearly irritated by this and is being peevish.
END_OF_DOCUMENT_TOKEN_TO_BE_REPLACED

Heading in to the election on November 3rd, Donald Trump and the Republicans are bankrupt morally and in terms of any policy ideas.

On Sunday, Trump said that he was too busy dealing with the pandemic to be able to throw the first pitch at the New York Yankees game on August 15th. There was just one problem.

When he abruptly announced on Sunday that he would not be throwing out the first pitch at the Yankees game August 15, Donald Trump claimed that it was because he couldn’t break his “strong focus” on the coronavirus pandemic and a host of other issues he’s never before had a problem ignoring. But the real reason he won’t be taking the mound next month is far simpler: He hadn’t actually been asked.
END_OF_DOCUMENT_TOKEN_TO_BE_REPLACED