Computer generated graphics now enable some pretty amazing visual effects in films. In particular, it has been able to make animations look extremely lifelike. But interestingly, when it comes to depicting humans, there turns out to be a problematic element. As the animation gets more and more lifelike, audiences respond positively, getting more empathetic and engaged, but once it gets pretty close but is still not perfect, audience approval drops sharply and people tend to see the humans as creepy until the animation reaches close to 100% of being lifelike, as shown in this graph. The dip is known as the ‘uncanny valley’. 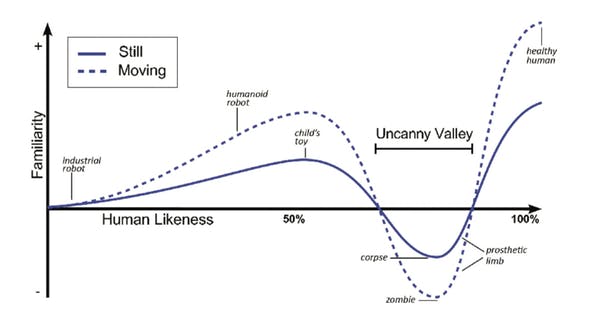 This brings us to the uncanny valley. The term refers to the uncomfortable feeling viewers might experience when they see computer-generated faces that “aren’t quite right.”

The term was coined in 1970 by robotics professor Masahiro Mori. Mori hypothesized that as a humanoid becomes more lifelike, an audience’s “familiarity” toward it increases until a point where the humanoid is almost lifelike, but not perfectly lifelike. At this point, subtle imperfections lead to responses of repulsion or rejection.

He says that a similar problem occurs when films digitally ‘de-age’ actors to portray them at a younger age, as in the recent release of The Irishman that de-ages Robert De Niro, Al Pacino, and Joe Pesci.

Filmmakers have realized that you are safer using depictions of humans that are obviously stylized and caricaturized.

This is largely why the ensuing “Toy Story” franchise ended up featuring toys, not humans, as the protagonists.

It also helps to apply performance capture technology on computer-generated characters who aren’t fully human. That’s what James Cameron did in his 2009 blockbuster, “Avatar.”

The film’s Na’vi species are humanlike but remain an alien species. They’re blue. They have large, radiant eyes. The bridge of their nose is wide and stiff, while the tip of their nose is catlike.

Importantly, however, the animated characters of the film still look somewhat like the actors who played them. Sigourney Weaver’s avatar looks very much like Sigourney Weaver, which helps avoid the “retargeting” problem that occurred in “Polar Express.” Audiences don’t expect the alien race to look or move exactly like humans.