Donald Trump has a strategy for dealing with bad news that has worked for him so far in retaining Republican support, especially in Congress. When news starts breaking about some major transgression, what he does is to first deny that there is anything there and then slowly but steadily concede the truth of elements of the story until the full story (as far as we know) is out in the open. The strategy works on several levels. One is that when he does say that something did happen, his supporters assume that it cannot be that bad if he is willing to publicly acknowledge it. Also since each little bit, by itself, is not seen as too bad, his supporters go on record publicly still supporting him for that little bit until finally they are on the hook for the whole awful mess and there is no going back. They then say that this is old news that ‘everyone’ knew about so it cannot be that bad. It is like the metaphor of the frog in slowly heated water. (I know, I know, that the basis for the metaphor is false and frogs do jump out of slowly boiling water.)

The Ukraine story is a perfect example of this. The facts of the story that are now accepted by Trump are pretty damning. Trump ordered the withholding of military aid to the Ukraine and then later had a phone call in July with the president of that country asking him to dig up dirt on the business dealings in that country of Hunter Biden, Joe Biden’s son. It is not clear what the Ukrainian president’s response was but that is immaterial. The fact of using taxpayer money in the form of the military aid budget to serve his re-election needs is a massive abuse of governmental power.

Cartoonist Jen Sorensen imagines how the phone call between Trump and the Ukrainian president went down. 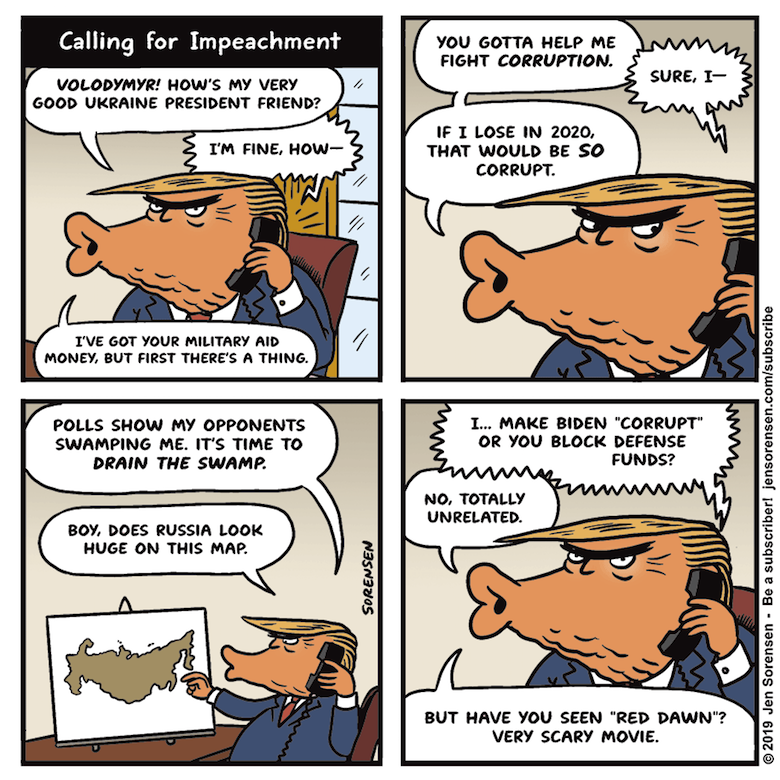 But look at how we got there. It started with a whistleblower leak from an intelligence source that was sent to the inspector general of the intelligence services that there had been an improper promise made in a phone call to a foreign leader. That was initially denied in its entirety and Joseph Maguire, Trump’s acting director of national intelligence, refused to release the whistleblower complaint to congress as apparently required by law. But slowly over time, as more details emerged, Trump changed his story correspondingly. He said that there was a phone call but nothing untoward was said. Then it became clear that the country was Ukraine. Then it was that the call was about Hunter Biden’s private business dealings. Then it was that military aid was conditional on getting the dirt.

Seth Meyers shows how Trump slowly acknowledged the facts of the case, with his lawyer Rudy Giuliani often used as the mechanism for revealing bits and pieces of the story in his inimitable bumbling way.

Then today comes the final, and most damning element, that Trump ordered the halt of military aid shortly before he spoke to the Ukrainian president, which clearly meant that he was intending to use it as leverage.

The Washington Post first reported Trump’s freezing of $391m in aid to Ukraine. Trump ordered his acting chief of staff, Mick Mulvaney, it said, to suspend the payment “at least a week” before the 25 July call with Volodymyr Zelenskiy in which he reportedly asked the Ukrainian leader to investigate the Bidens – eight times, according to the Wall Street Journal.

This is so bad that even Democrats who had beene skittish about impeachment are now calling for it.

The seven new Democrats, all with military and national security backgrounds, wrote in a Washington Post op-ed: “These allegations are stunning, both in the national security threat they pose and the potential corruption they represent.”

The representatives are centrists who won previously Republican-held districts where Trump has been popular, victories key to the Democrats retaking the House last year. They are therefore influential with party leadership.

It is not at all clear that Biden will eventually be the Democratic nominee. If Biden does drop out of the race, then Trump’s efforts will have been for naught.