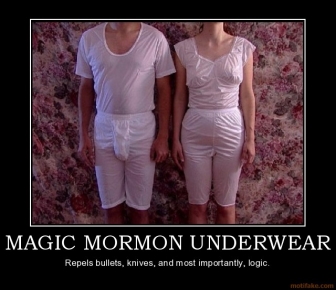 As a result of my post about a Mormon couple who drifted away from their religion and their removal of the secret magic underwear as the symbolic last step in leaving the faith, I got a link to a site called Mormon’s Secret, paralleling Victoria’s Secret, that purports to sell sexy versions of Mormon underwear. Intrigued, I followed it up and their catalog is, frankly, limited. As far as I can tell (not being a Mormon myself), the merchandise seems like the genuine thing, that this is a site that, while tongue-in-cheek, sells actual stuff.

To be quite honest, magic Mormon underwear looks like it would be quite constraining and uncomfortable. I cannot believe that Mormons actually wear it all the time, especially in hot weather and when sleeping, however much they believe that it protects them from all dangers.

I wonder if there are high levels of underwear apostasy in the community, though of course it would be hard to determine. The elders could install full-body scanners like those used by the TSA at the entrance to their temples and maybe have random checks of their followers using underwear police.