We’ve lost the real Avengers: Diana Rigg has died of cancer (Patrick McNee died 5 years ago). The Avengers was one of my favorite campy weird TV shows in the 1960s, and Diana Rigg was the best part of the show.

Mrs Peel may have been a significant influence on the sexual fascinations of many of my generation. Nothing against Steed, but I didn’t watch it for him.

My public commentator blotted out the sun with another volley of exclamation points.

I almost forgot from my last email! You called Michael Nugent the ‘Irish wanker’ which is definitely racist! You, in your various blog screeds, have demonized all whites, men, heterosexuals, especially all white heterosexual men as racists, homophobes, misogynists and religious bigots! You’re in no position to be attacking Sam Harris or Richard Dawkins or anybody else, asshole!!!

I’ve gotten so jaded with all the unseemly revelations from our federal administration that I kind of ignored the latest horror story. Besides, everyone was saying it was based on “anonymous” tips, so his base was just going to call it “fake news” and ignore it. But now I learn the source was 45 himself, that he’d sat down and let himself be recorded on video saying it all.

But still withheld the truth from the public pic.twitter.com/Vovwqb1UXm

Jesus. Did he learn nothing from Nixon? He outright gave an interview to Bob Woodward spilling the beans. There he is in February, declaring that he knew the coronavirus was going to be serious, that it was not just the flu, that it was going to kill a lot of people, and he didn’t act. That little video kills a lot of the excuses that people are using even now to minimize their response to the pandemic.

(It also makes me wonder about Bob Woodward’s ethics, since he sat on such serious information for 6 months while the disease ramped up.)

Now I have questions for everyone, though.

But look on the bright side: 45 has so thoroughly wrecked confidence in the country and killed so many people with neglect, ignorance, and corruption, that maybe your choices don’t matter at all anymore! Just sit back and enjoy your ride into history as part of the Fall of the American Republic! People of the future will be surprised at how quickly it all disintegrated, and we’ll be featured in many pseudo-historical romances and adventure stories and melodramas. Usually as the villain, of course, but the villains always get the tastiest roles.

Oh, hey, I remember the Enchanted Forest in Salem, Oregon! We used to drive by it on I-5 all the time, and we’d gawk and think about taking our oldest child there sometime, back when he was a toddler. That was the early ’80s, before we left lovely Eugene.

It doesn’t look so enticing now. Now it’s the Enchanted Forest from Hell…

On second thought, that might appeal to Alaric even more today.

I’m so sorry, California, Oregon, and Washington. I hear everything is on fire nowadays. Let the rains come soon.

I could listen to this combo all day.

So, there’s a new movie version of Dune coming out, and the preview just dropped.

One catch: the book is unfilmable. I will be stunned if this turns out decently, but I’ll probably watch it anyway, if movies exist then.

Hey! What’s Paul doing with Spiderman’s girlfriend? Let’s see how effective his killing word is against a web-slinging wall crawler — I’m there for that, for sure.

Ha ha, I’m joking. QAnon sounds like the perfect bait to capture a subset of atheists — you know the ones, the same ones that got addicted to culty anti-feminism and regularly logged on to 4chan and regressive reddit message boards and spent a few years telling the world I was a tyrannical pussy-whipped cuck who was anti-free speech. You know the ones. They still pop up on YouTube and FaceBook in my comments.

I think the 4chan/8chan link is the real giveaway. The people there tend not to be your usual evangelical Christians and did preach a lot about anti-authoritarianism, but evolved into a significant groupthink mentality (amusing, since that’s what they accuse SJWs of) that has wider appeal, and has since absorbed evangelicals and New Agers without schism. 4chan/8chan has obviously had deep rifts — the founders are tearing at each other even now — but they spawned a remarkably stable loony cult.

It’s clear that QAnon is a creature of 8chan, birthed from the diseased mind of Jim Watkins, one of the founders of the chan group.

Unlike many cults—which rely on the charismatic appeal of the leader—QAnon works because of the leader’s anonymity. It allows followers to imagine Q as a perfect embodiment of their ideals, working deep inside the structures of government power.

In this framing, Q must conceal their identity and communicate through coded messages in order to continue operating in the upper echelons of the American government. If Q instead turned out to be a pig-farming smut peddler living in the Philippines…that might change things.

As it turns out, the founder of 8chan (since rebranded as 8kun)—where Q has posted those coded messages since abandoning 4chan in November of 2017—has been claiming to know the identity of Q for some time now. According to him, Q is in fact a pig farming smut peddler living in the Philippines—and also the current owner and operator of 8kun…

Since then Watkins has moved to the Philippines, got married, started a pig farm, founded a conspiratorial right-wing news outlet called The Goldwater (that also fetishized Asian women), hijacked the domain of 2channel, and took over 8chan—which has since been under scrutiny by the Philippines’ National Bureau of Investigation for allegedly enabling the distribution of child-abuse materials.

Why would a government informant working to expose a global pedophile ring choose to operate on a website that has itself been labeled as a pedophile ring?

It’s been enlightening to see godless 4chan evolve into godly, sanctimonious, delusional QAnon over time, and atheists should take it as a warning — you’re also susceptible to conspiracy-thinking.

I make a bold prediction: David Silverman is burrowing down into the muck, and when he finally openly adopts a religion, it will be Q.

The University of Minnesota Morris already has 100% of its electricity generated from renewable sources, but as this article explains, we’re also trying to kick the natural gas heating dependency. UMM gets a lot of attention here.

In Morris, the university, the city, and a local health campus have created a “Morris Model” that could result in a shared district energy system and other shared projects. The model sets goals of having 80% of energy in the county to come from local sources combined with a 30% reduction in energy consumption by 2030, said Bryan Herrmann, vice chancellor for finance and facilities.

Morris uses half the power from its wind projects to power the school and then offsets the rest of fossil fuel energy consumption through purchasing renewable energy credits generated by the turbines. It is a complex arrangement configured with assistance from donors and Otter Tail Power, Herrmann said.

The campus now must contend with finding money to retrofit buildings and to move them to low-temperature hot water heating. Goodnough, the sustainability director, wants whatever solution the campus chooses to benefit the local community, including farmers and perhaps other towns in the region. “There are some changes that we’re going to have to make to get us to the future where we’ll want to be,” he said.

Yay, UMM! We’re doing what everyone ought to be doing.

Last chance to support a fun science project, Crow Scientist, the real-world science app for kids. Go read about it, it looks good!

Look at her! So courageous! 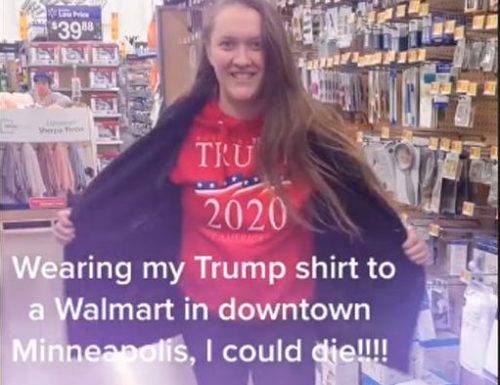 This lady put a video on Tik-Tok in which she wears a Trump shirt, giggles about how the libs might kill her, and flounces away. Only problem: there was nobody else there, no threats, and there isn’t even a Walmart in Minneapolis. I guess the bravest Republican in America is just a lying twit who invents imaginary enemies.