Whoa. If this were on a cop show, I wouldn’t believe this twist in the Alex Jones case. Jones’ lawyers apparently screwed up and sent the complete text contents on Jones’ phone to the opposition lawyers “by mistake” (?), and sprung them on Jones right there in court.

Wow. Sandy Hook parents' lawyer is revealing that Alex Jones' lawyers sent him the contents of Jones' phone BY MISTAKE.

"12 days ago, your attorneys messed up and sent me a digital copy of every text" Jones has sent for years.

"You know what perjury is?" the lawyer asks.

Just want to add that Alex Jones' latent cough came back in full force when his own texts, which he didn't know the Sandy Hook parents' lawyers had access to, appeared on a screen in the court room and he was asked to read one.

They’re also catching him in calling the judge a pedophile on InfoWars.

As cross-examination kicks off, the Sandy Hook family's lawyer grills Alex Jones about whether he broadcast a conspiracy theory that the judge is "involved with pedophilia and child trafficking."

They roll tape on InfoWars broadcasting that very claim.

I get the impression that lawyers dream about moments like this.

The lawyer who just obliterated Alex Jones on cross (Bankston) is strutting around a bit on break, visibly coming down from an adrenaline high.

Well-deserved. He know that was a career-defining moment, and he crushed it. And more importantly, it was in a righteous cause.

So he perjured himself, grossly insulted the judge, and a whole bunch of incriminating data is going to be passed on to law enforcement. I almost feel pity for Alex Jones.

Nah, not a bit of it. A villain is getting the comeuppance he deserves. 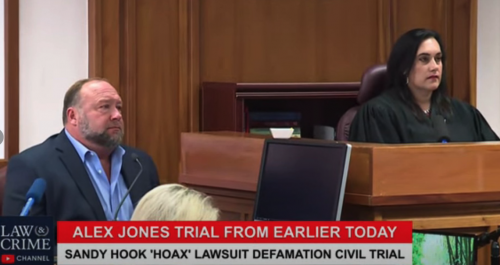 I am kind of wondering what happens to Jones’ lawyers after all this, though.

Also…I’m wishing Ed Brayton would rise from the dead to join me in laughing our asses off at this debacle.

Because I can » « Another week, another data point