I recently finished discussing dosage compensation in my genetics class — you know, the way mammalian females tend to be mosaic for traits on the X chromosome because of the need to maintain a balanced dosage of gene expression for both males and females. The classic example is calico cats, which are almost always female, because the pigment gene on the X chromosome can be one of two forms, either a black allele or a yellow/orange allele, and if you’ve got two X chromosomes and are heterozygous the random inactivation of one X or the other produces a patchwork color. I hinted that there’s a way you can be a calico male, but I haven’t talked about that yet. We’ll get to chromosomal variations in a few weeks, and then I’ll give them this article to read.

The way you can get a calico male is if the cat is XXY. It’s male (usually — there are genetic variations that can change that, too!) by virtue of the Y chromosome, but it has two X chromosomes, so it also experiences randomized deactivation of one X or the other. This is just plain cool. 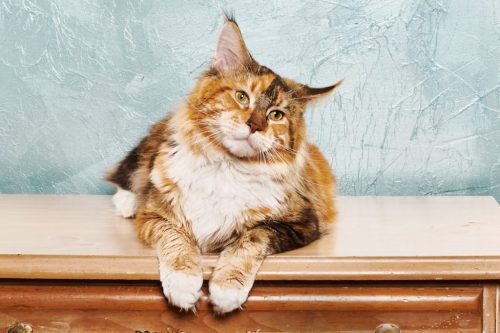 Except…would you believe people discriminate against cats with unusual chromosome arrangements? Of course you would. There are cat exhibitors who treat this male calico as some kind of freak. The article’s author visits a cat show to see Dawntreader Texas Calboy and his owner, Mistelle Stevenson.

I tell the people behind a registration table that I’m from D Magazine and ask where I might find an exhibitor by the name of Mistelle Stevenson.

“Oh, you’re probably here because of the calico,” says a gentleman with a helmet of silver hair, who I find out later is Mike Altschul, one of the weekend’s show managers. “Yeah, we weren’t too happy about that. She’s somewhere over there.” He flicks his hand toward a back corner. As I turn and start to walk away, he bellows after me, “You know, we don’t let three-legged cats in here either!”

I should have known then that I was stepping into some deep and dirty kitty litter.

WTF? He’s a lovely cat. And hey, why would you discriminate against three-legged cats? What’s wrong with these people?

There was nothing in the rulebook against showing male calicos, so Dawntreader Texas Calboy won a few shows, and was kicked out of a few. Then…they intentionally changed the rules to exclude him.

Then, before Calboy had another chance to compete, a sweeping addendum was made to Show Rule No. 30.01 at the CFA’s annual board meeting in February, officially making all “male cats whose color combinations occur only by virtue of genetic anomaly” ineligible from winning titles. Calboy was officially out of the competition. Stevenson was devastated. NBC 5 ran a story, which was quickly picked up by several outlets, including Newsweek. That was why, when I asked Stevenson if I could meet her at the Mesquite show in April, she said she’d be happy to talk, but Calboy would not be present. The climate was “a bit hostile.”

I’ve got news for these people. Every cat is unique, and therefore you can finagle the rules to judge any cat as a “genetic anomaly”.

As an added complication, when Dawntreader Texas Calboy grew up and became an adult, he started catting around and making kittens. This was unexpected: XXY individuals are usually sterile. Oops. So they had him tested. Another genetic surprise!

When the kittens arrived, their colors were all over the place. She wondered if maybe one of the kids let a male out of its room. There was only one way to know for sure. She swabbed the inside of Calboy’s cheek and sent it off to the Veterinary Genetics Laboratory at the University of California, Davis for testing, along with samples from two different colored kittens. They told her the sample was contaminated; Calboy’s results showed two cats. She tried swabbing again, this time videotaping the process to prove the sample was uncontaminated. Again, the lab work showed two sets of DNA. Seeing that the variants on the genes were exactly the same, the lab was able to confirm: Calboy was a chimera.

This is going to be a beautiful example for my class. I’m grinding them through the canonical rules of classical genetics, but later I’ll have to explain that sometimes you have to pay attention to the enlightening exceptions, and it’s not always as simple as you might have been taught in high school biology.