Aww, this is such a sweet story. An anonymous Australian donor gave up a beautiful pet in order to save lives.

The arachnid has been named Megaspider, and the park says she is roughly twice the size of a typical funnel web spider, more comparable to a tarantula.

The 8cm funnel web spider’s 2cm fangs will be milked for venom that can be turned into antivenom.

The Australian Reptile Park on the New South Wales Central Coast is the only funnel web spider venom milking facility in the country and the antivenom produced there saves up to 300 lives a year, the park says.

“She is unusually large and if we can get the public to hand in more spiders like her, it will only result in more lives being saved due to the huge amount of venom they can produce,” he said.

Call me selfish, but if I found a spider like that I’d be tempted to keep her and coddle her and hug her — OK, maybe no hugging — and keep her forever.

I know all of you want to see this gorgeous beast, so I’ll include a photo below the fold. 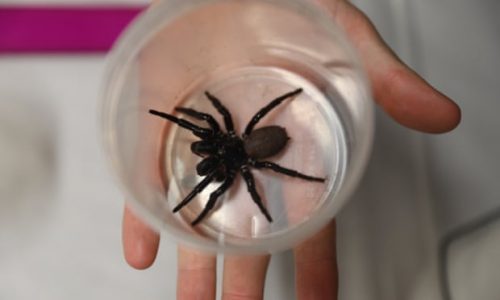