A Moonie splinter cult is now buying up property and using AR-15s as church accoutrements. These are not good neighbors. 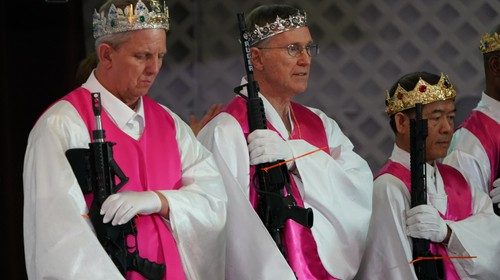 Moon’s congregation, Rod of Iron Ministries, also known as The World Peace and Unification Sanctuary, is a gun-centric spinoff of the much larger Unification Church, founded by his late father, the Rev. Sun Myung Moon, a self-proclaimed messiah and businessman whose followers were famously known as “Moonies.” The younger Moon, who also goes by “The Second King,” split from the main church amid a dramatic falling-out with his mother about who, between the two of them, was the rightful heir to his father’s empire.

In 2017, Moon founded his church in Newfoundland, Pennsylvania, siphoning off hundreds of followers from the main congregation who were willing to make the seemingly radical leap of incorporating high-powered rifles into their spiritual life. He did this with the backing of his older brother, Kook-jin “Justin” Moon, the CEO of Kahr Arms, a gun manufacturing company headquartered nearby. In recent years, he’s made headlines for recreating the mass wedding ceremonies that his father’s church was famous for, with the addition of AR-15s.

I think a good part of the problem here in America is that we have a constitution that says you have freedom of religion, which is interpreted to mean that churches have complete freedom from any kind of regulation, rather than that individuals have freedom of conscience. Similarly, despite the word “regulated” in the amendment that allows people to keep and bear arms, we have interpreted that to mean we get to go crazy with guns. The constitution doesn’t say anything about capitalism, but similarly the parasites have decided that a “free market” implies a total absence of constraint.

Oh, well, we all know how this will end up.

(In case you’ve forgotten your trashy pop culture, that’s a scene from Beneath the Planet of the Apes, where the mutant humans worship a nuclear missile they want to use to destroy the world.)

I’ll probably end up voting for Kamala Harris in the next election » « The poison in Murdock, Minnesota