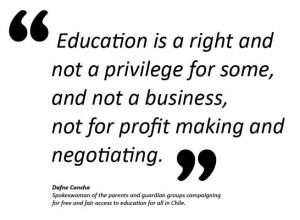 Once again, we must turn to the pages of Teen Vogue to find intelligent commentary. Oh, and this is a good one: do you think universities are liberal bastions? They’re not.

Conservatives continually cite statistics suggesting that college professors lean to the left. But those who believe a university’s ideological character can be discerned by surveying the political leanings of its faculty betray a fundamental misunderstanding of how universities work. Partisan political preferences have little to do with the production of academic knowledge or the day-to-day workings of the university — including what happens in classrooms. There is no “Democrat” way to teach calculus, nor is there a “Republican” approach to teaching medieval English literature; anyone who has spent time teaching or studying in a university knows that the majority of instruction and scholarship within cannot fit into narrow partisan categories. Moreover, gauging political preferences of employees is an impoverished way of understanding the ideology of an institution. To actually do so, you must look at who runs it — and in the case of the American university, that is no longer the professoriate.

Yes, I can look to my peers and see almost entirely politically liberal folk — but it’s not a factor in what we teach, and it’s not even a topic we discuss much. I knew enough that few of us, if any, were going to vote for Trump, but otherwise I had no idea of who everyone’s preferred candidate was, and didn’t have any compelling reason to dig deeper into the details of their political interests. I work in a department full of environmentalists, and that was enough. Which party was going to work against the interests of the environment? That’s all you needed to know.

All of us also take care to not make partisanship a direct factor in our classes. We’re working with rural midwestern students, we know that setting up an antagonistic relationship with conservative students in the classroom is not a productive way to teach.

So what’s happening? Why do I feel so little connection with the interests of those who administer the university? We have become corporate entities.

But from the mid-1970s on, as the historian Larry Gerber writes, shared governance was supplanted as the dominant model of university administration as boards of trustees and their allies in the offices of provosts and deans took advantage of public funding cuts to higher education and asserted increasing control over the hiring of the professoriate. They imported business models from the for-profit corporate world that shifted the labor model for teaching and research from tenured and tenure-track faculty to part-time faculty on short-term contracts, who were paid less and excluded from the benefits of the tenure system, particularly the academic freedom that tenure secured by mandating that professors could only be fired for extraordinary circumstances.

At the same time, Gerber details, the makeup of university boards of trustees became stacked with members from corporate backgrounds who made opposition to academic labor organizing part of the contemporary university’s governance model. These boards exercise enormous power: controlling senior administrative appointments, approving faculty hiring, dictating labor policies, and, most importantly, controlling the university’s annual budget and setting tuition and fees. (Case in point: The UNC-Chapel Hill Board of Trustees recently declined to appoint Pulitzer Prize-winning New York Times reporter Nikole Hannah-Jones to a tenure-track position following conservative outcry over her work on the 1619 project, documenting the history of slavery in the U.S. As one board member told NC Policy Watch, “This is a very political thing. …There have been people writing letters and making calls, for and against. But I will leave it to you which is carrying more weight.”)

Right. Those controlling boards do not resemble in any way the makeup of the academic units they control. There is a ladder to climb in university administration, if you want, but it doesn’t actually lead to a position on the elements that actually have real financial power. Sure, you can dream of being a university president or chancellor (I don’t!), but the ultimate power rests in the hands of political appointees. If you want to get there, you need to have a career that makes you extremely rich…which isn’t an academic career.

At Harvard, the “corporation” that exercises significant sway over administrative appointments and policy includes six MBAs and only four Ph.Ds. Harvard’s “Board of Overseers,” which is charged with safeguarding “Harvard’s overarching academic mission and long-term institutional interests,” includes, among artists and doctors, senior leaders from Goldman Sachs, Morgan Stanley, McKinsey & Company, Google, and the Federal Reserve Bank of Atlanta. It’s likely that boards with a substantial number of corporate managers regard “long-term institutional interests” as including vehement opposition to unionization by graduate workers and a sluggish response to students and alumni calling for divestment of Harvard’s assets from fossil fuels. (Teen Vogue has reached out to Harvard for comment.)

My university is not unionized. It’s amazing how little interest the faculty has in joining a union.

(The article has a section at the end for these institutions to comment. You want to see examples of corporate double-speak and vapidity, check it out. My favorite bit? The University of Oklahoma defends their board of regents by saying, Each member has a proven track record on how to lead a successful business. Exactly. That’s the problem. That’s how universities get turned into businesses.)

The article has some suggestions for how to break this pattern of bad management.

What is the left to do about the corporate capture of the modern university? First and foremost, it must support and spread labor organizing across the country, building on the momentum established this spring with the strike by graduate workers at Columbia University. Second, relentlessly push the Biden administration toward canceling all student debt and supporting free public college for all. Third, assert shared governance on campus and work toward building a democratic university that secures labor protections and fair wages for all faculty, especially contingent and graduate workers. If we don’t act, the corporatization of universities will destroy American higher education.

That second point is essential. It would thoroughly demolish the poisonous idea that the purpose of the university is to make a profit for…who? I don’t know. There are probably lawyers making bank somewhere out of this mess, but it sure isn’t the faculty, or the students, or even the university administrators.

I am inclined to suspect that no one is winning, that this inefficient, wrongly-directed chaos is driven more by fanatical capitalist ideologues in state legislatures who have a deep, misguided belief that everything must be run as a for-profit business, so they shoe-horn education into a badly fitting model to the detriment of all.

I get email » « Iliana helps