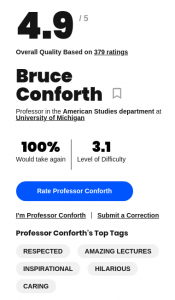 Should I be envious? Look at these scores that Bruce Conforth of the University of Michigan got on RateMyProfessor. This may be the first time in years that I’ve so much as glanced at that hellsite (no, don’t tell me what my score is, I don’t want to know), but I heard all the news about what an inspiring, award-winning instructor he was, so I had to check.

Yeah, “all the news”. You know something awful has happened, because you don’t get national attention for being really good at your job. So let’s get the whole story.

Conforth, a musician and founding curator of the Rock & Roll Hall of Fame, retired in early 2017. His retirement came after three women reported to the University in 2008 and 2016 that Conforth had attempted to engage in sexual relationships with them as students, according to the Times.

Now, six former students have filed legal papers with the intent of suing both Conforth for sexual misconduct and the University of Michigan for failing to provide Conforth with consequences or protect the victims with further investigation and action.

Conforth’s allegations of sexual harassment include unsolicited messages and rape.

Warning: the article gives more detailed accounts of his behavior. It was hard to read through to the end, where you discover that six other professors and administrators at the University of Michigan have been committing unrelated sex crimes in recent years, and the university has only reluctantly acted on them. I guess it’s easier to hand out awards.

We get an idea of the university’s policies from the timeline.

The University claimed to have taken action against Conforth by setting restrictions on him after the first report of sexual assault in 2008, and planned to conduct an investigation after the second two reports in 2016, if Conforth did not agree to retire in 2017.

So…you rape one student, and the U wags a finger at you and gives you a major teaching award a few years later; you have to rape three students before you’re asked to quietly retire and collect your pension. No wonder they’ve accumulated an impressive collection of sex offenders on their faculty.

But he was so popular and enthusiastic in his lectures, you know…

Why does CNN pay Rick Santorum to appear in the news? » « I have a cunning plan