I reported yesterday that the tiniest of my juvenile spiders had vanished, and I feared that she had escaped. I was wrong! She was still there, tucked away under a crossbar of the frame, being shy and quiet. Either that, or she had just taken off for a day to fight crime. She was famished and immediately chowed down on a fly this morning, so that is a possibility.

I also mentioned that in my ongoing lab clean-up efforts, I had unearthed another assortment of microscopical oddments that I tucked away in my cabinet dedicated to antique optics, and threatened to show you some of it. I now make good on that threat.

My predecessors at this university in cell biology, Drs. Abbott and Gooch, collected a few gadgets and were clearly imaging people. Some of it was just lying around in boxes, and when I find it, I fish it out and toss it onto a shelf. It’s really just junk at this point, and I have no use for any of it, but once upon a time these things cost a lot of money and I have a fondness for old technology, so as long as I’ve got the space, I’ll hang onto it.

Here’s the whole cabinet. It’s just a hodge-podge, not organized at all. 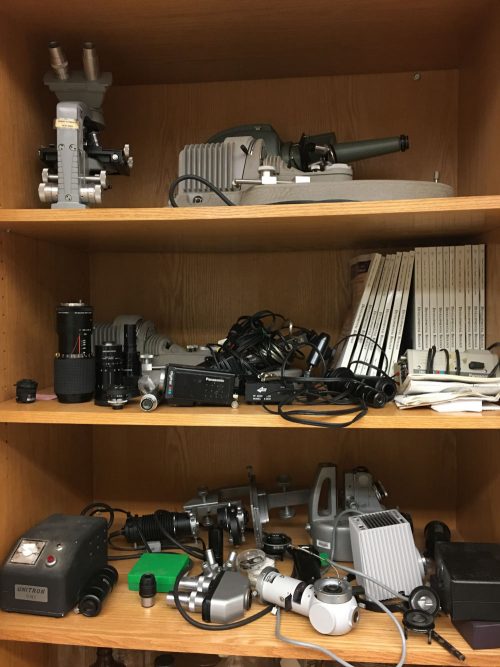 Look at this — a real treasure. That’s a Konica (now Konica-Minolta) Hexanon camera lens! Those, once upon a time, were high-end optics — now though, they don’t fit any camera I’ve got, and you can’t even get adapters to make them work with DSLRs, since the focal length is too short. I’ve thought a few times about collecting old lenses to play with photographically, when I get rich, but this one…nah, sadly, not something I could use, unless I were to also collect old camera bodies. Nope.

There are also a few cheap video lenses in view, and I’ve got a few CCTV cameras that seem to work, if ever I wanted to image stuff with RS-170 again. Ooh, 525 lines of fuzzy resolution. Also lenses from Cosmicar (a division of Pentax) and Computar (which is still around, making lenses), and several C-mount adapters for various microscopes. 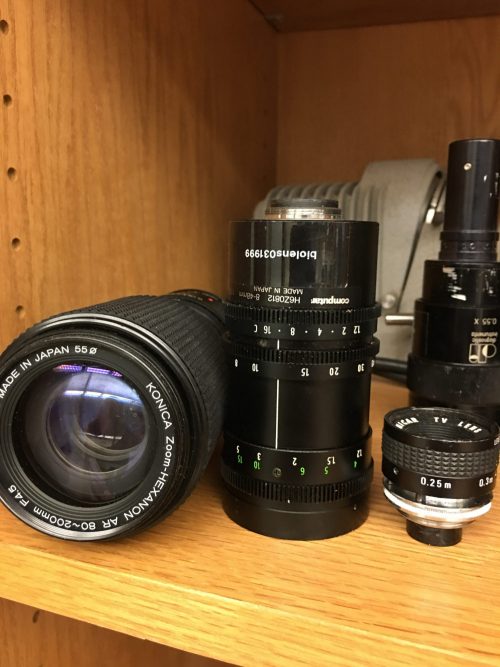 I have a couple of Zeiss lamp housings and this tube for a fluorescence microscope. Someone was doing some nifty stuff in the 1970s, I suspect. There are also a couple of massive illuminator bases with interesting clamps — part of an optical bench setup? 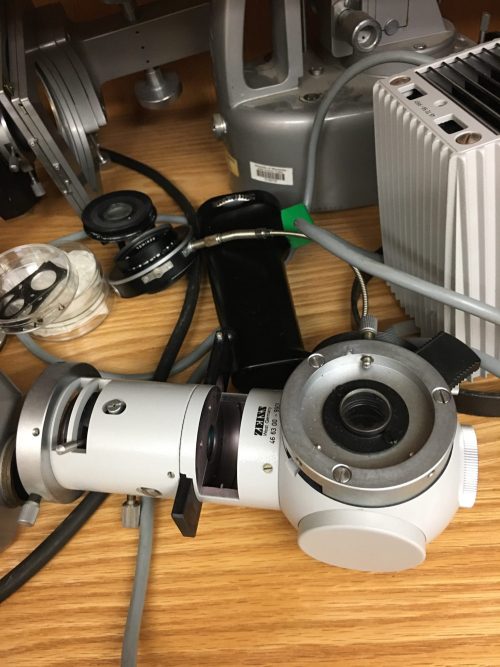 These were some other curiosities very neatly packaged in solid boxes with faded velvet padding: something called an optibeam, a name I associate with antennas, but this has a couple of lenses, so I have no idea what it’s for. There’s also a massive syringe of metal and glass, very impressive, I might have to use it to terrify the grandchildren. 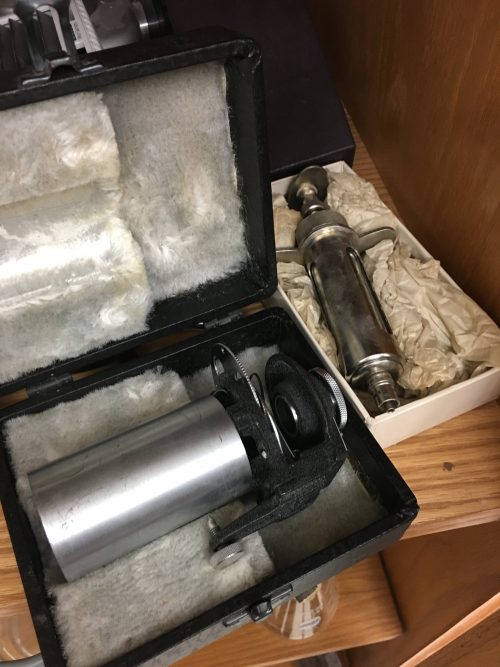 Not shown: I also have some mystery boxes of my own, with DECtape reels and Zip drives, which were all the rage in the 1990s. They seem quaint now — 100mb on a clunky plastic drive when I’m carrying around a terabyte in my pocket, on little thumbnail sized chips? Nah, they’re about as obsolete as all the junk on my shelf.

If you see something in those photos that get you excited, though, I can probably make arrangements with the university bureaucracy to ship them out. Otherwise, I predict that my successor someday will just sweep them all into a box and send them off to a landfill.