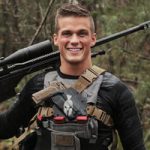 At the rate he’s going, Madison Cawthorn will be president one day.

Madison Cawthorn’s political origin story is that of an innocent Christian boy transformed through tragedy into a fierce freedom fighter. This tale begins with Cawthorn as a popular home-schooled teenager. He played football in a faith-based league, worked at Chick-fil-A, and was destined for a long and rewarding military career. Tragically, his path to the U.S. Naval Academy was derailed by a brutal car crash. Cawthorn, then just nineteen, was “declared dead on the scene.” But then a miracle happened. He kept the faith and fought his way back to a fulfilling life. In short order, he became an inspirational speaker, self-proclaimed CEO of a real estate investment company, and Paralympic athlete.

Cawthorn’s quasi-biblical biography captured the hearts of many in North Carolina’s 11th district, who last year elected him one of the youngest Congressmen in American history. While most political careers are assisted by mythmaking, Cawthorn’s self-spun narrative is particularly fictitious. In truth, he’s a college dropout, credibly accused sexual predator, and fan of the Third Reich who had no path to the Paralympics and was rejected by the Naval Academy. Contrary to Cawthorn’s past statements, he was not declared dead at his car’s crash site, and his real estate “business” appears to have only purchased a single foreclosed lot.

But what Cawthorn lacks in integrity he makes up for in resiliency. The determination and durability he demonstrated throughout his post-crash recovery—plus his natural born charisma—served him well during his Congressional bid. Cawthorn used these skills to convince many low-information voters that he was a soldier of some sort, then leveraged the credibility conferred by this false perception to cast his Democratic opponent, a retired Air Force Colonel named Moe Davis, as a “dishonorable” ally of terrorists. This warped reality led to a bizarre Election Day moment in which a voter essentially recognized Cawthorn as a decorated war hero. “Hey,” the voter began, “thanks for, uh, doing your service—.” Before he could finish, Cawthorn interjected: “It’s an honor to get to fight for America,” he said.

The article also points out something important: while Cawthorn is the most extravagantly dishonest of the Republican valor-thieves, Democrats do it too, unconvincingly rubbing themselves up against the “glamour” of big-money defense contractors and citizen enthusiasm for bigger, better, nastier weapons. That’s a mistake.

Democrats would do best to frame war as what it is: a deeply damaging experience for American service members, their families, and the world. In their failure to do so, the left has not only perpetuated conflict but also failed to define peace. The Pentagon has stepped into this vacuum and convinced the American people—a majority of whom want a smaller military footprint abroad—that peace is armed, dangerous, and MAD. Those who describe it otherwise, or call for the peacekeepers to put down their guns, are deemed weak-willed and anti-American.

Unwilling to challenge this consensus, Democrats continue to concoct war stories or cozy up to the military establishment in hopes of insulating themselves from criticism. Take Bernie Sanders’s support of the F-35 fighter jet being based in his hometown of Burlington, a highly controversial position that a political scientist once half-jokingly suggested to me was directed “almost at the point of a gun.”

Dulce et decorum est and all that. They really need to read beyond the title.

“…your fine ointment, brand new and expensive Could have been saved for the poor…” » « Didn’t we already know this?