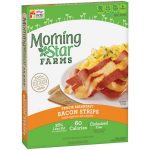 We’re going to be doing a bit of traveling today, so I thought I’d start us off with a traditional hearty breakfast. Bacon and eggs, that’s the ticket! We’re ovo-lacto pescatarians, vegetarian easy mode, so the eggs are fine, but bacon is forbidden. Fortunately, we had picked up some Morning Star Farms Veggie Bacon Strips, so I thought I’d try those.

These are perfectly rectangular, thin, flat sheets of something marbled with pink and white. A serving is 4.5 grams of fat, 2 grams of protein, and 1 gram of carbohydrate. You cook them in a frying pan, as if it were real bacon, and they sit there and get crispier, flatly. There’s none of the shrinking you get with real bacon, so after they’re heated through, you’ve still got an array of pink and white flawless rectangles.

Then you bite into one. They’re flavorless! They have a uniform texture which is nothing like bacon, lacking any fat. It’s exactly like thin strips of cardboard.

It’s my own damn fault for buying something that pretends to be meat-like. There’s nothing wrong with vegetarian food, and in fact it’s really tasty and flavorful and textured and complex, except when someone tries to make a pale imitation of something that relies on the complexity of animal tissue, and fails.

Even these Beyond/Impossible burgers have set themselves a low bar of emulating a meat that has a lot of the complexity ground out of it, and they’re not bad, but you can still tell the difference, and who knows how much effort has been put into the chemistry to get an approximation to ground meat flavor.

I should have just made a plateful of beans.