Sure, Trump was dumped, but the prominent Republicans, like Cruz and Rubio, are still defending him, and the majority really don’t want to impeach…and you’d think if they were really unhappy with the lyin’ demagogue, they’d want to make sure he can’t come back and run against a Republican candidate in 2024.

Worst of all, though, they are entirely complacent about have Marjorie Taylor Greene in their ranks. You know, the delusional woman who thinks mass shootings are all false flags to justify taking your guns away.

Here’s @mtgreenee talking about the Vegas mass shooting if you need some batshit crazy to start your day pic.twitter.com/0MzxFm131l

Also the nutcase who thinks the California wildfires were started by lasers from space. 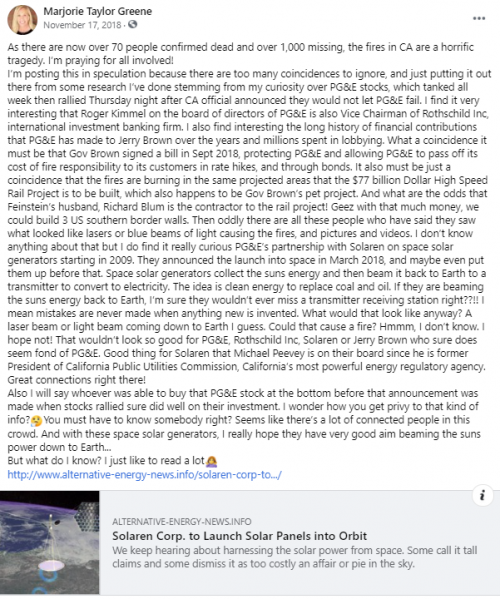 The fires were part of a conspiracy by Jewish bankers to clear the right of way for their rail project, don’t you know. She just likes to “read a lot.”

Of course, anti-semitism, racism, anti-Muslim bigotry, and white nationalism are her brand. There isn’t a conspiracy theory she hasn’t embraced. She’s a 9-11 truther. She thinks pizzagate was a real thing. She loves the right-wing militias. She thinks Hillary Clinton had her political enemies assassinated. She’s a dangerous loon who worships at the altar of QAnon and the Trump Cult. She thinks the Sandy Hook and Parkland shootings, in which children were murdered, was a staged event with “crisis actors”.

So what does the Republican leadership in the House do?

All of this has provoked House Minority Leader Kevin McCarthy (R-Calif.) to let it be known through a spokesman that he finds her comments “deeply disturbing” and that he “plans to have a conversation with the congresswoman about them.”

In the meantime, McCarthy scheduled a meeting at Mar-a-Lago with Trump. He apparently hopes to smooth over any hard feelings the former president may have about McCarthy’s mild blandishment that Trump “bears responsibility” for the mob that he fed with false claims about a stolen election and then incited to attack the Capitol on Jan. 6.

So it looks like a stern talking-to, followed by a make-up session, is the worst that can happen within the Republican family these days. And should anyone else try to exact a punishment, the party will protect its own, as all but five Senate Republicans proved this week, when they voted against even holding an impeachment trial of Trump.

They they appointed her to the Education Committee. I guess because she “reads a lot”.

The rot runs too deep. The Republican party must be dismantled and destroyed.

Not that the Democrats are flawless! Jonathan Chait, for example, thinks Alexandria Ocasio Cortez is the mirror image of Marjorie Taylor Greene, which is breathtakingly stupid. AOC hasn’t been preaching conspiracy theories and race hatred and the violent overthrow of the government; she’s working within the system to achieve progressive goals.

The leading Democratic mischief-maker is Alexandria Ocasio-Cortez, who advocates some left-wing views I consider simplistic and impractical and, in some cases, poll badly. The top example of a conservative mischief-maker, presented in perfect symmetry, is Marjorie Taylor Greene.

“Just a bit”! Because some of AOC’s goals “poll badly”! Fuck these neo-liberal scumbags, too.