Macrophiles ought to love spiders, and I know there are a lot of you out there, all frustrated because you can’t actually find a 50 foot tall woman. In fact, there are a whole lot of paraphilias that could be teased by spiders — from mild bondage fetishes to vores. If you’re a fan of Rule 34, you’ve got to start studying spiders to see how inadequate the human imagination is. 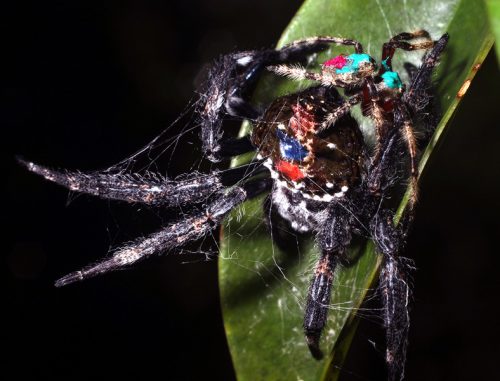 Darwin’s bark spider (Caerostris darwini) has many claims to fame: the largest webs, the strongest silk and several strategies for surviving sex. This is the only spider known to indulge in oral sex. Male spiders also go in for mate binding, a gentle form of bondage with silk that helps to reduce female aggression.

(Although, it seems to me, all spiders indulge in a kind of sex that is difficult to classify in human terms, and really, a proper Victorian gentleman would be seriously blushing at all the things his eponymous spider was up to.)

Sexual size dimorphism — where one sex is bigger than the other — is nothing too much out of the ordinary: Picture a massive male orangutan, or the bull elephant seal towering over his harem. And many insects and other terrestrial arthropods have large females, because a bigger body can produce more eggs.

Spiders, though, beat all comers: Females can be 3 to 10 times the size of males, and occasionally more. Most of these mismatched pairs are web-spinning spiders, notably orb weavers and widows. Female giant golden orb weavers (Nephila pilipes) are 10 times as long as males, for example, and a formidable 125 times heavier.

Welcome to the world of eSSD — extreme sexual size dimorphism.

You might be ready to read this gem of an article about spider sex now. Or you might want to run away screaming. Whatever floats your boat or tickles your pickle.

You might need some basic knowledge about how spiders do it. 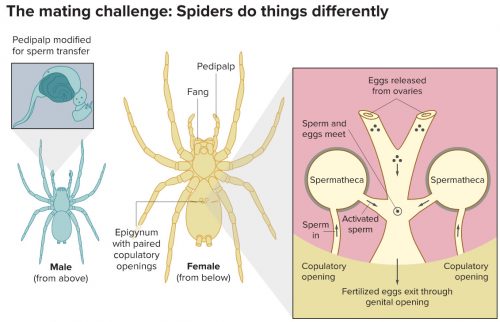 Spider sex is unique even leaving aside extreme size differences. Mature males squirt their sperm onto a tiny “sperm web,” then siphon up the sperm into appendages on the sides of the head for storage until mating. In females, these appendages — called pedipalps — are leg-like structures used to prod and probe prey, but in males the tips are transformed into sperm-delivery organs.

During copulation, the male inserts one palp into an opening in the female’s abdomen, and pumps in sperm. If he gets the chance, he’ll insert his second palp into the female’s other opening. There, his sperm — and that of any subsequent successful male — is stored in pouches called spermathecae until the female begins laying eggs. At that point, the sperm are activated, travel into the egg-laying canal and fertilize the eggs.

Then we can get into the kinky stuff. 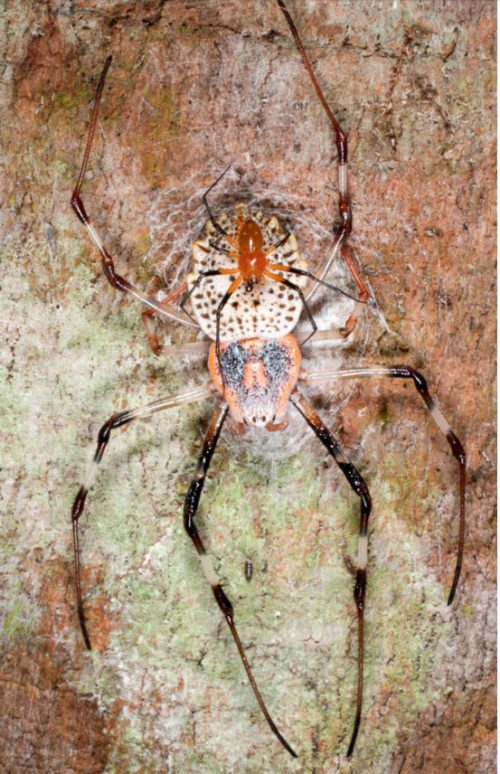 A small male coin spider, Herennia multipuncta, stands guard over his mate, ready to fend off further suitors. Males that castrate themselves during sex are better fighters than their intact rivals.

For example, males often congregate in a female’s web, where they fight to be first in line to try their luck. Successful males try to secure paternity by preventing rivals from adding their sperm to her store. They may try to plug the female’s copulatory openings by leaving behind the ends of their palps, or even entire palps. Even then, and assuming they survived mating, they often guard the female jealously, fighting to fend off other suitors. Asian hermit spiders that complete copulation without having to flee part way through and finish the job remotely still leave their palps behind when they’re done. A study from Kuntner’s lab showed that 87 percent of them abandon their palps this way, chewing them off if necessary. The team also showed that these “eunuch” males are more agile, superior fighters, better able to guard their mate.

In case you ever wondered how tinies and giants could mate satisfactorily, don’t worry, evolution finds a way.

For odd-sized mates, this process poses some tough challenges, but before you jump to conclusions, badly fitting sex organs isn’t one of them. “Evolution has taken care of things so the genitals of gigantic females are relatively small and those of small males are relatively large,” explains Slovenian spider specialist Matjaž Kuntner of the National Institute of Biology in Ljubljana. A bigger problem is surviving long enough to finish copulation and fertilize all or most of the female’s eggs.

Some spider males sacrifice more than their genitals. They positively encourage the female to eat them — because that buys them time to complete copulation. The male redback spider (Latrodectus hasselti) performs a suicidal somersault once he’s finished his first copulation, twisting his body around until the abdomen rests on the female’s fangs. As she begins to eat him rear-end first, he carries on copulating, inserting his second palp to deliver the remainder of his sperm.

Studying spiders does tend to make one feel like a pervert.