I keep telling everybody — spiders aren’t as scary/dangerous as you think. Now I have a paper that quantifies the risk of deadly spider venom. It’s low.

• A literature review was carried out to assess which arachnids can be classified as potentially dangerous.

• About 0.5% of all spider and 23% of all scorpion species were classified as potentially dangerous.

• Even envenomations from the most dangerous arachnids have a low percentage of serious or even fatal consequences.

• We conclude that the public threat from pet arachnid envenomations has been overrated. 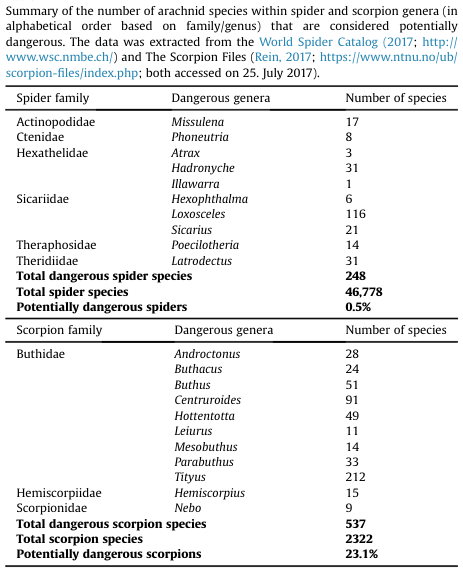 Note that the list errs strongly on the side of caution. It lists Eratigena, the hobo spider, but says in the text that “there is not a single verified bite that confirms E.agrestis or other members of this genus as dangerous to humans”. Latrodectus, black widow spiders, do have a real record — 23,000 incidents reported over 8 years — but less than half of those cases involved envenomation, and only about 1% exhibited severe effects, and there were 0 deaths. The Parasteatoda and Steatoda species I work on are only briefly mentioned and dismissed because their effects are much weaker than those of Latrodectus.

I’ve also never encountered any of the spiders they list, and I’ve been looking. I guess if I lived in Malaysia or Brazil I’d experience more of the thrill of danger, but here in Minnesota we’ve got a non-existent concern, and even in those tropical countries it’s a relatively minor worry.

(Of course I learned about this paper from Gwen Pearson. It’ll be useful if anyone at the university expresses concern about the hundreds of spiders currently in my lab.)

I wonder which of the fervent Republicans at the rally infected him? » « We can open the bars, but oh, no, we better delay the election