Bwahahaha! Bring the officer class together during a pandemic to have a bozo who doesn’t believe in the germ theory of disease to lecture at them! Trump has recalled the graduating class of West Point to stand before him in some kind of formation. Why? I don’t know. He just needs the ego boost, I guess.

It remains unclear how the graduation ceremony will actually look. The Naval Academy decided against holding an in-person ceremony at its campus in Annapolis, Md., and opted to hold a virtual event instead, according to The New York Times. The Air Force Academy in Colorado Springs, Colo. held a ceremony with cadets sitting eight feet apart from each other, with Vice President Mike Pence as its commencement speaker.

Three sources told The Times that West Point still hadn’t made its decision on how to conduct the ceremony, originally planned for late May, when Trump surprised officials there by saying he would speak in person.

I’m amused that they have no idea how best to do this. We’re struggling with it here at UMM, too, but we decided to do an entirely online ceremony, because we’d rather not risk the health of our students. That’s a trifle Trump does not worry about.

I would hope that all the graduates at that ceremony are seated a safe distance apart, and that they all wear masks, because you know no one in the Trump administration will wear them. It makes for great optics to see the disregard Trumpkins have for the safety of others. 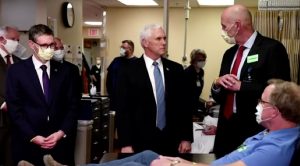 Best river monster ever! » « Capitalism is not the core philosophy of evolution