Back in 2014, a reconstruction of the full skeleton of Spinosaurus was proudly published. It had been assembled from multiple partial fossils, and was the best approximation of the organism possible.

It was an impressive beast, 15 meters long with that spectacular sail on its back.

At the time that Spinosaurus lived, what is now eastern Morocco was covered with sprawling lakes, rivers and deltas. As a top predator, the dinosaur would have had been among the rulers of an ecosystem teeming with huge crocodile-like animals, massive sawfish and coelacanths the size of cars.

Compared with other dinosaurs in its group — the two-legged, meat-eating creatures known as theropods — Spinosaurus has strikingly short rear legs. Ibrahim’s team interprets this as meaning that the dinosaur walked mainly on four legs. Its centre of gravity would have been relatively far forward, helping it to move smoothly while swimming.

John Hutchinson, a palaeontologist at the Royal Veterinary College of the University of London, is less convinced. He worries about the reliability of cobbling together different specimens to create a single picture of an animal. “We have to be careful about creating a chimera,” he says. “It’s really exciting speculation, but I’d like to see more-conclusive evidence.”

The caveat at the end was prescient. Some pieces were missing from the fossil record. Now that has been changed, and wow, it’s even more spectacular! The old tail wasn’t quite right — it had a broad paddle. 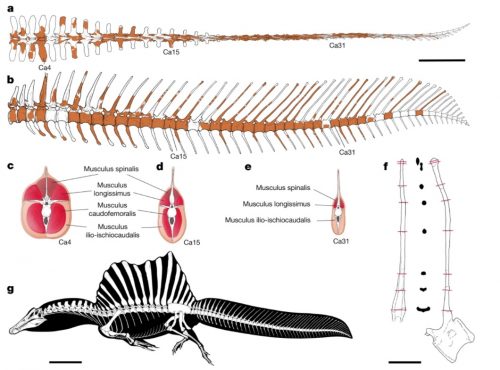 OK, this is now my favorite dinosaur.