Abe Drayton, who appeared in last Sunday’s hangout, has a fine article centered on Mexie’s discussion of the injustice of capitalism towards disabled people. You should watch it, but also read Abe’s commentary.

Capitalism relies on the lie that human nature is all about greed, competition, and aggression. That is not what drives civilization, it’s what constantly tries to dismantle it. Every advance we have made in human wellbeing has come from the mass of people working together against those obsessed with competition and power to create a world that’s better for everyone. Capitalism does not give a damn about you, but fortunately those obsessed with capitalism are wrong – it is not an inevitable result of human nature, it is a perversion of it. A better world is possible, and we can move in that direction the same way we always have – by expanding the “tribe”, by pooling our resources and efforts, by caring for each other, and by using our collective power to force change.

Lay people seized upon Darwin’s idea of natural selection to distort it in directions favorable to capitalism, and started a dreadful feedback loop that justified exploitation — “I’m rich, therefore I deserve to be rich by natural law, and you’re poor, so you don’t deserve what little you have” — and ballooned it into a rationalization for our current nightmare. It’s what allows creationists to caricature evolution as nothing but a history of death and suffering. 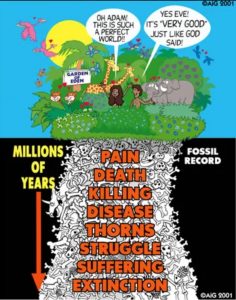 It’s more mainstream than that, too…the whole idea of “Darwin Awards” is terrible and unrepresentative, unless you also give the award to individuals who increase the success of others and themselves with generosity and cooperation. The human species did not succeed because they were the best at killing — they’ve always improved our common survival by working together and building communal social structures.

The Manchurian tangerine has a cunning plan to undermine the American military » « I’m sorry, I got sucked into a vortex last night