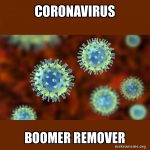 It goes without saying that it’s the conservatives, but let’s be more specific. Not so specific as your Aunt Madge who sends you suggestions to drink bleach on Facebook, but a source that aggregates all the nonsense. I think I could make a case that The Federalist is at least among the worst offenders.

That site right now is full of bullshit trying to downplay the coronavirus concerns. For instance, here is a poli sci student arguing, in a rambling incoherent mess of an article, Is Social Distancing Saving Lives Or Ruining Them?. He’s reluctant to give a straightforward answer, but you can tell where he’s leaning.

The current response is quickly driving the United States into a recession, which will result in a great deal of misery for tens of millions of people. Again, balancing lives against money sounds harsh, but everyone does so — and must do so — whether he is conscious of the fact or not. Not to mention, a recession also means higher poverty rates, which lead to higher mortality rates.

More is at stake than lives and money: namely freedom. Even for those of us who are by no means libertarian, the increasingly draconian measures put in place across the nation, especially in California, to isolate people and prevent them from moving at will are raising serious questions about whether Americans are in a dress rehearsal for tyranny.

OK, that guy is just an ass. But what about this rather surprising post from a medical doctor. He has a solution that he thinks wouldn’t hurt the economy so much — it’s always about “The Economy”, you know — a treatment that would solve everything: How Medical ‘Chickenpox Parties’ Could Turn The Tide Of The Wuhan Virus. Yeah, give everyone the disease right away, that’s the ticket! Well, not everyone. Let’s have Voluntary Infection parties in which young people who are most resistant go to some site and mingle and let everyone pick up the disease. He even suggests cruise ships as enticing locations to get people to participate in voluntarily getting a disease that might only kill one or two percent of them.

Hmm. How many doctors and hospital beds are available on your average cruise ship?

The idea would be to ramp up the numbers of immune people very quickly, maximizing the possibility of herd immunity. He hasn’t thought much about how we would cope with massive numbers of sick people all at once. Sick working people. Sick doctors. All intentionally confined to a few locations.

You know chicken pox parties were never a good idea, right? There’d always be some kids who’d die. I wouldn’t be one to claim that’s an acceptable price to pay, but apparently this one MD thinks it’s brilliant.

But I will say that his idea is novel, and for once it’s nice to see a proposal to infect and kill a significant number of young whippersnappers, rather than suggesting that my generation needs to die to protect the economy. It’s still an incredibly stupid idea, to which the only reasonable reply is…OK, boomer.

I was wrong about something. The MD who authored that article about voluntary infection is not an MD. He pretends to be one, but is actually a conservative businessman who is not licensed to practice in his state despite his claim.

“That would be misleading the public,” a startled member of the Oregon Medical Board staff told VICE. “In Oregon, that is a violation of the Medical Practices Act. That would have to be investigated.”

Par for the course for The Federalist.

There goes Ed Yong, being massively pessimistic » « Never ever follow the recommendations of ghouls