Below is a response to a question on Quora: Why does President Trump move and stand so strangely? I thought it was insightful, because I’ve also wondered why he persists in painting himself orange, why he has such weird candy floss hair, why he constantly makes those strange gestures as he talks. Hasn’t anyone told him that they make him look strange and freakish? I suppose it’s good that one doesn’t feel constrained by fashion, and is bold about facing the world as he wants, but he always seems to act as if he thinks he’s a beautiful, brilliant golden god. This explanation seems more likely.

Trump has some odd ideas about how he appears to the world, obviously. He dyes his skin a strange color, and does some very strange things with his hair. He knows that this makes him a joke in the eyes of the world, which is not the intended effect – he’s vain, thin-skinned and very publicity-conscious. So there’s some weird processing that happens in his head that makes him say “The fake news makes fun of me, but it’s because they’re jealous. Sad! Women want to grab my pussy!”

It’s a kind of dysmorphia, like Michael Jackson turning a perfectly good face into a Phantom-of-the-Opera physiognomic tragedy, while thinking he was getting closer and closer to perfection. Or like the body image of an anorexic, where everyone is saying with increasing urgency that they’re wasting away, and yet they see themselves as not thin enough.

Trump has an inner vision of himself that is exaggerated beyond any version of ‘normal’ – you can extend this to his psychological self-assessment – but in his mind he’s beautiful and sexy and he doesn’t have an alternate self-image. His orange skin and strange hair-art are cleverly covering over his weaknesses, he thinks.

In some degree, this isn’t so uncommon. Men with beards often brush off helpful comments like “Beards are so aging …” because they see themselves as mature and wise, perhaps, and their weak chin and vague jawline as something they feel needs to be hidden from the world. Women with strange Flashdance haircuts originating in the wayback time see their look through the same eyes as when they were 16. They know it isn’t contemporary, but it’s kind of locked in – they ‘look like themselves’ to themselves. When you look at that self-inflicted mess that John Bolton has for a face, you wonder what he thinks he’s playing at, but he’s like Trump – he looks in the mirror and he sees ‘intelligence’, perhaps. Some sort of a cunning disguise for the underlying ordinariness.

Trump takes a set of fashion faux-pas and private beliefs – that orange-dyed skin looks healthier, that his crazy greasy hair is youthful, that long ties make him appear taller and narrower, that suits cut too big hide his bulk and make him appear more impressive – and makes them into his superhero costume, his disguise.

Then he has ritualized ways of moving and posing that are part of the same scheme. You rarely see photos of Trump looking natural. He’s always posing, creating some look that in his own mind is as marvelous as his hairdo. When he sits he likes to get his knees apart to show off everything “down there”, then put his fingertips together between his legs in a sort of steeple, spire pointed down. He was probably told by someone a long time ago that this was an alpha position that symbolically shows that you’ve got a great big penis. When he talks he does that thumb-to-4th-finger thing, a variant of the A-ok sign. It means nothing, he just does it at random, but in his mind it’s an impressive gesture that indicates precision, perhaps, like a chef emphasizing just a soupçon. When he reads a teleprompter he slumps unhappily from one side to the other, tipping his head first this way, then that, like an animatronic figure in a Disney theme-ride. That seems to him to make it more casual, less stiff. When he stands he tilts forward, probably so that his belly isn’t the point of furthest advance, but perhaps for some other semi-magical reason.

It’s all of a piece – his weird look, his weird postures and movements, and his weird exaggerated sense of himself.

PS: I should add, to calm the angry legions of bearded gentlemen who feel they were materially harmed by what I said about beards, that it wasn’t about beards per se but about feedback. If someone says that beards are aging, they’re saying they wish you’d shave. That’s just them, and just you. Maybe all the really sexy ones think you look fantastico!! Who knows??

I picked beards as an example of anything-about-the-way-you-look because I have a beard. Instead of making mock of others I thought “What would Jesus do?” and Jesus would plainly have used a beard, long hair, and a crown of thorns as examples of things that critics might fuss about.

I can sympathize with that. I have my own self-image, and it shocks me every time I look in a mirror or hear my voice — only unlike Trump, rather than a golden god, I see myself as a schlumpy, homely, shambling blob, and the problem with mirrors is that they so accurately confirm my self-portrait.

Also, about beards…their presence or absence is just a thing. I keep mine because I’ve had it for forty years, and shaving it off makes me look so different that it adds an uncanny valley sensation to the expected schlubbiness. Our self-image is strongly built on prior experience and familiarity, you know. Trump likewise is accustomed to looking in the mirror and seeing an orange glow with pale rings around the eyes, capped with a wisp of pink floss. Anything else would seem alien to him. 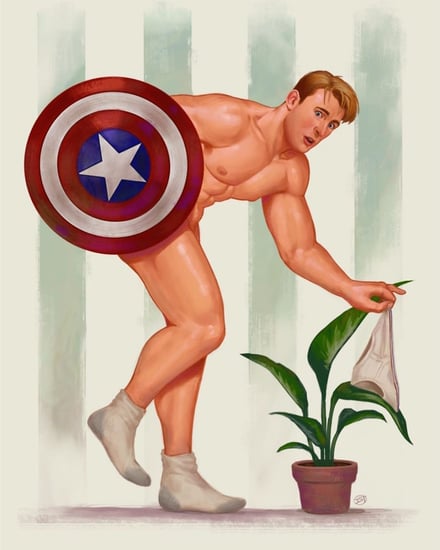 Yeah, sure, that’s what all Americans think they look like. Right.

Check out our updated roster on FtB! » « Maybe Dr Seuss was right