Read these old pre-WWII newspaper articles, in which a very nice American Quaker is arguing (to a conference of rabbis, no less) that if Jews throughout the world try to instill into the minds of Hitler and his supporters recognition of the ideals for which the race stands, and if Jews appeal to the German sense of justice and the German national conscience, I am sure the problem will be solved more effectively and earlier than otherwise. 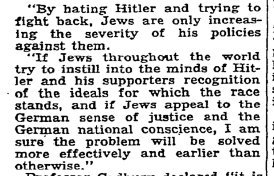 It’s weird. The guy also repudiates the notion of boycotts, because that’s economic violence. Buy from fascists, because capitalism is a hell of a drug. There’s even an article from another person arguing that Hitler’s supporters aren’t racist, they’re just economically anxious.

We’ve been through all of this in the 1930s. Unthinking pacifism didn’t work then, it’s not going to work now.

Another billionaire leaps into the presidential race » « Support your local antifa