Something about this title, “Evolutionary discovery to rewrite textbooks”, put me on edge. It’s a common trope to announce that your specific discovery is going to revolutionize everything, therefore you deserve more attention and glory and grant money. (Creationists seem not to understand this dynamic, though — they think scientists stick with the safe, and they think wrong, theory for all the money, when everyone knows a good, robust insight that changes minds is where the glory lies).

It’s in phys.org, though, which is generally a garbage fire of badly butchered summaries of papers, so that fact alone primes me to think the summary writer didn’t really understand the paper.

But then, it quotes the study author.

“This technology has been used only for the last few years, but it’s helped us finally address an age-old question, discovering something completely contrary to what anyone had ever proposed.”

“We’re taking a core theory of evolutionary biology and turning it on its head,” she said.

“Now we have an opportunity to re-imagine the steps that gave rise to the first animals, the underlying rules that turned single cells into multicellular animal life.”

Professor Degnan said he hoped the revelation would help us understand our own condition and our understanding of our own stem cells and cancer.

Aaaargh, no. They’re claiming that multicellular animals did not evolve from a single-celled ancestor resembling a choanoflagellate, a small protist with a single, prominent flagellar “propellor”, which many scientists consider to resemble one of the cells of sponges, called choanocytes. The idea is that the first multicellular animal would have arisen from colonies of choanoflagellates ganged together, with specialization of other cell types evolving later.

It’s fine and interesting that these investigators are proposing an alternative model, but this is not a “core theory of evolutionary biology”. It’s a likely hypothesis for the origin of a lineage of organisms we selfishly consider important, because it includes us, but it doesn’t actually revolutionize any part of the theory of evolution. Way too many scientists fail to grasp that there are the theories of evolution, that explain general mechanisms of the process, and that there are a multitude of facts of evolution, which are the instances in history that led to the specific distribution of evolutionary outcomes.

It’s like how there are physics theories that explain general phenomena: your car operates on all kinds of rules about force and acceleration and combustion. If you one day discover a shortcut on your commute to work, it may be an important personal discovery, but you don’t get to crow triumphantly about turning a core theory of automotive engineering and mechanics on its head.

But then, this is phys.org…I guess I’d better read the original paper.

It really is an interesting paper. It looks at the transcriptome of different cell types in sponges and compares them to the transcriptome of a choanoflagellate, and is basically addressing the reliability of a conclusion drawn from an observed phenotype, versus a conclusion drawn from patterns of gene expression. It’s going to argue that gene expression ought to be more fundamental, and I can sort of agree (while also seeing some problems of interpretation), but it then leaps to evolutionary conclusions from cell types, which I don’t find persuasive at all.

The question then is, what genes are being expressed in these three cell types? And the answer is, well, lots of genes, and many of them are being differentially expressed — that is, there are genes unique to each cell type that reflect their general role.

We find that archaeocytes significantly upregulate genes involved in the control of cell proliferation, transcription and translation, consistent with their function as pluripotent stem cells. By contrast, choanocyte and pinacocyte transcriptomes are enriched for suites of genes that are involved in cell adhesion, signalling and polarity, consistent with their role as epithelial cells.

Now though, they raise an evolutionary question. They identify all these genes, and then ask which are common to single celled eukaryotes, which are common to multicellular animals, and which are unique to sponges. This gives a rough estimate of the evolutionary age of these genes; the first category is the oldest, found in pre-metazoan organisms, the second category may have arisen at the approximate time of origin of the metazoan lineage, and the third category would have appeared later as the sponge lineage specialized. They determined the relative contributions of these three categories to the patterns of gene expression in the three cell types.

Does this diagram help interpret that? 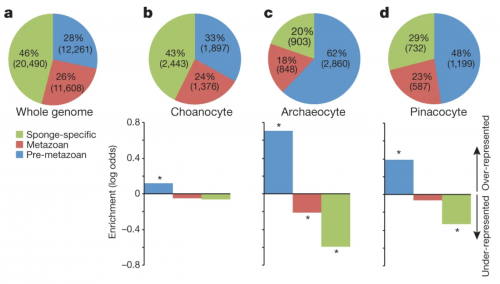 OK, maybe not. Shorter summary: archaeocytes express lots of old genes, which makes sense, given we already had it explained that they’re enriched for genes involved in control of cell proliferation, transcription and translation, which are also ancient, primitive functions. Pinacocytes are also doing fairly basic things, and like the archaeocytes, are switching on basic essential genes. The choanocytes, though, are exceptional, and are turning on lots of sponge-specific genes that evolved after sponges diverged from other metazoans. The conclusion: choanocytes are switching on derived spongey genes that evolved for a spongey lifestyle, while archaeocytes are more generic, switching on a universal toolkit for adaptable stem cells, which have to be able to change their roles to become any of the three cell types.

They also make the point that the choanoflagellate gene expression pattern is most similar to that of the archaeocytes. From these observations, they argue that the ancestral metazoan more resembled a stem cell, like an archaeocyte, than a choanoflagellate.

…we posit that the ancestral metazoan cell type had the capacity to exist in and transition between multiple cell states in a manner similar to modern transdifferentiating and stem cells. Recent analyses of unicellular holozoan genomes support this proposition, with some of the genomic foundations of pluripotency being established deep in a unicellular past. Genomic innovations unique to metazoans—including the origin and expansion of key signalling pathway and transcription factor families, and regulatory DNA and RNA classes—may have conferred the ability of this ancestral pluripotent cell to evolve a regulatory system whereby it could co-exist in multiple states of differentiation, giving rise to the first multicellular animal.

And that’s where they lose me. I don’t buy their interpretation.

First, organisms do not evolve by descent from cell types. The whole genome is passed down. That choanocytes express a certain subset of genes is irrelevant — they carry the whole suite of genes, as do the pinacocytes and archaeocytes. You wouldn’t do a gene expression profile of human brain cells and compare it to the profile for mesenchymal cells, and then argue that brain cells are weird and unique, therefore we didn’t evolve from brain cells. Of course we didn’t! Your assumptions make no sense.

Second, what they found was that choanoflagellates exhibit a broader, more general pattern of gene expression than sponge choanocytes. This makes sense. Sponges are truly multicellular, with specialized subsets of cells that carry out specific roles, while choanoflagellates are unicellular, where each cell has to be a jack-of-all-trades. Yes, a choanoflagellate is going to have to use all of its genes, while individual cells in the sponge have the luxury of focusing on a smaller set of jobs. Choanocytes are specialized, they’re going to have a different expression profile than a generalist cell.

Third, choanoflagellates have an expression profile similar to an archaeocyte…but this is not in contradiction to their phenotype of having a flagellar collar. The metazoan ancestor could still have been a choanocyte, and nothing in this evidence contradicts that possibility!

All they’re really saying when you get right down to it is that metazoan ancestor had to have the capacity to generate diverse cell types later in its evolution, which is kind of obvious. They’re also arguing that the ancestral metazoan could not have been as locked in and limited in its repertoire of functions as a choanocyte in an extant sponge, which, again, is a given. What is not obvious is that the ancestor had to have been archaeocyte-like in form and function.

I also get the impression that the authors have been soaking in the transcriptomics literature and practice to the extent that they’ve lost sight of the bigger picture. They’d only have an argument if descendant forms were derived from the RNA of their ancestors…which actually would revolutionize the theory of evolution! Fortunately, they are not making that claim at all.

Finally famous — we’re in the Stevens County Times! » « I don’t know how I did it, but I know I deserve all the credit