Of course he went there, because Limbaugh is a malignant fusion of a puckered asshole with a gasbag filled with toxic flatulence. He rushed to claim that a terrorist attack with 49 dead is a “false flag”.

Another thing that happens here when these events happen, you have all kinds of speculation that erupts. And there is an ongoing theory — Mr. Snerdley, correct me if I’m wrong about this. There’s an ongoing theory that the shooter himself may in fact be a leftist who writes the manifesto and then goes out and performs the deed purposely to smear his political enemies, knowing he’s going to get shot in the process. You know you just can’t — you can’t immediately discount this. The left is this insane, they are this crazy. And then if that’s exactly what the guy is trying to do then he’s hit a home run, because right there on Fox News: “Shooter is an admitted white nationalist who hates immigrants.”

He even precedes it with the mention of all kinds of speculation, and then goes ahead to excrete that nonsense. The left is this insane, crazy, but at least we aren’t trying to bury other peoples’ pain in an avalanche of shitty “theorizing”. Here’s an alternative theory that is much more plausible. 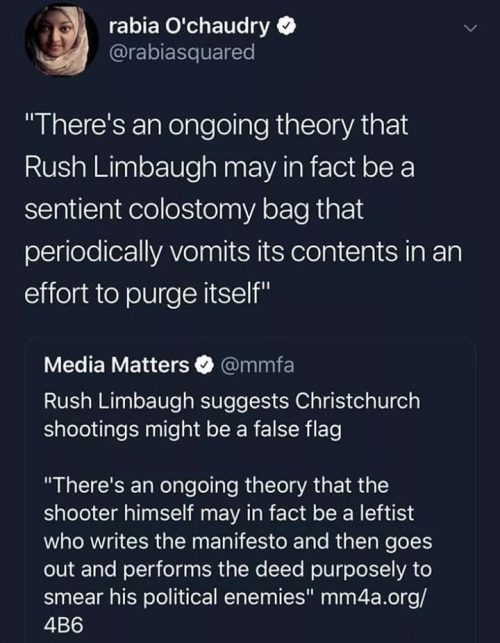 People still listen to that noxious pill-swilling, sex-trafficking scumbag? What a world.