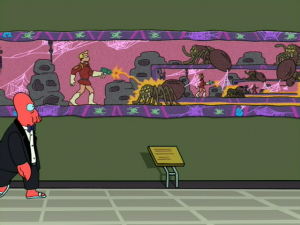 Oh, the nerdity of it all. I just read about a discussion of how spider-aliens would survive in space. This is my kind of thought-experiment!

In my stellar empire, the sapient life of the home world are arachnids. Due to an oxygen-heavy world with certain evolutionary characteristics, spider-like beings developed intelligence and formed society, leading them (eventually) to start looking toward the stars. This led to the development of space suits for the pioneering arachnid astronauts.

What would these look like? How would space suits be differently designed to support arachnids?

Let us posit that the arachnids are roughly 4 feet from “spinneret” to fangs. Their legs are large enough to support them (I don’t know what that is). They’re light compared to us (maybe 25 pounds at the heaviest – bear with me on the whole square cube law deal). They have roughly equivalent technology levels to ourselves at the time of our first missions into the stars.

Just by coincidence, I’ve been reading up on spider physiology recently, so this piqued my interest. Most of the answers in that thread are pretty good.

I’d first have to state a caveat: multi-legged alien beings evolving on a distant planet will not be spiders. It’s unfair to compare limitations and abilities that they have to those of terrestrial spiders — they aren’t related! Just blowing up an Earth spider to 1.2 meters long is not a valid comparison. But OK, let’s play a game and imagine an alien “spider” that evolved from an ancestor living in a similar niche to that of our spiders. Traits that are probably relevant are:

It’s a fun exercise, but if we ever find such a creature I suspect it will have less similarity to our spiders than we humans do to an acorn worm, so much of the speculation is moot.

Real spiders are more interesting. As I said, I’ve been reading up on spider physiology, so here’s a diagram of the main elements of the spider circulatory system (“h” marks the heart, on the dorsal side of the abdomen.)

That’s the cartoon version — here’s a resin cast of the full circulatory network of the opisthosoma of Cupiennius. It blows me away that they were able to do this — Cupiennius is fairly large as spiders go, but still pretty tiny. 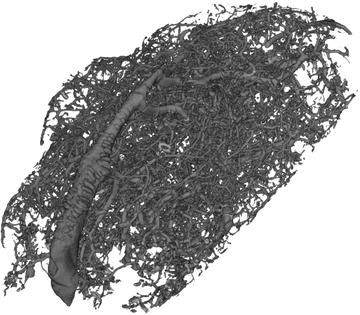 Even more impressively, people have measured the blood pressure in the spider circulatory system — no, not with an itty-bitty sphygmomanometer. I suspect they used optical methods to visualize pressure changes, but that’s a paper I haven’t tracked down yet.

Systole and diastole are still valid concepts in a spider. In case you were interested, their hearts beat at a rate of 9 to 125 beats per minute. That’s quite a range, but as I mentioned above, one of the challenges is a highly variable metabolic rate.

Ultimately, though, if you’re going to design an SF “spider”-like alien, you shouldn’t be constrained by the form and physiology of terrestrial spiders. A homeothermic creature with an endoskeleton, but with a bunch of limbs and eyes and a sclerotized cuticle, and maybe some funky spiky complex mouthparts, is going to look enough like a spider to Zapp Brannigan that that’s what he’s going to call it anyway.

Oh no! The libs castrated the cookies! » « The panopticon is looking more appealing