I got a strange email the other day.

Dear Dr Myers, I note that you are trolling our work Please find attached a copy of our SPIE paper which we gave in San Diego. I would welcome the opportunity to give a talk at you Institution so that you, with all your infinite wisdom, could shoot me down in flames and make a fool of me. However, I doubt that you have the balls ! Professor Milton Wainwright

“Trolling” their work? And who the heck is Milton Wainwright? And then I looked at the paper and realized…

Earlier this week, someone had told me that there was another loony “organisms from space” paper touted as proof that British scientists had discovered alien life published in that joke journal, the Journal of Cosmology by this guy Wainwright, and I admit it, I took a quick look at his goofy blog. But that’s it! All I did was read it! I didn’t comment or write about it here!

For a moment I had this terrible thought that maybe the crackpots have finally figured out how to read our minds.

But then I realized that these guys get so little attention paid to them that they probably carefully scrutinize their tiny little referer logs, and they noticed that someone from Morris, Minnesota stopped by, and obviously, since I’m the sole inhabitant of this eerily empty ghost town on the prairie, it must have been me.

So now merely reading their work is trolling.

Well, now I guess I’m obligated to follow through. I had read their paper and decided it was more of the same ol’, same ol’ and hadn’t said anything then, but I’m willing to summarize it.

The data collection is fine. They’re lofting balloons into the stratosphere, and at a designated altitude, are opening a trap that allows dust, debris, small organisms, and so forth to settle and adhere to EM stubs. Then the trap is closed, the balloon descends, and they put the stubs on the electron microscope and see what is floating around in the atmosphere.

So far, so good. The problem lies in the interpretation. They’re then sorting the material observed into known vs. unknown, where “known” is clearly material from earth, and “unknown” is immediately categorized as Possible Signs of Extraterrestrial Life. The logic doesn’t work. It makes no sense. You’re looking at low density airborne particles in the atmosphere of a planet; it’s not as if we’ve come even close to categorizing all the particles of terrestrial origin, so you can’t play this game of assigning subsets to some other source outside our world.

The authors also have a bad case of apophenia. Almost every bit of unrecognizable garbage they spot is called “life”. Here is one of their examples.

A, Sheet-like inorganic material recovered from the stratosphere which is clearly not biological; and B, a clump of stratospheric cosmic dust which includes coccoid and rod shaped particles which may, or may not, be bacteria.

So the sheet-like stuff to the left is not biological (how they know that, I don’t know and they don’t tell us — I think it’s “it doesn’t look like it to my untrained eye”), while the amorphous blob to the right may or may not be biological. In other words, the information content in this image is precisely zero. (By the way, that mess on the right doesn’t look at all bacterial to me.)

In other cases they flat out claim that the blob they see is biological. 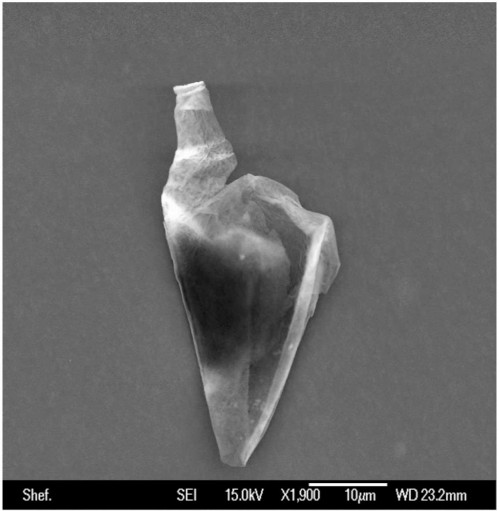 An unknown biological entity isolated from the stratosphere

Unequivocally biological, no less. How they know, I again don’t know. It seems to be that when they stare at it and do a little subjective pattern matching, they call something a “neck” and something else a “body” — that is, they slap labels on things that conform to their beliefs about the morphology of organisms.

The structure shown in Fig.3 however is unequivocally biological. Here we see a complex organism which has a segmented neck attached to a flask-shaped body which is ridged and has collapsed under the vacuum of the stratosphere or produced during E/M analysis. The top of the neck is fringed with what could be cilia or a fringe which formed the point of attachment of the neck to another biological entity. The complexity of this particle excludes the possibility that is of non-biological in origin.

Complexity does not exclude a non-biological source. Also, just saying that things have names similar to the names we’d give a life form does not support the claim that it is anything other than a subjective interpretation of some debris.

They have another example that demonstrates my point. 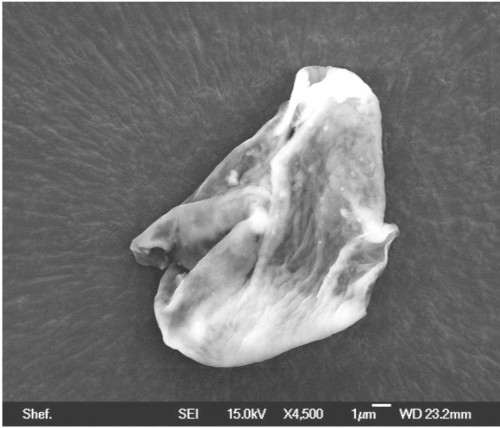 A collapsed balloon-like biological entity sampled from the stratosphere. Note the “proboscis” to the left, with nose-like openings and the “sphincter” present at the top of the organism

The structure shown in Fig.4 is also clearly biological in nature; here we see a somewhat phallic balloon-like structure which has presumably collapsed under low pressure. A “proboscis” is seen emerging from the left of the main cell which has two, nostril-like openings. At the top of the collapsed “balloon” is a sphincter-like opening. Again, this entity is clearly biological in nature, and is not an inorganic artefact. Although it is clearly not a bacterium it could well be an alga or a protozoan of some kind. The organisms shown in Figs. 3 and 4 are presumably clear enough for experts in the relevant branches of taxonomy to provide some kind of identification.

Why would an alga or a protist have a proboscis with nostrils? Do they have multiple samples that exhibit a similar shape? Isn’t it more likely to be a random scrap of material, rather than the patterned shape of an organism?

Oh, wait. They missed something: look at that wrinkle at the bottom right of the object. It looks like…a pointy ear. And then there’s the nose, alright, and a robust jaw beneath it. By golly, it’s the tiny decapitated head of a gnome that was less than a tenth of a millimeter tall in life! And its forehead has been bashed in, no doubt in a great battle between microcosmic fairy tribes waged by thrip-mounted cavalry in the skies!

I think that’s a more plausible explanation than the authors’ similarly evidence-free guess that unidentified particles are signs of extraplanetary life.

Also, I thought Journal of Cosmology was defunct — it was up for sale, complete with crude slymepit-style parting shots at me. I guess it’s still dribbling on, providing a forum for the worst and dumbest kinds of pseudoscience.

By the way, Rawn Joseph, former(?) owner of the JoC, appears to have had a rather nasty falling out with Chandra Wickramasinghe, who he accuses of theft and plagiarism.

“Mindy” sounds nothing like “Xena” » « Smart talk about school sports