Dang. I’m not a botanist, and I’m honestly a bit weak on all that plant stuff, but I have to give some background on plant anatomy and photosynthesis to give some context for this cool story. Fortunately I was explaining all this to students in cell biology last week, so I can manage!

First, you all know that plants make sugar from carbon dioxide and sunlight. They use photosynthesis in a set of light reactions to produce energy (in the form of reducing compounds and ATP) that are passed on to a pathway called the Calvin cycle, which fixes CO2 into carbon compounds. It does that by adding the carbon in CO2 to a 5-carbon sugar called ribulose bisphosphate, producing a 6-carbon molecule that is immediately split into two 3-carbon molecules, called 3-phosphoglycerate or 3PG. The enzyme that carries out this reaction is called rubisco, and it’s not particularly efficient. In fact, it’s kind of terrible — it works poorly in a low CO2 environment (like modern Earth!), and plants can lose 25% of their energy to a reaction with O2, rather than CO2. The Calvin cycle is thoroughly intertwined with all kinds of reactions in plant biochemistry, though, so it’s pretty much indispensible. There isn’t an alternative, more efficient reaction that can substitute for it.

Evolution has been creating workarounds, though! Some plants have evolved a kind of supercharger for CO2 — they use an alternative enzyme, PEP carboxylase, to fix CO2, adding the carbon to a 3-carbon intermediate, phosphoenol pyruvate, to produce a 4-carbon molecule, oxaloacetate, which is then passed along to other cells where the carbon is cleaved off to form CO2 again, which sounds kind of pointless, I know…except that what it does is create a CO2-rich environment in the destination cells, so rubisco can run much more efficiently. See? A turbocharger for plant sugar synthesis.

These plants also have a specific anatomical organization, called the Kranz (German for wreath) pattern. There is an outer ring of mesophyll cells that specialize in fixing carbon with PEP carboxylase, and they transport the 4-carbon intermediate into an inner ring of cells, the bundle sheath cells, where rubisco re-fixes the CO2 into a 3-carbon intermediate. 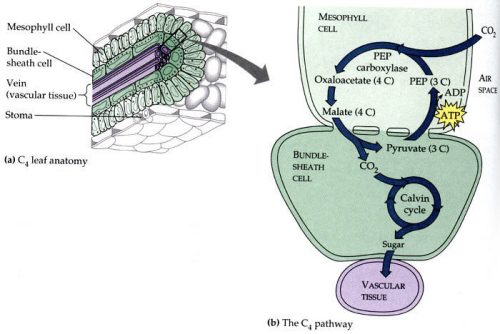 Not all plants have this ability. The plants that don’t, that rely entirely on just the bare bones Calvin cycle that produces a 3-carbon intermediate, are called C3 plants. Familiar C3 plants are wheat, rice, and barley. The plants that do have a supercharger and produce a 4-carbon intermediate are called C4 plants. Corn and sugar cane are well-known C4 crops. C4 is better at coping with environments poor in CO2, like everywhere. What if we could transplant that C4 metabolism in crop plants that lack it, like wheat and rice? We’d expect significant improvements in growth.

You might argue against that by noting that the Kranz anatomy is rather specific and detailed…but it turns out that Kranz anatomy is not essential for terrestrial C4 plant photosynthesis. Some plants have the C4 enzymes without the mesophyll/bundle sheath cell arrangement, and they benefit. It may also be feasible to engineer a proto-Kranz arrangement into C3 plants as a first step, and this is being done:

The C4 photosynthetic pathway accounts for ∼25% of primary productivity on the planet despite being used by only 3% of species. Because C4 plants are higher yielding than C3 plants, efforts are underway to introduce the C4 pathway into the C3 crop rice. This is an ambitious endeavor; however, the C4 pathway evolved from C3 on multiple independent occasions over the last 30 million years, and steps along the trajectory are evident in extant species. One approach toward engineering C4 rice is to recapitulate this trajectory, one of the first steps of which was a change in leaf anatomy. The transition from C3 to so-called “proto-Kranz” anatomy requires an increase in organelle volume in sheath cells surrounding leaf veins. Here we induced chloroplast and mitochondrial development in rice vascular sheath cells through constitutive expression of maize GOLDEN2-LIKE genes. Increased organelle volume was accompanied by the accumulation of photosynthetic enzymes and by increased intercellular connections. This suite of traits reflects that seen in “proto-Kranz” species, and, as such, a key step toward engineering C4 rice has been achieved.

Key things to note: they are recapitulating known evolutionary pathways to more rapidly ‘evolve’ a C3 plant to a C4 state. They’ve generated a line of rice with the first step in this pathway, the proto-Kranz condition. This does not, however, mean that they’ve produced a rice plant with higher yields — they have yet to introduce all the other steps in C4 metabolism. They do state that this transition, while not increasing efficiency yet, has also not reduced the yield of the rice plant, which suggests that the initial steps in the evolution of this pathway did not involve a cost to the plant, and also that the morphological changes, which I would have naively thought would be the biggest obstacle, may have been relatively trivial.

The complexity of the anatomical and biochemical changes needed for the C3-to-C4 transition appears seemingly incongruent with the multiple independent origins of the pathway. However, the results presented here suggest that one of the earliest steps in C4 evolution, the transition from C3 to protoKranz, could have resulted from modified activity of a single gene.

WTF, Minneapolis? » « I would be convinced that I am a vampire