His name was Henry Towne. He was a second cousin on my father’s side; he was always cheerful and laughing, and was the life of every party. He was also a fanatical John Bircher, and his house always had signs outside: “US OUT OF THE UN!”, and various such slogans. I felt sorry for his kids, because he set up a school for his fellow far right conservatives, yanked them out of the public schools, and I hardly ever saw them again.

I name him now because I didn’t when I was a kid. When I was about ten years old, he took me aside, knowing that I was already a science nerd, and he showed me some flyers he was handing out. It included a cartoon of a gorilla, with a list of characteristics they shared with Negroes: Black. Thick curly hair. Thick lips. Yellow teeth. Emotional. Violent. Criminal. I had black friends at school, but they looked nothing like that. I was a science nerd, and I knew enough about gorillas to know that they were nothing like that. Every thing in that flyer was a damnable lie, and I knew it.

And that asshole looked at me and said, smugly, “Well, what do you think of that?” And I looked at him, my mind racing, tangled up with politeness and the respect I’m supposed to give my elders, and I mumbled something vaguely affirmative, and he let me go.

I’ve been ashamed of myself for about half a century for that. I knew he was a dishonest bigot even as a child, and I said nothing. The last time I saw him was at my father’s funeral, almost 25 years ago, and again I said nothing, not about his racism, not about his ignorant political views, not about his abuse of his children’s educations, nothing. I just avoided him. He told some nice stories about when my father was a boy. I just sat quietly to the side, seething, torn between avoiding a spectacle at the funeral and wanting to grab him by the scruff of the neck and ask him how many poisonous lies he’d told this week, before throwing him out the door.

This was in Kent, Washington, a fine suburban city in a thoroughly Northern state. My parents, fortunately, never expressed such odious views to me, but I had other relatives and friends who used all kinds of slurs casually; Henry Towne was just the worst of them. And he was so nice and polite about it! He could cheerfully, and in flawless, grammatical English, tell you the most vicious nonsense about any of your neighbors who weren’t sufficiently white, in his estimation.

Now I live in another fine Northern state, one with an excellent progressive reputation, and here is one of my neighbors, living just a few blocks away. 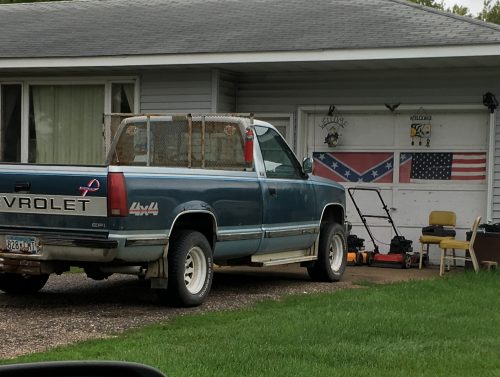 He has both a Confederate and American flag hanging in his garage. His truck has a sticker that says “God Bless America”.

There is a cancer at the heart of our country, and there it is, proudly displayed. My cousin, and this person, knew that they could express their bigotry with confidence, and no one would call them on it.

The scumbag who murdered Heather Heyer in Charlottesville is from Ohio. Richard Spencer was born in Boston. Milo Yiannopoulos is British. Tim Gionet, better known as “BakedAlaska”, is from Alaska. Mike Cernovich is from Illinois. Alex Jones is from Texas, so at least that one hate-filled loon is a Southerner. This bigotry is not a purely Southern phenomenon, it’s everywhere in America. We’re all of us complicit in white racism.

It is time to root it out.