Carl Zimmer writes about the muddled genetic state of race in the United States. We’re a mongrel nation, even if many people don’t want to admit it — but a recent analysis of data from the 23andme program shows a substantial mixing of races in the US. Well, except for Minnesota. Look how white we are up here! 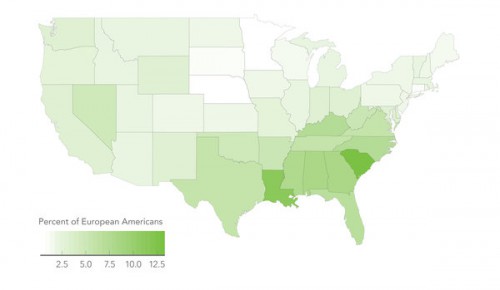 The percentage of self-identified European Americans who have one percent or more of African ancestry.

Actually, it’s more complicated than that. What that data says is that if you are a Minnesotan who claims to be white, you probably are a product of the mixed German and Scandinavian history around here — your family didn’t have much opportunity to mingle with anyone but Northern Europeans. But if you’re from South Carolina, your ancestors did have opportunities to mix with ancestors of other skin colors, and being human, they did. And at least among the population of 23andme subscribers, a significant fraction of Americans are less than pure-blooded.

On average, the scientists found, people who identified as African-American had genes that were only 73.2 percent African. European genes accounted for 24 percent of their DNA, while .8 percent came from Native Americans.

It makes it all rather silly to point at any one person and declare what their racial identity is based solely on the color of their skin — and it makes the continuing discrimination against people on the basis of such a superficial characteristic that much more unjust.