This is a map of all the American schools that are officially teaching creationism with the full permission of the state educational system, either through voucher programs or state laws that allow nonsense to be taught (Louisiana and Tennessee stand out as gangrenous spots, don’t they?). 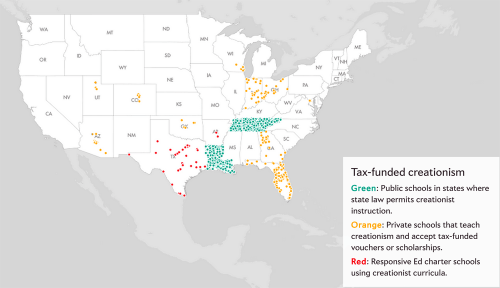 It minimizes the problem. Minnesota looks pure and clean, but that’s because our laws expressly forbid teaching creationism here…but that doesn’t mean that it isn’t snuck under the table. About a quarter of our teachers give instruction in creationism without state endorsement.