I’m trying to raise money for the The Leukemia &amp Lymphoma Society, and I promised to do a few things if we reached certain goals. I said I’d write a post explaining what oncogenes are, while wearing a pirate hat, if we raised $2500. So here you go, arrr.

If you want more, go to my Light the Night fundraising page and throw money at it. I’ll write the next part when we hit $5000. Note that we’re also getting matching funds from the Todd Stiefel Foundation, so join in, it’s a good deal.

Cancer is not a creative, original disease; it has not been honed by ages of evolution to craft novel lines of attack on your body. Instead, it’s an opportunistic thief. Cancer misuses and perverts existing processes in your cells to send them out of control. Everything cancer does is simply the same thing your cells normally do, only amplified and unconstrained, driven by damage to the genes that would normally regulate their behavior.

Here’s a metaphor, a car with a dangerous defect. It has acquired a glitch in the accelerator so that every time you start it up, it immediately roars up to full speed, as if you’d floored the pedal. The problem hasn’t created anything new in the car, it’s just taken something you normally need to do, that is, regulate the speed of the machine, and stripped you of all ability to control it. That’s what an oncogene does; it is a gene that is normally involved in controlling the rate of cell proliferation, for instance, and a mutation has broken it in such a way that it now tells the cell to divide as rapidly as possible.

Now if you were driving down the freeway and suddenly your accelerator were stuck and you couldn’t slow it down, you’d have alternative strategies to stop (and so does the cell). You could hit the brakes or shift gears or turn off the ignition key. Cancers acquire another set of mutations that destroy the ability to shut off cell processes, analogous to breaking the brake pedal or snapping off the gear shift handle. These genes that can block the effects of out-of-control cell regulators are called tumor suppressors, and I’ll write about those at another time. Today I focus on oncogenes, regulators of the cell that must be damaged by mutation to produce an excessive response.

The first concern that comes to everyone’s mind is that you don’t want to have your cells running amuck — no one wants cancer. Just as you can do your best to maintain your car, you can also live sensibly — eat in moderation, avoid carcinogens or other behaviors that expose you to radiation, and get regular checkups — to reduce the likelihood of deleterious mutations. But they can happen anyway, through no fault of your own. Every time your cells divide, there is a very small chance of an error in replication that inserts a mutation into an oncogene. Just existing, even while doing everything exactly right to maximize your health, brings with it a base chance for a mutation. Given normal rates of cell division, every single one of you reading this is going to acquire about 20,000 DNA lesions today and every day. Almost every one of them will be patched up by DNA repair mechanisms (you have no idea how important DNA repair is to your continued health), but even so, one will occasionally slip through — over your lifetime, your cells will acquire an estimated 10,000 mutations. Live long enough, playing these odds, and cancer is essentially inevitable.

So cancer is fundamentally a chance process. There is no reason people get cancer, no purpose behind it, and everyone is susceptible. Some behaviors can increase the odds — smoking, failing to use sunblock — and you can also inherit genetic predispositions that increase the likelihood of acquiring a full set of mutations that lead to cancer, but ultimately, no one is at fault for cancer.

So what can go wrong? The diagram below is a simplified illustration of the various signaling networks in the cell. These are some of the pathways by which cells are told to regulate their behavior. 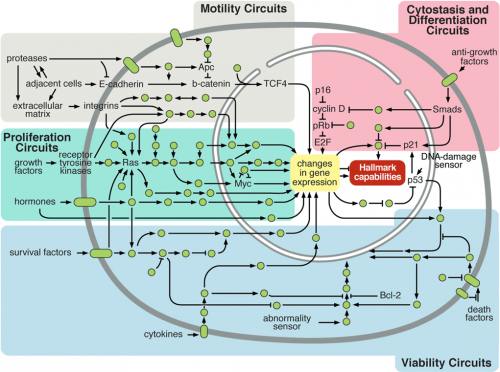 I’m going to focus on just the greenish box in the middle, the one labeled “Proliferation Circuits”, just to keep it simple. Think of that as the accelerator peddle for your cells. Sometimes your cells need to be encouraged to proliferate. For example, during childhood there are general signals to encourage stable patterns of growth, and during adolescence there may be novel hormonal signals to encourage new growth of selected populations of cells. If you’re injured, local growth factors are secreted to encourage cells to divide and repair the damage. So that’s what you’re seeing on the far left: growth factors and hormones can send a signal to the cell to give it permission to grow.

In order for a signal to be received, the cell has receptors on its surface that can bind to the growth factors and hormones. When a receptor binds to a signal, it changes to send a signal to other proteins (all those green circles) inside the cell. Think of it as like a doorbell; growth factor comes calling, presses the doorbell/receptor, the bell rings/sends a chemical signal into the interior, all the proteins get busy.

You can probably imagine how this system could get broken already. What if the receptor were damaged in such a way that it constantly sent a signal inwards, even if no growth factor were present (this is called becoming constitutively active)? What if one of the internal proteins were damaged in such a way to become constitutively active, so that it acted as if it were seeing the receptor as bound to a growth factor, even if it wasn’t? Now the cell is being constantly lied to by its sensory apparatus, and behaves as if it were being constantly told by the body to divide and divide and divide — it is on the road to being cancerous.

Let’s look a little bit closer at that pathway and give some of those green balls a name. This is the Ras-Raf signaling pathway. 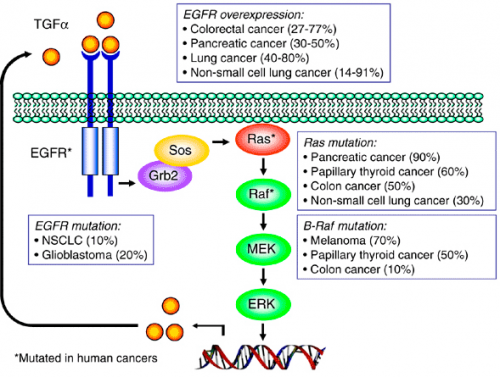 It’s a bit Rube-Goldbergian, but hey, that’s biology. In the top left corner you see something called EGFR, short for epidermal growth factor receptor. That’s our doorbell; the asterisk after the name in this diagram means that you see it mutated fairly frequently in human cancers. The box explains that it is seen to be damaged in 10-20% of certain kinds of cancers; when it’s mutated, it acts as if its signal, TGFα (Transforming Growth Factor Alpha) is always present. EGFR may also be perfectly normal, except that it is overexpressed, that is, present in a far greater number of copies on the cell surface, which makes the cell particularly sensitive to tiny quantities of growth factor. This happens even more frequently in many cancers.

The next steps in the pathway involve switching on Sos/Grb2, which activates Ras (look at the box; Ras is very commonly mutated in a great many cancers), which activates Raf, which activates MEK, which activates ERK, which promotes DNA replication. This is called a signaling cascade, and these kinds of sequences are all over the place in the cell. The advantages of this pattern is that many steps can be amplification steps, where one activated protein switches on many copies of the next protein in the sequence, and also each step is an opportunity for regulation.

Now be strong: I’m going to look even more closely at a key oncogene, Ras. Ras is important; it’s a central regulator of proliferative processes in the cell, and it is commonly one of the proteins made constitutively active in cancers. 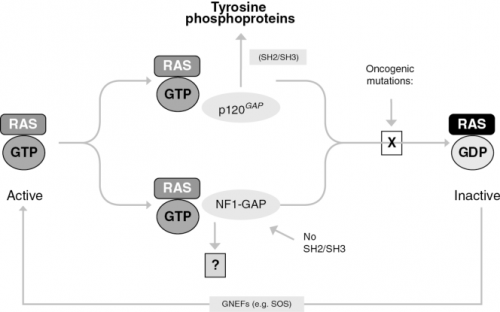 How is Ras switched on and off? In order to be active, Ras needs to be bound to a small molecule called GTP, guanine triphosphate, a base with three phosphate groups attached to it. It must be three; anything less, it isn’t active, so if it is bound to GDP, guanine diphosphate, it is inert. When it is bound to GTP, Ras changes shape to open up a binding site that can dock with the next protein in the chain, Raf, and activate it in turn.

Ras is switched on by the previous protein in the chain, SOS. SOS is a guanine exchange factor, and from the name, you can guess what it does: it swaps out the stultifying GDP molecule from Ras and replaces it with the energizing GTP molecule. Which allows it to bind with Raf, which then activates MEK, etc.

What switches Ras off? Ras is also an enzyme, specifically a GTPase — it cleaves its own GTP into a GDP. It turns itself off! What this means is that it acts as a kind of momentary switch. When a growth factor molecule arrives at the cell, Ras will respond by briefly initiating the cell division machinery, and then shutting itself down. It needs a sustained signal to keep cell division humming — a little triggering flicker of a random molecule bumping into the cell is not enough. This makes a lot of sense for cell cycle control. Ras is a reluctant activator, always hesitating and drawing back, and it needs constant prodding from external signals to keep doing its job.

Except when it’s mutated.

The most common cancer-inducing mutation in Ras is a single amino acid change in the 12th codon of its gene that greatly reduces the effectiveness of its GTPase activity. It binds GTP, becomes active, and then does not cleave the GTP — it clings to it instead. It switches from being a reluctant activator of cell division to instead being an avid, hyperactive activator — any transient signal, even a bit of noise, becomes an excuse to tell the cell to start dividing madly.

And that’s the beginning of a cancer, a rogue protein, made by an oncogene, that’s telling the normal, healthy cellular machinery to do its thing when it shouldn’t.

There’s much more to cancer than that, of course — cancer is more than just excessive cell division, and also the cell has many fail-safes, the tumor suppressor genes, that are supposed to put the brakes on when renegade proteins are going wild. But — oh, and this is cruel of me — to hear that part of the story, you’ll have to donate to my Light the Night fundraising page. When we get to $5000, I’ll tell you all about tumor suppressors.

Now I understand…it’s all your fault! » « Skepchick joins the race