Here’s how we end our dependency on fossil fuels: once it gets hot enough, we won’t be able to pump gas anymore!

The country’s all-time record of 123.26 degrees Fahrenheit was set in 1960 at the Oodnadatta Airport in Southern Australia, but it’s already so hot that people can’t even pump gas. Nikki Staskiewicz and Angela Blomeley were stranded in Oodnadatta — which bills itself as “the driest town [in] the driest state of the driest country” in the world — when they tried to fill up their tank, only to find the fuel vaporizing in the triple-digit heat.

I think gasoline vaporizes at around 60°C…so that’s plausible if their car had been baking in the sun for a while. Watch out for sparks!

It looks like it’s getting a bit warm down under. They had to add new colors to the temperature spectrum. 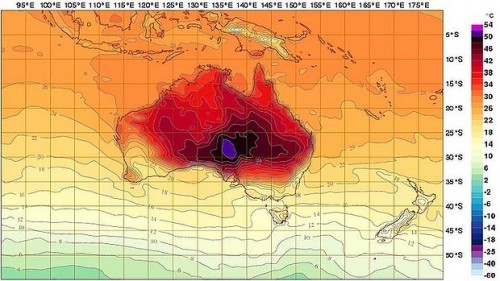