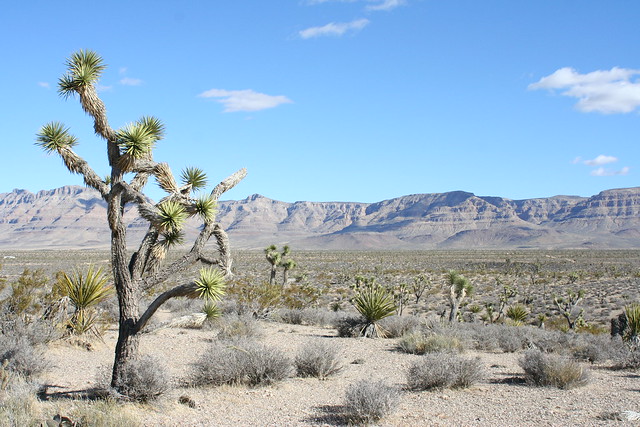 In the course of writing a piece this week for KCET on the possibly upcoming Joshua tree mating season, I found a paper entitled “Asymmetric hybridization and gene flow between Joshua trees reflect differences in pollinator host specificity,” published in the most recent issue of Molecular Ecology*. You know the feeling you get when your area of expertise gets upended and you have to fit a new, fun piece of information into your worldview? This paper did that for me.

There are a couple of things  you need to know about Joshua trees to make sense of the paper.  First is, as I said in the KCET piece this week, the intimate relationship between the tree and its insect pollinator:

In years where the Joshua trees have gotten enough winter water and a good freeze, some of the leaf buds at the ends of those ungainly branches will turn into flower buds. Between late February and April, those flower buds will open into big, tight clusters of cream-colored flowers.

At about the same time, legions of little dusky yucca moths will emerge from the ground and flit around the blossoms. The moths mate, and then the females get to work pollinating the Joshua tree’s flowers. It’s a remarkable process: the females have specially evolved tentacles near their mouths, unique in the insect world, with which they collect pollen and pack it into little balls. They then move from flower to flower, take a bit of pollen off the ball and wedge it into the floral ovary, thus fertilizing the flower.

After pollinating each blossom, the female moth then lays a single egg inside the ovary. As the fruit develops, that egg hatches out and the moth’s larva starts eating the developing seeds. By the time the Joshua tree’s dry, husky fruit is ripe that larva will have eaten about a fifth of the seeds in it, whereupon it emerges from the husk, falls to the base of the tree, and then burrows into the ground to pupate.

An interesting point I mostly left out of the KCET piece: this behavior on the part of the moth is unusual in the insect world. Most insect pollinators transfer pollen more or less inadvertently: they accidentally collect pollen on their bodies as they visit a flower for one reason or another, and then they accidentally leave some of it in the next flower they visit. Yucca moths’ behavior, by contrast, is volitional — assuming we can ascribe volition to an organism with the approximate mentative power of a keychain LED torch. The female yucca moth carefully wraps pollen into a ball with her maxillary tentacles, then just as carefully takes pieces of that ball of pollen and wedges them into clefts in various flowers’ ovaries.

Like I said, it’s roughly the consensus that the eastern and western Joshua tree populations are subspecies, but in 2007 Lee Lenz of the Rancho Santa Ana Botanic Garden in Claremont, California suggested that the two populations be declared full species in their own right: Yucca brevifolia for the western trees and Yucca jaegeriana for the eastern.

There were two main reasons for Lenz’s splitting Joshua trees into two species. The first was general morphology. Jaegerianas are smaller of stature than their western siblings, and they have a growth habit the botanists refer to as “dichotomous branching,” which means that a growing bud at the end of a branch will every now and then split into two growing buds, each one growing into its own section of stem. Western Joshua trees branch only when forced to: when frost or insect damage kills the branch’s terminal bud, or when that bud turns into a flower bud. As mentioned above, the leaf length also differs between the two populations, and there are smaller differences in the structure of flowers and fruit in the western and eastern trees to boot.

But the other reason Lenz suggested splitting Joshua trees was a difference in each tree population’s relationship with its moth. For some time it was assumed that Joshua trees across their range were pollinated by the yucca moth species Tegeticula synthetica. Some years back lepidopterist Olle Pellmyr from the University of Idaho at Moscow noticed that some individual trees of the jaegeriana persuasion were being pollinated by a moth that was very definitely not Tegeticula synthetica: it was distinctly smaller than T. synthetica, as befit a moth pollinating the smaller race of Joshua trees. Pellmyr found that this new moth species was pretty much the sole pollinator for Yucca brevifolia jaegeriana, and to set it apart from Tegeticula synthetica he named the new moth Tegeticula antithetica. Which just proves you can never get so far into the desert that you escape the long arm of Hegelian dialectics.

So Lenz’s point was that each tree had its own distinct pollinator, each fitting the floral morphology of its respective tree, and that that implied reproductive isolation, which implied a species split. All well and good.

But Lenz’s paper contained no new research: it was a review and analysis of previous literature. Lenz merely speculated that the differences in moth anatomy would preclude breeding between the tree populations. To really test his hypothesis, you’d need a laboratory in which mature Joshua trees of each population grew side by side each with their respective moth species, and an experiment running long enough to provide a generation or two of offspring.

As it happens, a spot in central Nevada provides just such an experiment, already in progress.

The two populations of Joshua tree are generally separated by a hundred miles or more, but in the north part of each subspecies’ range they meet in just one long, narrow valley, just east of Area 51: the Tikaboo Valley. In the Tikaboo Valley, both tree subspecies grow side by side, flowering at more or less the same time and visited by clouds of the two species of Joshua tree moths. 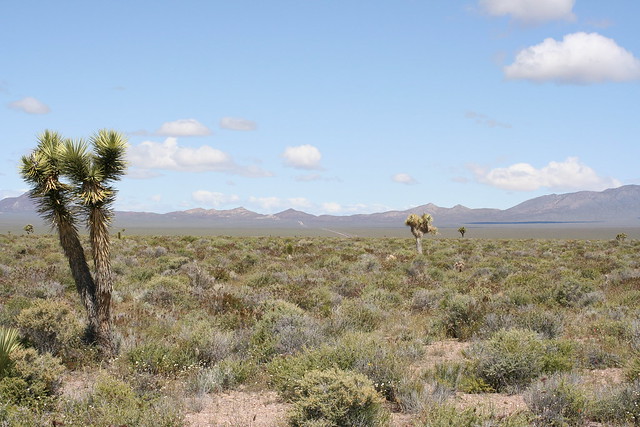 Joshua trees in the Tikaboo Valley

Which is where this month’s paper by Smith et al comes in.  Some of the Tikaboo Valley trees are clearly of the eastern population, and some clearly western, but a lot of them are ambiguous, with characteristics that could fit in either group. Smith et al found, after recording morphological and genetic data for a couple hundred of the trees and crunching the numbers, that quite a few of the ambiguous trees were indeed hybrids between the two subspecies.

This is almost certainly due to behavioral differences in the two moth subspecies. Previous work in the Tikaboo Valley by Smith and others has suggested that the western Joshua tree moth doesn’t pollinate the eastern trees very effectively, almost never resulting in viable moth larvae, while the eastern moth does just fine pollinating and ovipositing in the flowers of western Joshua trees. This may be due to something as simple as the western moth being larger, and therefore less able to fit into the eastern trees’ flowers to pollinate and lay eggs.

In any event, it’s an interesting spin on reproductive isolation. You generally think of populations being able to breed together, or not. You don’t usually think of a pair of populations one of which can breed with the other, but not the other way around. Apparently, tentacles sometimes just don’t fit where you want them to.