The major cataclysm that struck my inbox was, of course, that silly incident with a cracker. I still get hate mail from Catholics, and intermittently still receive politely horrified regular mail from little old Catholic ladies who want to pray for me.

But the second biggest outrage I ever perpetrated may not have caught the attention of most readers: I criticized Ray Kurzweil! I still get angry email from people who stumble across this post I originally wrote in 2005, and are really pissed off that I think Saint Kurzweil is a charlatan.

“Singularly silly singularity” – You have much in common with the creationist you so despise.

For a PhD and self-proclaimed intellectual you show an utterly remarkable incapability to understand what the Singularity even is, though this does not stop you from attacking it in the cocksure fashion of the creationist attacking evolution as what he believes is the direct conversion of ape into man.

The Singularity, though inextricably related to the increasing rate of technological advancement, IS NOT a statement that this acceleration alone will lead to the sorts of things Kurzweil proposes. The Singularity is describing what occurs after the creation of a smarter-than-human artificial intelligence. By it’s very nature the workings of this AI’s ‘mind’ will be unintelligible to us. This incapability of understanding, which will compound upon itself as the AI makes advances and improvements of it’s own, acts as an ‘event horizon,’ (I should take this moment to point out that you would do well to learn what a gravitational singularity is, as it may help you understand why you are so off the mark in your incorrect understanding of the Singularity) obscuring the ability to make predictions about what course the future will take.

I’ll even grant you the underlying argument of your article opposing Kurzweil’s “Countdown to Singularity” graph (even though you clearly do not understand log vs. log graphs, which cannot be extended into the future). Stating that there is no trend of the acceleration of the rate of technological advancement DOES NOTHING to disprove the existence of the Singularity as the Singularity is a statement about what happens AFTER the creation of faster-than-human AI and not about what happens before it.

You should perhaps try thinking rather than just knowing.

You know, I appreciate the fact that there is an increasing pattern of technological change — I’ve lived through the last 50 years, where we’ve gone from computers being vast arcane artifacts that cost millions of dollars to plod through mundane calculations, to being stupid little machines that let us play pong on our televisions, to becoming the routine miracle that we now use to process all our media and communicate with our friends. I get that. I do expect to be dazzled over the next few decades (if I live that long) as new technologies emerge.

But predictions of incremental advances on the basis of past experience are routine; predictions of a single, species-defining moment of radical transformation for which there are no predecessors is a data-free assumption. It can’t be justified.

Despite my correspondent’s claim that the source for the claim of a singularity is not accelerating technological advancement, that’s all Kurzweil talks about: the entire first third of The Singularity is Near (yes, I have a copy…it’s even a signed copy that he sent to me!) is a repetitive drumbeat of graphs, graphs, graphs, all showing an inexorable trend: per capita GDP, education expenditures, nanotechnology patents, price-performance for wireless data devices, on and on. That really is the foundation of his whole argument: technology advancement is accelerating, therefore we’re going to get immortality before we die. All you have to do is hang on until 2029.

What really bugs me about Kurzweil is that he blatantly fudges his data. I picked on this chart before: the data is nonsense, comparing all kinds of events that don’t really compare at all — speciation is equivalent to Jobs and Wozniak building a computer in a garage? Really? — and arbitrarily lumps together some events and omits others to create points that fit on his curve. Why does the Industrial Revolution get a single point, condensing all the technological events (steam engines, jacquard looms, iron and steel processing, architecture, coal mining machinery, canal building, railroads) into one lump, while the Information Revolution gets a finer-grained dissection into its component bits? Because that makes them fit into his pattern. 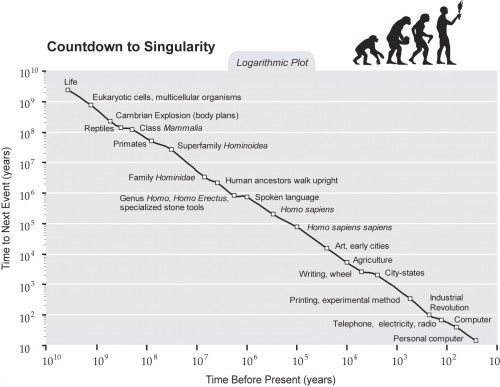 He also shows this linear plot of the same data, which I think makes the problem clear. 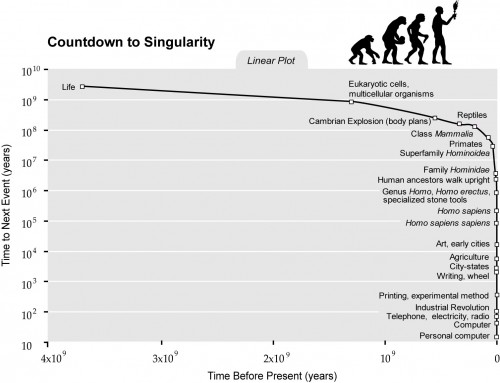 It’s familiarity and recency. If a man in 1900 of Kurzweil’s bent had sat down and made a plot of technological innovation, he’d have said the same thing: why, look at all the amazing things I can think of that have occurred in my lifetime, the telegraph and telephone, machine guns and ironclad battleships, automobiles and typewriters, organic chemistry and evolution. Compared to those stodgy old fellows in the 18th century, we’re just whizzing along! And then he would have drawn a little chart, and the line would have gone plummeting downward at an awesome rate as it approached his time, and he would have said, “By Jove! The King of England will rule the whole planet by 1930, and we’ll be mining coal on Mars to power our flying velocipedes!”

Buy more stuff. » « Wait — you mean I don’t have an undersea throne room?