Charles Babbage wrote a paper to the Royal Astronomical Society on June 14, 1822, announcing the Difference Engine.  It was the first mechanical calculator and precursor to the computer.  While Babbage failed to produce both the Analytical Engine and Difference Engine that he had designed, it was not failure in himself but failure in the technology of the day (think “Back To The Future III” and that huge box of vacuum tubes on the front of the Delorean).

This picture is from the Science Museum of London: 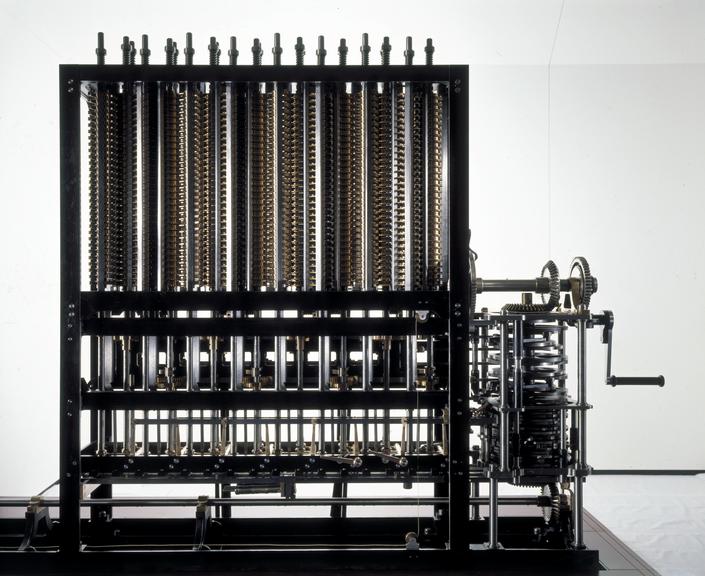 The man who invented the computer but never built one

Charles Babbage (1791-1871) was a man of many interests. He achieved notable results in cryptography, invented the cow-catcher for trains and engaged himself in public campaigns against nuisances, including the dangerous practice of boys running their iron hoops underneath horses. Today, he’s most famous for his pioneering efforts in computing. Like Alan Turing, Babbage invented the computer from scratch but never managed to build one. And also like Turing, his intellectual tour de force was only truly recognized after his death.

Over his lifetime, Babbage envisioned several mechanical calculating machines he called engines. The first one, the Difference Engine, was designed to solve polynomial equations using the mathematical technique of finite differences. This method reduces multiplication and division to addition, which is much easier to implement with the rods, gears, levers and linkages that were at the disposal of the Victorian-era gentleman-engineer. Two hundred years ago this week, Babbage presented his first paper on the Difference Engine to the Royal Astronomical Society, kicking off a visionary if troublesome pursuit that inspires awe even today.

There are other articles on Babbage and his invention:

History Extra: Why we should remember the public announcement of the Difference Engine

In 1985, nearing the 200th anniversary of Babbage’s birth, funding was provided to build the Difference Engine according to his designs, and it was completed by 2002.  It worked.  If the quality of parts machining available in the 20th century had been available in the early 19th century, the industrial revolution and world political history (e.g. the use of the DE for artillery measurement and firing) would have been very different.  From the Computer History Museum:

In 1985 the Science Museum in London set out to construct a working Difference Engine No. 2 built faithfully to Babbage’s original designs dating from 1847-9. The project was led by the then Curator of Computing, Doron Swade. The purpose of the project was both to memorialize Babbage’s work in time for 200th anniversary, in 1991, of Babbage’s birth, and at the same time to resolve two nagging questions: could Babbage have built his engine, and had he done so, would it have worked?

The completed machine works as Babbage intended. Its 8,000 parts are equally split between the calculating section and the output apparatus. It weighs five tons and measures seven feet high, eleven feet long and is eighteen inches deep at its narrowest. As a static object it is a sight to behold – a sumptuous piece of engineering sculpture. In operation it is an arresting spectacle.

To Air Is Human; To Forgive, Divine: The Max Headroom hack of 1987 » « Exceptionally Repugnant, I’d Say: Three years is a light sentence for a double murder