The C64 was first displayed at the Consumer Electronics Show, January 7–10, 1982.  It became available in stores in August 1982, and was only discontinued in 1994.  Over those twelve years, the C64 sold (depending on whose estimates you believe) anywhere from ten million to thirty million units.  Even at the low end, the C64 is the best selling computer of all time.

This is why the C64 has not increased greatly in value despite the nostalgia craze of recent years.  Millions of them have survived, making them easy to find on the market.  The real value in them, and what set the C64 apart from all other computers of its era, is the SID chip. 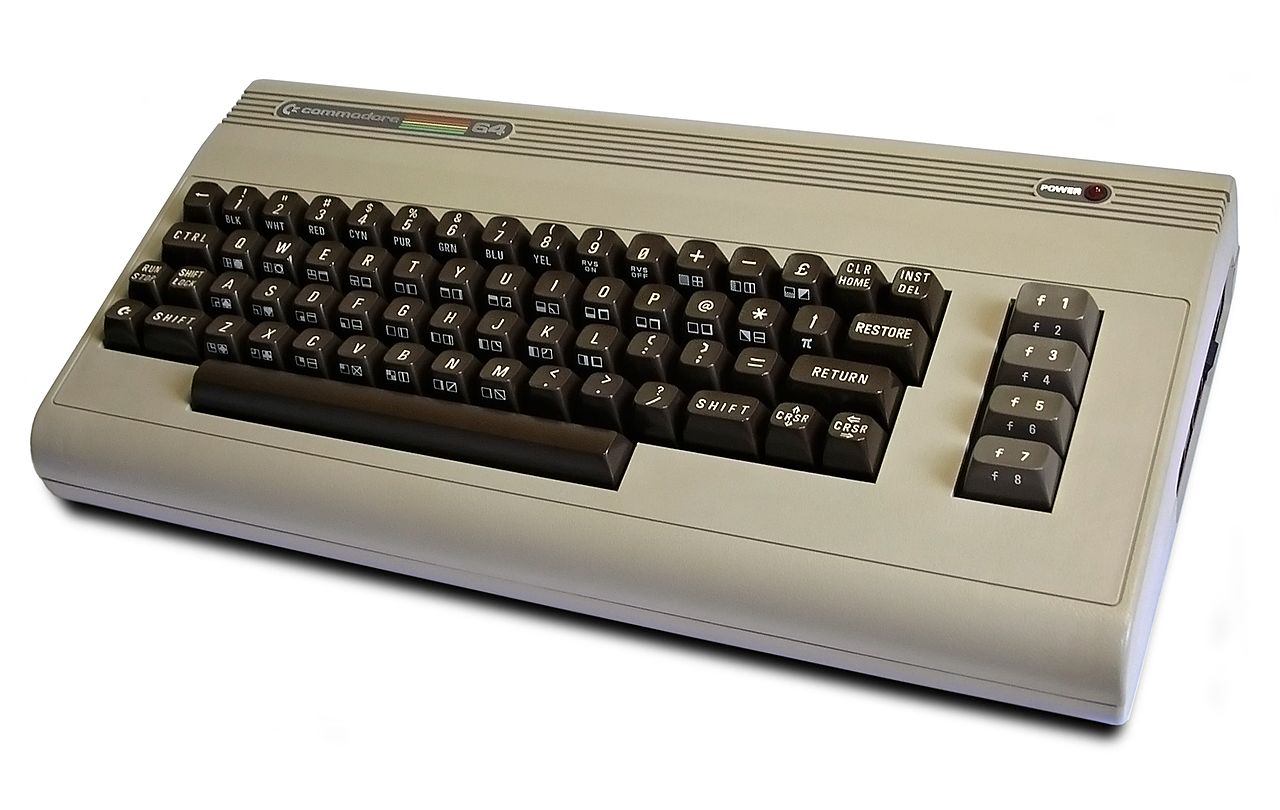 The SID chip (or MOS Technology 6581/8580 Sound Interface Device, to use its full name) was arguably the first general use and popularly used sound chip.  It was capable of three sounds simultaneously, eight octaves, ADSR envelopes, four different waveforms, a random number generator, and other features.  The C64 was capable of sounds that weren’t matched until the Tandy 1000 series and later dedicated sound cards like the Adlib and Soundblaster.

The three voices of the SID were not fixed, and could be changed on the fly.  This allowed creative composers to change each voice constantly, giving the illusion of more than three voices.  Kits exist now that allow people to combine two SID chips into one C64 and have six voices (video: 8bit Guy). But that means raiding old C64s and leaving them without chips.  MOS Technology ceased producing SID chips years before it went out of business in 2001.  C64 fans thought the supply of SID chips was limited until the SwinSID was created.  While not a perfect clone of the 6581 or 8580 chips (video: Adrian’s Digital Basement), the SwinSID is reportedly 99% compatible, making it a suitable modern replacement.

The C64 was also capable of advanced graphics for its time, with sprites, scrolling, bitmaps and other features.  It’s even possible to browse the internet with the C64 using the Contiki operating system and the CaTeR unix/linux terminal for the C64 (with CaTeR).  or even the 64NIC+ card or other terminal software and dedicated hardware.  If you don’t want to use the built in Basic-based operating system, there are others such as GEOS (from the 1990s) and Final Cartridge III (from 2019) or C64OS (2021).  Sadly, while CP/M was available for the C64 and it worked, few examples exist because it failed in the marketplace.

The biggest failure of the C64 had to be its floppy disk drive.  Unlike the Apple II which was fast and easy to use, the C64’s commands were obscure and the drive was slow.  There were fastloaders available which increased performance, but these were after market cartridges which meant they were best used for file transfers or playing disk-only games.  Today, you can get Flash memory card loaders like the SD2IEC.

Below the fold are a few links to videos of the C64’s history.  But more important, how the C64 changed electronic music, both how its made, and how game music influenced a generation.

Again, the music is the real story of the C64.

8 Bit Weapon are a chiptune group from California who have worked with DEVO and Kraftwerk, among others.  They produce music solely using 1980s 8bit computers, primarily the Commodore 64 and Apple II.  Here a two of their compositions available on youtube, “Closer” (an electronic dance track) and “C64 Disassembly Language: Phase I – Lexical Analysis”, a 13 minute ambient work.

Rob Hubbard is a British composer who created the music for many C64 games of the 1980s.  Constrained by the minimal three voices, limited types of sounds and limited memory, he still managed to create soundtracks that were memorable and sophisticated.  In 2019, Hubbard’s works were orchestrated and played by the Hull Philharmonic Orchestra.  A sample of the performance is below, and the full orchestral recording is available for purchase.

There are also fan-made collections of Commodore 64 game music:

The definitive Top 10 C64 music of all time

I Hate When I Forget: Banting’s discovery of Insulin is 100 years old » « I Can’t Wait To See All The TERFs’ Heads Explode