You can tell a lot about a media’s agenda, who it’s beholden to, which advertisers dictate it’s editorial view by the stories it publishes.

Two items were recently published about Paris after the decision to ban cars from many roads and create pedestrian and bicycle spaces while limit speeds on other roads.  One appeared in the New York Timid Times, the other in Slate (hardly the bastion of objectivity, but the lesser of two evils here).  You can guess how this one is going to turn out.

On Friday, the NYT published this tripes, claiming cyclists are terrorizing public streets and making it unsafe to be a pedestrian.  As if it were safe to walk with cars speeding down alleys at 50kmh.  The US “car culture” mentality and obedience to corporate interests (big three and big oil) are evident throughout.  It’s all unsubstantiated anecdotes and accusations, full of scare words like “socialist”, and sparse on facts.

As Bikers Throng the Streets, ‘It’s Like Paris Is in Anarchy’

An ecologically minded experiment to make Paris a cycling capital of Europe has led to a million people now pedaling daily — and to rising tensions with pedestrians.

PARIS — On a recent afternoon, the Rue de Rivoli looked like this: Cyclists blowing through red lights in two directions. Delivery bike riders fixating on their cellphones. Electric scooters careening across lanes. Jaywalkers and nervous pedestrians scrambling as if in a video game.

Sarah Famery, a 20-year resident of the Marais neighborhood, braced for the tumult. She looked left, then right, then left and right again before venturing into a crosswalk, only to break into a rant-laden sprint as two cyclists came within inches of grazing her.

“It’s chaos!” exclaimed Ms. Famery, shaking a fist at the swarm of bikes that have displaced cars on the Rue de Rivoli ever since it was remade into a multilane highway for cyclists last year. “Politicians want to make Paris a cycling city, but no one is following any rules,” she said. “It’s becoming risky just to cross the street!”

Mayor Anne Hidalgo, who is campaigning for the French presidency, has been burnishing her credentials as an ecologically minded Socialist candidate. She has earned admirers and enemies alike with a bold program to transform greater Paris into the world’s leading environmentally sustainable metropolis, reclaiming vast swaths of the city from cars for parks, pedestrians and a Copenhagen-style cycling revolution.

She has made highways along the Seine car-free and last year, during coronavirus lockdowns, oversaw the creation of over 100 miles of new bike paths. She plans to limit cars in 2022 in the heart of the city, along half of the Right Bank and through the Boulevard Saint Germain.

Parisians have heeded the call: A million people in a metropolis of 10 million are now pedaling daily. And Paris now ranks among the world’s top 10 cycling cities.

But with success has come major growing pains.

“It’s like Paris is in anarchy,” said Jean-Conrad LeMaitre, a former banker who was out for a stroll recently along the Rue de Rivoli. “We need to reduce pollution and improve the environment,” he said. “But everyone is just doing as they please. There are no police, no fines, no training and no respect.”

Back on the Rue de Rivoli, cyclists swerved to avoid pedestrians playing a game of chicken with oncoming bikes. “Pay attention!” a cyclist in a red safety vest and goggles shouted at three women crossing against a red light, as he nearly crashed in the rain.

Cyclists say Paris hasn’t done enough to make bike commuting safe. Bike accidents jumped 35 percent last year, from 2019. Paris en Selle, a cycling organization, has held protests calling for road security after several cyclists were killed in collisions with motorists, including, recently, a 2-year-old boy riding with his father who was killed near the Louvre when a truck turned into them.

So the father was at fault for not getting out of the way of the truck, not the truck for failing to obey the law and ensure it could turn safely?  How very auto-cratic of you, Ms. Alderman.

And “everyone is doing as they please with no respect”?  As if drivers ever do.  They act like no one has the right to be outside a building safely except inside a vehicle.

Now compare this with the Slate article from September 15:

The Liberation of Paris From Cars Is Working

Over the past six years, Paris has done more than almost any city in the world to take space back from cars. Mayor Anne Hidalgo has opened linear parks in the old highways along the Seine, phased out diesel cars in the city, opened bus lanes, raised parking meter prices, and plowed bike lanes down hundreds of streets. When COVID hit, Paris eliminated cars from the Rue de Rivoli, its major crosstown thoroughfare. Plans are in the works to pedestrianize the Champs-Elysées and plant thousands of trees to green, clean, and cool the city.

As the adjunct mayor for transportation and public space, David Belliard is the point man for many of these endeavors. His latest projects include establishing car-free zones outside schools and enforcing the capital’s new speed limit of 30 kilometers per hour—a notch below 20 mph.

Earlier this month, I met him in his office to talk about Paris, COVID, and cars. Our conversation has been edited and condensed for clarity.

David Belliard: You want an overview?

OK, quickly: At the start of the 20th century, in the ’20s, ’30s, the car asserts itself as a travel mode in urban centers, which are transformed. Paris is clearly an old city with many centuries of history with an urban fabric. Even though it was transformed by Haussmann in the 19th century, it has an extremely dense urban fabric with a lot of small streets and a configuration a priori not adapted to the auto. When the car arrives, we transform what we can call public space, and this public space becomes automobile space, with the logical system of the car imposing itself in Paris. And public space is completely devoured, eaten away, and in a certain way privatized to one single, unique use.

The excerpts continue below the fold.

Starting in the ’90s, the negative externalities become more and more obvious, in terms of deaths and injuries on the road, danger for children and older people, and air pollution. The right-wing mayor started creating bike paths. But when I arrived in 2001, 2002, I bought a bike at once, and it was war. It was really difficult to ride in Paris, and I never felt secure. They built bike paths, and we called them “death paths.”

You mention that he was right wing to show it was not a political project?

It was a general movement. We elected officials on this proposal to give up less space to cars. Reserved bus lanes were an absolute scandal. Bike lanes really started in 2015. We’re in a situation where climate change is accelerating, which manifests in heat waves of 107, 109 degrees, and 122 degrees in 10 or 20 years. That means we won’t be able to live in Paris if we don’t do anything, because the city is too vulnerable right now.

Parisian public space is rare, precious, and very useful. It belongs to everyone and it can’t be captured by one unique usage, which is the automobile. Today, still, 50 percent of public space in Paris is consecrated to the car, whether it’s on the road or parked. That represents just 10 percent of trips.

You don’t think there’s an element of social exclusion? Paris is a small part of the metropolis, it’s the most expensive place to live, so by limiting parking and the entry of private cars, you favor people who already live in Paris, while people who live in the banlieue might find access to Paris more limited.

Who lives in Paris? Nothing against you, but you presupposed that everyone in Paris is rich, which isn’t true. In Paris, like many urban centers, you have great social inequalities. More than 20 percent of the 19th arrondissement [a large, outer district on the city’s eastern edge] lives below the poverty line. Who uses their car today? Generally, and especially when you take out businesses, it’s the rich. One in three Parisians has a car. In the 20th, the level falls toward 15 percent. On the other hand, in the 16th, a neighborhood that’s much more bourgeois, it’s closer to one per household. It’s the same thing in the suburbs.

Fifty percent of public space is occupied by private cars, which are used mostly by the richest, and mostly by men, because it’s mostly men who drive, and so in total, the richest men are using half the public space. So if we give the space to walking, biking, and public transit, you give back public space to the categories of people who today are deprived.

The difference in attitudes is night and day.

The US suffers sa-traffic panic (my coined phrase) at the thought of any space being reallocated and devoted to cyclists and pedestrians.  Meanwhile, Paris’s move is both wanted and welcomed by its citizenry.  They voted for it.  The only people who will “lose” from Paris’s change of road usage are the wealthy, a tiny fraction of the population.  And they can still take public transit.

This is what the US calls “car freedumb”: 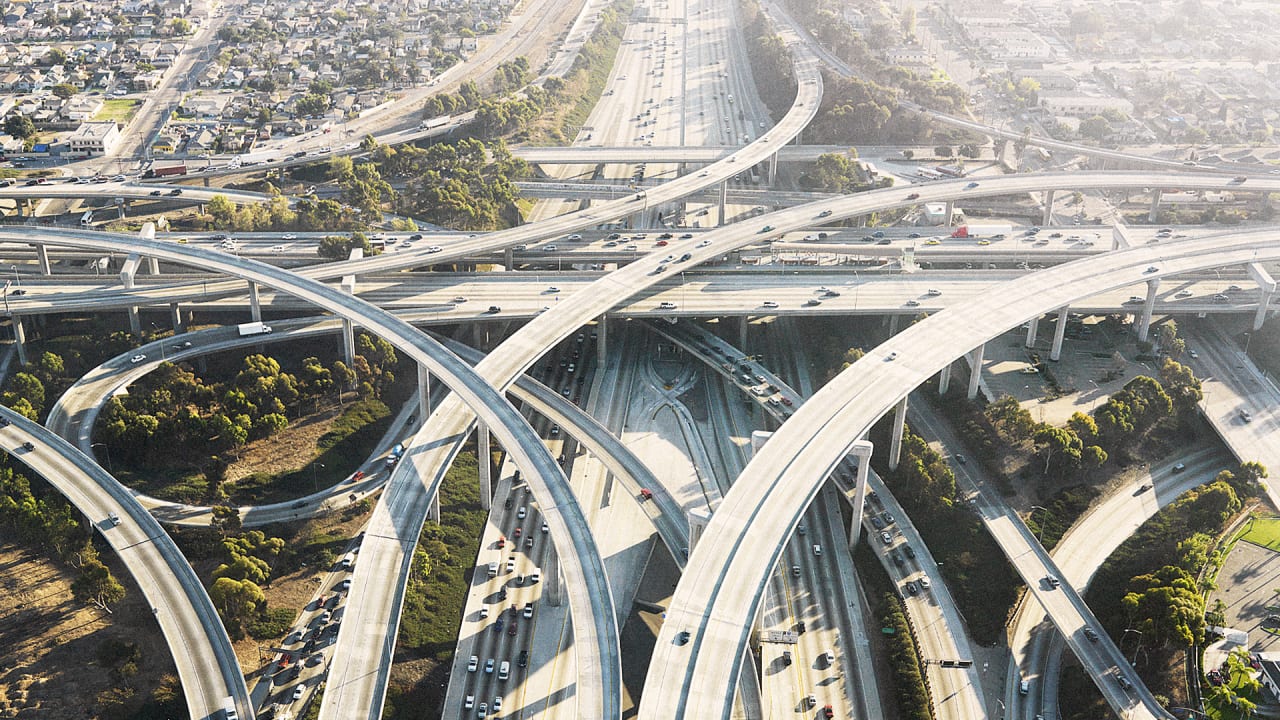 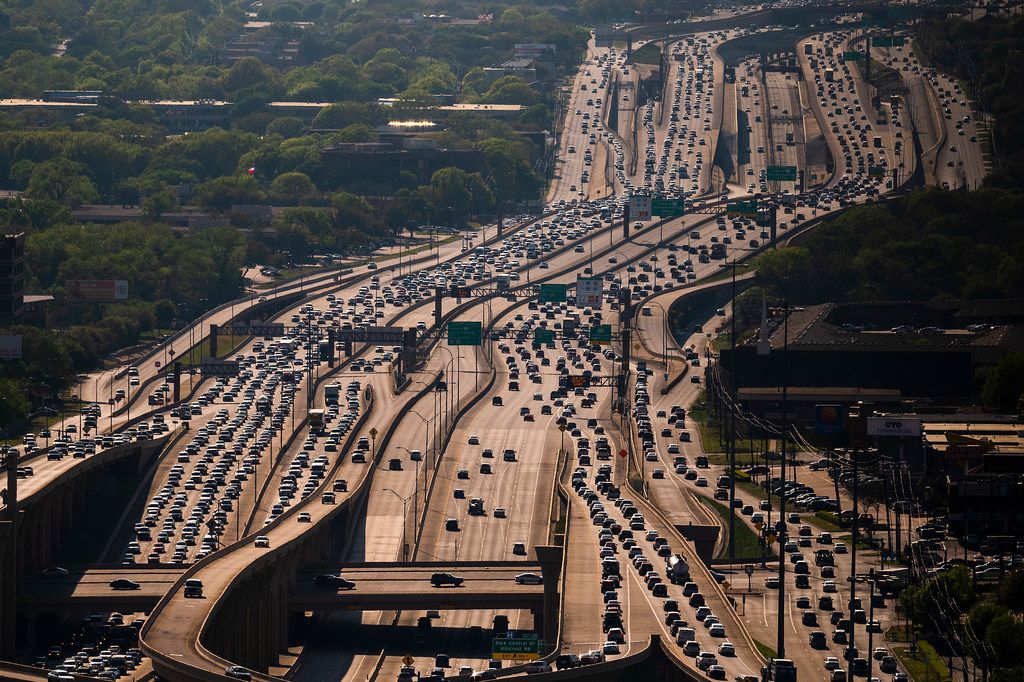 While the New York Times calls la nouvelle Paris “communism and bicyclist terrorism”.  Where would you rather live? 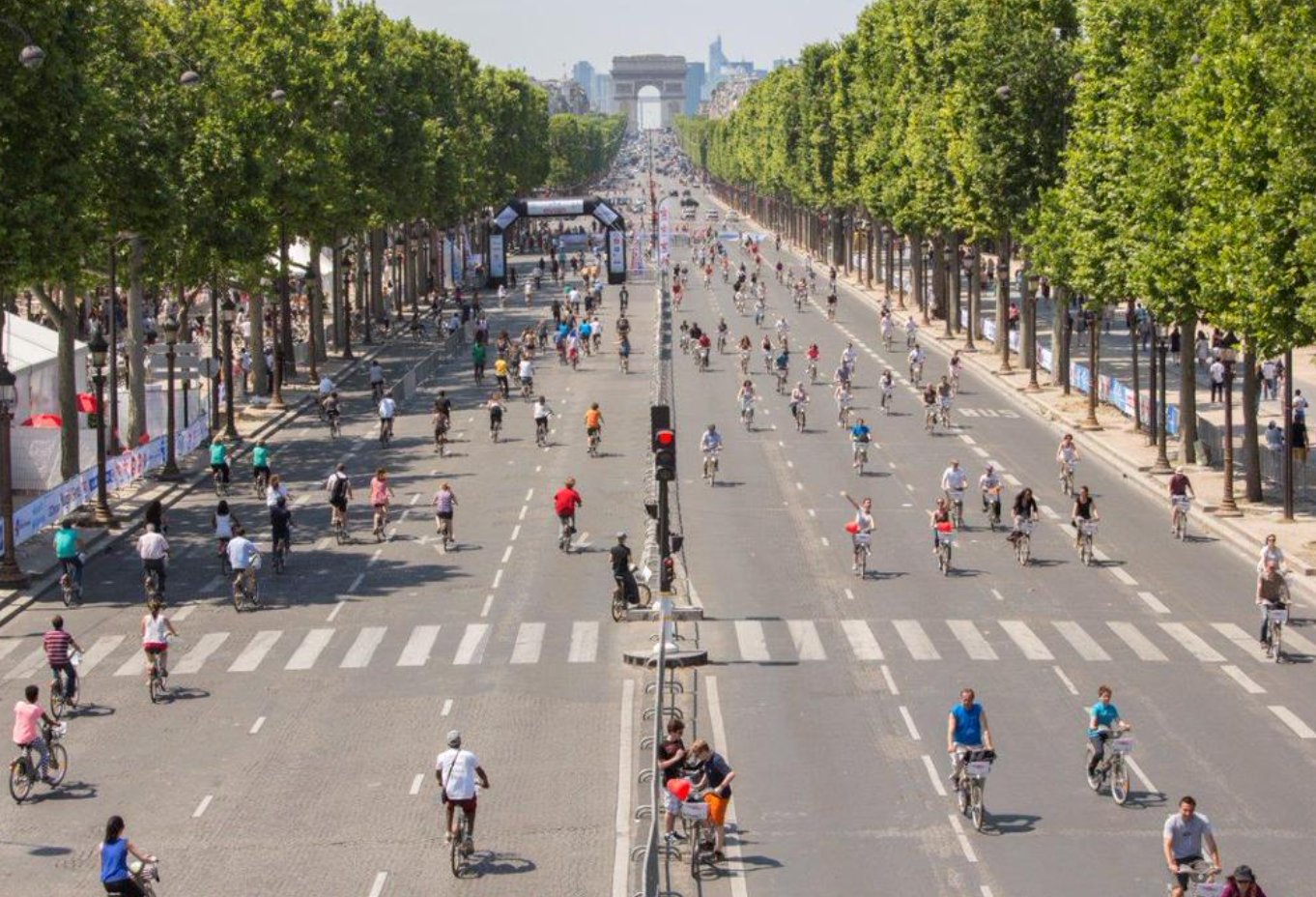 On a brighter note, Melanie’s number one hit “Brand New Key” came out fifty years ago this month, October 1971.  “I ride my bike, I roller skate, don’t drive no car / Don’t go too fast but I go pretty far.”  Exactly.  What is this incessant need for speed that only requires more resources and makes everyone unsafe?

Let’s be honest.  What’s pictured below is NOT “pedestrian infrastructure”, it’s car infrastructure.  It’s designed to let cars go fast, NOT to let pedestrians cross safely and efficiently with minimal effort.  If you disagree, explain how someone using a wheelchair can use it, an elderly person, a mother with a baby carriage.

It would have cost less to build and maintain a street level crosswalk with gates that lower and prevent vehicles from progressing.  How many kids have been hit or murdered by cars, coming and going from that park? 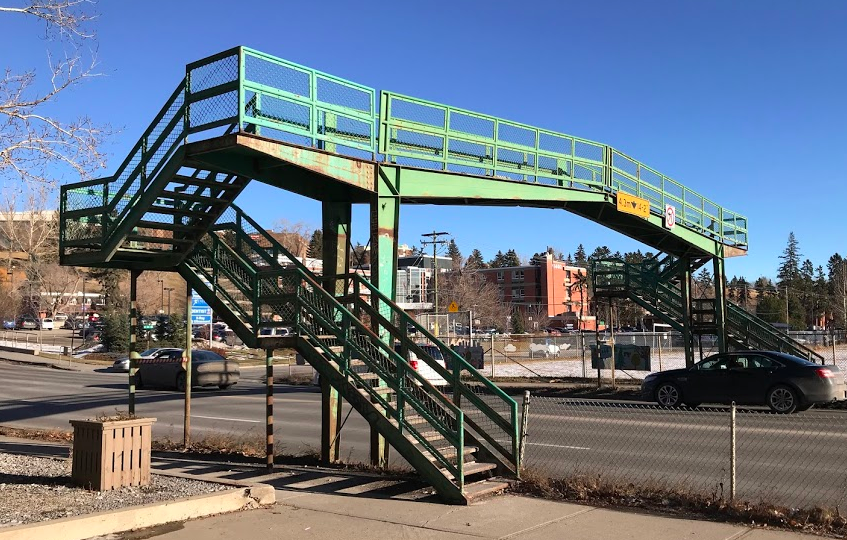 Akin To Rape: His words motivate every anti-abortion law today » « Finally He Retires: But his replacement won’t be an improvement